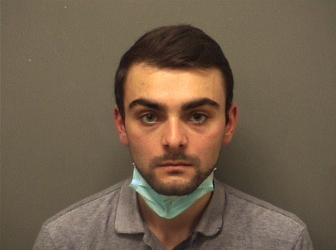 Quinten Yonkers appeared Wednesday in state Superior Court in Stamford on new felony charges that included two counts of risk of injury to a minor, two counts of promoting a minor in an obscene performance and one count of fourth-degree sexual assault.

According to a New Canaan Police arrest warrant application signed Aug. 18 by Superior Court Judge William F. Clark, Yonkers during a confession interview that day at his Weed Street home was asked by investigators “if he had ever been alone with children and/or did he inappropriately ever touch any child.”

“He did state that he had babysat the two children of a Darien family on many occasions,” according to an affidavit from New Canaan Police Officer Michael O’Sullivan, a 21-year veteran of the department who works in its Investigative Section. “Quinten denied inappropriately touching the children.”

According to a press release issued Wednesday by Darien Police, detectives determined through interviews and analysis of Yonkers’s devices that he “had been in contact with minors who reside in Darien for an extended period of time.”

“Further investigation revealed evidence that Yonkers had made inappropriate and unlawful contact with, and had taken and video/images of, the aforementioned minors,” the press release said. Darien Police obtained an arrest warrant Tuesday. Yonkers turned himself into Darien Police at 6 p.m. the same day.

Court officials said following Wednesday’s arraignment that the file on the Darien case is to be sealed through Sept. 7 because it contains sensitive information.

Criminal defense attorney Mark Sherman, who is representing Yonkers in New Canaan and Darien, declined to comment on case specifics, but said in a statement that his client likely would plead not guilty during his next scheduled court appearance on Oct. 26.

“It’s an extremely sensitive case,” Sherman said in the statement. “We will be reviewing police reports and working toward a fair resolution as quickly as possible.”

About one month later, on June 21, O’Sullivan received the results of a ex parte order that had been served on Frontier Communications for activity between October 2020 and April 2021, the affidavit said. The account associated with the Norwalk IP address was traced to a Japanese restaurant in that city, later identified as Haruki, where Yonkers worked at the time as general manager.

On July 7, O’Sullivan received the results of a similar order that had been served on Optimum, which traced activity using New Canaan IP address between October 2020 and April 2021 to Yonkers’s Weed Street home. Google provided subscriber information for the IP address showing that the [pseudonym] account also could be traced to the residence.

“We knocked and announced our presence and were allowed inside by [the homeowner],” it said. “Quinten Yonkers was found inside his bedroom and was brought int other living room area. While explaining the search warrant process and the fact that we were looking for electronic devices/cellular telephones, [the homeowner] asked Lt. Ferraro why (specifically) we had come to her home. Lt. Ferraro told her that we would have to speak with her son but that if he wanted to tell his mother why the police had made contact with him he was free to (and we would still want to speak with him, privately). At this point [the homeowner] asked her son what was ‘going on.’ After much hesitation, mom said ‘just tell me.’ Quinten Yonkers began a spontaneous utterance by saying that he had been ‘trading’ in ‘illegal content’ and ‘illegal videos,’ At one point he said he was under ‘terrible stress’ as to why it had happened and [a woman identified as] his relative who resides in the house asked if the videos involved ‘under aged.’ Yonkers nodded his head in agreement.”

After several minutes, Condos and O’Sullivan asked Yonkers if he would prefer to speak outside “to not have to say private things in front of his mother,” the arrest warrant application said. After Yonkers was read his Miranda warnings and indicated that he understood, “he began by saying that he understood he has a problem and wanted to get help.”

“He was cooperative and corroborated the incident,” O’Sulilvan said in the arrest warrant application. “He began describing the ‘sickness that I have’ in viewing underage child pornography and becoming aroused by it. At one point he ‘acknowledged ‘I know how severe of like a crime this is’ and if he didn’t get help it might ‘land me in jail’ and might ‘end my life.’ Also stated was how we took care to not trade (videos) with ‘underaged kids.’ He said at times [he had] entered chat forums where he inquired as to how to get help for this problem which he likened to a ‘drug’ addiction.”

During the interview, Yonkers also corroborated that he had uploaded a file of child pornography at Elizabethtown College in Pennsylvania and that “some of his early experiences in viewing videos with child pornography were when he was” there, O’Sullivan said in the arrest warrant application.

Police seized his phone. Without prompting, Yonkers identified the pseudonym as a false name and email he had used in connection with the uploaded files.

“He stated he use the [the pseudonym] because it was the name of a kid he hated from high school,” the affidavit said. They used to be friends but had a falling out.”

Yonkers told the investigators that he felt relieved to confess and provided passcodes for his computers.

“He also requested police help in finding therapists who he could talk to about stopping his behavior which he says seems to become worse when he experiences higher stress periods,” the warrant said. “When specifically asked, he claims he has never, at any time, inappropriately touched any child and his problem is limited to watching videos only.”

Darien Police were briefed Aug. 13 on the New Canaan Police investigation, according to the department’s press release.

According to the application, because Yonkers uploaded videos of child pornography, rather than downloaded, the videos, “the act of transmitting child pornography is more consistent with that of a collector or distributor—i.e., one who acquires and trades pornography, or otherwise provides it to others,” the affidavit said.

Police provide explicit descriptions of six videos found on the electronic devices. They range in length of time from one minute 20 seconds to two minutes 42 seconds. The video descriptions say they contain two to four prepubescent white boys, one estimated to be as young as seven years old, and in one case a “clearly adult aged white male wearing glasses” who engage in sexual acts with each other. A video found on Yonkers’s cellphone includes two young boys, one of whom is naked and directing another boy on how to perform sexual acts, and that at about one minute into the video, “a very young girl, approximately 3 or 4 years old, walks into the room and watches the boys.”

Yonkers had been released on $250,000 bond following his Aug. 18 arrest and Aug. 19 court appearance on the New Canaan charges. He’s now being held on $500,000 and is scheduled to appear Oct. 26, Connecticut Judicial Branch records show.

Darien Police said in the press release that their investigation is active.

According to an order signed Aug. 18 by Hudock, Yonkers is forbidden from “loitering near places where minors congregate” as well as being employed anywhere with minors.

According to a May 17 request for conditions of release signed by Assistant State’s Attorney Daniel Cummings, Yonkers was to be subject to home confinement and GPS monitoring, would not use any computer, phone or other digital device without permission and would not have any unsupervised contact or communication with minors, among other conditions.

[Comments are disabled on this article. This pseudonym used by the arrested man has been removed from this article.]