Police on Wednesday arrested a 24-year-old Weed Street man by warrant and charged him with first-degree possession of child pornography and promoting a minor in an obscene performance.

The arrest followed a months-long investigation by the New Canaan Police Investigative Section, which on May 17 received a tip from the Internet Crimes Against Children or “ICAC” data system regarding Internet activity within the town deemed to be child pornography, officials said. 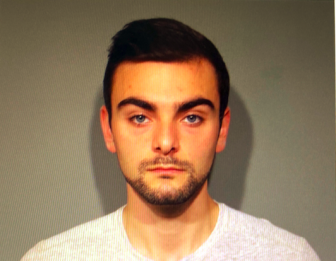 New Canaan Police launched an investigation into possession of child pornography after receiving the email notification and identified Quinten Yonkers as the offender.

The investigators secured multiple search warrants for his Weed Street home. During the search, authorities seized cellphones and computers among other items, and forensically examined the electronics, according to a police report. Evidence collected during the examinations supported the cyber tip and included images and videos of child pornography, the report said.

Police obtained an arrest warrant for the two felony offenses and served it on Yonkers at his Weed Street home at about 11:10 a.m. on Aug. 18.

He is being held on $250,000 bond and is scheduled to appear Thursday in state Superior Court.

The police investigation is still active and no more information will be released at this time, the report said.