The sub-surface work for the new turf fields at New Canaan High School was completed last month and lighting towers and fencing there have been installed, according to the volunteer committee that’s overseeing the widely anticipated projects. 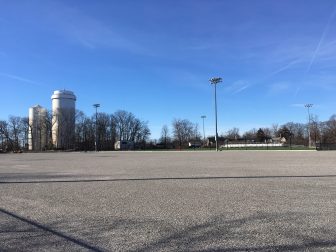 Turf and fill for both fields—a full-size field and a smaller one—will be installed once daytime temperatures consistently reach 45 degrees and that installation will take about three weeks to finish, according to a information supplied by the Town Fields Building Committee.

According to NCHS Athletic Director Jay Egan, an ex officio member of the committee, next week’s warm temperatures are expected to deliver a window for the installation.

“Thanks to the town’s contribution and the private donations, as we kick off the spring season, we are going to have some tremendous fields and a track complex for our athletes to use, and for the youth-level lacrosse and soccer players, and so I think it’s really exciting,” Egan said. “We are on the verge of having a complex that will be second to none as far as this area is concerned.”

Egan noted that losing time due to wet fields in the spring will be a thing of the past with the newly installed turf.

“I think that we are very close to reaping the rewards of everyone, the town’s and private generosity, of the facilities, so I’m excited,” he said. “I think something like this, it’s hard for the community to envision the benefits until they’re there and actually using it.”

All fields will be lighted and landscaping, rebuilding of a walkway around[the new full-size field and building of bleacher platform for the field will be completed in April, he said. 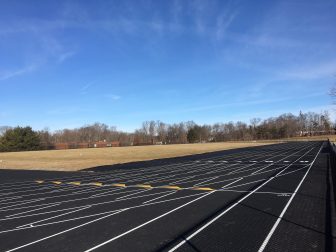 The project, a partnership between the New Canaan Athletic Foundation and town, has three parts: a rebuilt turf field in front of the Waveny water towers, new turf field-and-a-half alongside it and completely redone NCHS track. The project has been estimated to cost $5.8 million, with the town committing $3.9 million in bonding and NCAF contributing privately raised funds to cover the balance.

Turf at the existing field by the water towers was replaced in the fall and is ready for spring sports, according to the committee.

The new track’s surface is complete and ready for practice and competition, according to the committee.

“Final red top coating scheduled to be applied beginning week of June 11th,” according to the group’s update. “Throwing areas require drainage work and pouring of concrete for shot put and discus pads.  That work will be completed once the ground is free of frost and is projected to be done by the last week of March. Still remaining to be finished are the bleacher area and storage shed. These are scheduled to be completed by late spring or early summer.”

One thought on “‘We Are Very Close To Reaping the Rewards’: New Turf Fields, Track at New Canaan High School Near Completion”