Congratulations to Elizabeth Miller, the NewCanaanite.com Athlete of the Week.

The New Canaan girls lacrosse team is having a terrific 2015 season, sitting near the top of the FCIAC with a 9-1 conference record (12-3 overall). A major reason for the Rams’ success has been the play of senior co-captain Elizabeth Miller.

The Boston College-bound Miller has been New Canaan’s most potent all-around weapon, wracking up multiple goals and assists each game as well as controlling draws and causing turnovers for the opposition. 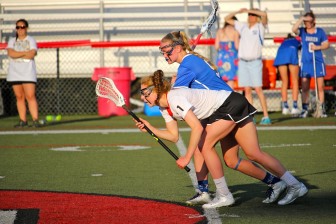 In three games last week—all New Canaan wins—Miller scored eight goals and dished out three assists as the Rams climbed into second place in the FCIAC, just a game behind arch-rival Darien as the regular season winds down. The Blue Wave—who handed New Canaan a 12-9 defeat earlier this season—are the three-time conference champions. Meanwhile the Rams won their only FCIAC title in 1993, something Miller and the Rams will look to change this season.

No. 2 New Canaan will host No. 7 Ridgefield Friday, May 22 at Dunning Field in the quarterfinals of the FCIAC playoffs at 7pm.