The refresh of New Canaan’s last independently owned pharmacy will include a new name as well as new digs when it moves next week within our downtown, owners say. 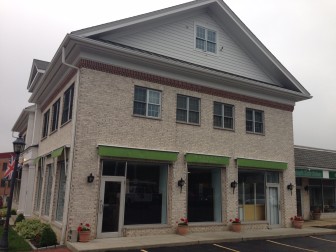 The former Varnum’s Pharmacy is close to moving into this space at 44 East Ave.

Varnum’s, a Main Street fixture and the last of its kind in town since Lang’s on Elm closed two years ago, will become ‘New Canaan Pharmacy’ when it relocates to the northwest corner of Cherry and East Avenue.

A grand opening is planned for July 11, and the pharmacy will hold a special event again as New Canaan picks up when school resumes, owner Ajay Desai said.

“We’re excited about everything that is going on,” Desai said. “We’re the only independently owned pharmacy in town and we want to promote the town of New Canaan [in our name]. It’s everyone’s community pharmacy. We are really excited to expand our amenities in a brighter, updated space.” 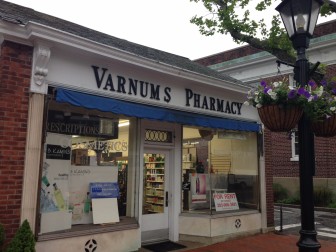 Varnum’s Pharmacy is slated to move down the hill to where East Avenue meets Cherry Street, on July 11, 2014. Credit: Terry Dinan

New Canaan Pharmacy will continue to operate as a full-service pharmacy in the new 1,200-square-foot space, which is about the same size as it’s current location, Desai said.

“It’s going to be a newer space, with brand-new shelves and a newer feel than our current location.”

Meanwhile, it isn’t clear just what will move into 91 Main St. The 1940 building’s owners have said they feel the space is not appropriate for a restaurant and do not want a direct competitor to one of their other, current tenants on the block—currently those include Baskin-Robbins, The Toy Chest, Candy Nichols, Garelick & Herbs, People’s Bank and Handwright Gallery & Framing.