Saying that more information is needed about a new two-family house planned for Forest Street, town officials on Monday voted unanimously to impose a 90-day delay in the demolition of an existing antique structure on the .3-acre lot. 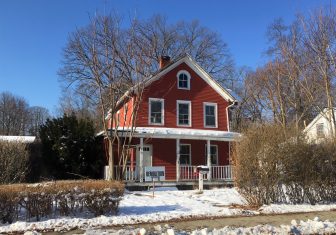 Members of the Historical Review Committee during a special meeting described the architecture of the approximately 1830-built home at 74 Forest St. as a “vernacular” type that rapidly is disappearing in a historically important area.

Committee member Martin Skrelunas, an architecture and landscape preservationist, said the red-painted house “represents and is one of last of this style in New Canaan.”

Addressing Tom Sturges, the contractor on the construction project, Skrelunas said, “I think the thing that could be special about your project is, knowing you’re building from scratch, is that you can demonstrate that you can build in a non-designated historic street but maintain that history, maintain that spirit, which in turn could benefit the rest of that block.”

“I think there will be change on the rest [of the street] and if you are able to do that, I could see others following suit and becoming a much more valuable area,” Skrelunas said at the meeting, held in the Janet Lindstrom Room at the New Canaan Historical Society’s Town House.

Committee member Rose Scott Long, an architectural preservationist, added: “This is kind of a crucial point because there is definitely going to be more development in that area and what you do here it is really going to have a great impact.”

Mimi Findlay, a preservationist who had filed the formal objection to demolition that prompted the hearing, was in attendance.

Though he had no formal schematics to show—a building permit application for a new home has not yet been filed with the town—Sturges said he intended to create a farmhouse with a porch “similar to what is there now.”

The new structure would not increase density or require a variance to the New Canaan Zoning Regulations, he said.

“I do want to build something that is attractive to the street and keep in mind with the history as well,” Sturges said.

Citing a New Canaan ordinance regarding the committee’s work, Long noted that the existing structure “embodies characteristics of a type, period or method of construction that is rare or rapidly disappearing and worthy of preservation.”

According to Findlay’s research, which includes citations from a survey, the original section of the home was “built by Woolsey Burtis before 1836, but it was extensively remodeled by his grandson, James Burtis, partner in the retail grocery concern Burtis and Mead.”

Its significance is “in the remaining architectural features, and with its neighbor to the north, they represent the original residential houses on Forest Street, of which several remain,” according to Findlay’s objection letter. “The street was the original road leading from the little village of New Canaan to the main road toward the northeast and to Wilton.”

Findlay participated actively in the hearing, urging the committee to use the 90-day delay as a negotiation tool with Sturges in order to come to a mutually agreeable plan for the property.

Findlay said there’s “no evidence of post and beam construction” for the existing house, so that it could be “gutted to the walls and emptied out entirely,” keeping what remains as a shell “and redoing all the exterior with siding and so on.”

Farrell responded that “all of these things are possible with unlimited resources and no consideration of the cost.”

Long asked Sturges why the house needs to be razed at all, since he’s planning to build a two-family house there in any case?

Sturges answered: “Just because of the structure and the foundation and to try and restore it and make it structurally sound and just for the whole interior design and what not, with a stone foundation that is there and a lot of the floor joists are not large enough and it is just better to take down than rebuild.”

Findlay asked: “Better for whom?”

Sturges responded: “Better for me. But I think just overall it is structurally deficient.”

Committee members asked Sturges whether the new two-family home that he had in mind would be one single structure (yes), what he had planned for ceiling heights (about nine feet on the first floor, eight on the second) and how quickly he could get a schematic to them (about one week).

The house and property have been cited for blight in the recent past.

Skrelunas said he was eager to see a rendering of what Sturges is planning and that with a schematic in hand, it’s likely the 90-day delay of demolition could be shortened. He also encouraged Sturges to view some of the restoration and essentially new construction work that’s materialized along Main Street in recent years.

“I agreed to join this [committee] with the understanding that really the demolition delay can be positive for both the developer and the town and the [Plan of Conservation & Development] by allowing friendly conversations for a few weeks or so, before demolition takes place,” he said.

A 90-day delay of demolition from the time of the committee’s decision would bring the date to about March 11.