Saying a Luke’s Wood Road property is unusual in that it abuts water company-owned land used by roving deer hunters and is restricted by wetlands, with a house that sits midway through an S-curve that attracts motorists who tend to pull over there and linger, the property’s owner is seeking approval for pillars and a gate whose height exceed what normally is allowed.

The pillars and gate out front of 309 Lukes Wood Road. Credit: Michael Dinan

The area of 309 Lukes Wood Road, which backs up to the Grace Community Church property, is typical of a 4-acre zone in New Canaan in that it is set in a wooded neighborhood where gates and pillars are common, local attorney David Rucci of Lampert Toohey & Rucci, LLC told the Planning & Zoning Commission at its regular meeting on Tuesday.

Yet the road also is a very busy as a cut-through between Routes 123 and 124, and homeowners Aris and Patricia Kekedjian “have had issues with cars parking on the front of their property,” Rucci said, speaking on their behalf. 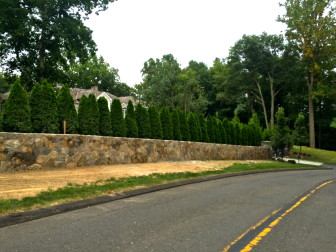 Approaching the driveway of 309 Lukes Wood Road in New Canaan. A deer fence that had been installed by the stone wall here has since been removed. Credit: Michael Dinan

“They have had issues with people lunching, and it just happens to be a place where you sort of pull off [of the road], and there is safety concern as well, with trying to get in and out of this driveway, at certain times,” Rucci told P&Z during a public hearing, held in the Sturgess Room at New Canaan Nature Center.

Ultimately, and at the urging of P&Z Chairman John Goodwin, the commission decided to put off a formal vote on a special permit application for the proposed pillars and gate until the members of the group had a chance to view them in person. The pillars—which stand about six and seven feet above grade, given the slope of the land, against the four feet allowed by the New Canaan Zoning Regulations (see Section 6.5.C.3.a on page 126 here)—already are in place. The pillars had stood at the end of the driveway when a prior owner lived at 309 Lukes Wood Road, before the driveway itself was reconfigured and the pillars relocated. 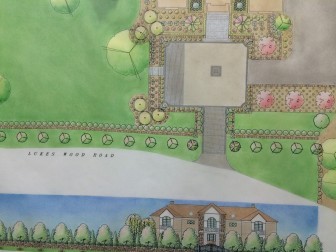 The original plan for a stone wall out front of 309 Lukes Wood Road looked like this, and it was discovered that a portion of it encroached on property owned by Aquarion.

Goodwin said that although it’s possible to look around New Canaan and snap photos of high gates (which the applicant did), that in the area immediately around 309 Lukes Wood Road “there is actually, in my opinion, a very nice sense of openness.”

“And when I go by the applicant’s property, you just don’t get as open a feel,” Goodwin said. “There was deer fence, so it’s good to hear that is going away, but even some of the landscaping, and then you’ve got a big gate—and the applicant certainly can do whatever they want in terms of landscaping so I’m not saying they cannot landscape—but I just don’t want to see that street built up into one large, screened-in house after another.”

A new site plan for 309 Lukes Wood Road has the stone wall jog at two right angles so that it goes around water company property.

The question of the gates and pillars is the latest matter to come before town officials in connection with 309 Lukes Wood Road—a property that gained attention last fall when, after more than one year, the owners purchased a strip of land from the town in order to extend the stone wall that runs nearly along their western property line.

The Kekedjians would install a deer fence along the same line—for a time seeking an after-the-fact special permit, because that deer fence was located in a non-wooded section of their front yard—but later took it down when they discovered that the arborvitae trees needed to screen it would have been planted on town-owned property.

The homeowners also found that they had extended their front stone wall onto property owned by the water company. An April 28 letter from South Norwalk Electric and Water, sent to Goodwin and Town Planner Steve Kleppin after the Kekedjians first made their application regarding the fencing and related changes, said in part: “These alterations occurred not only on the Kekedjians’ own property but also on town-owned and on SNEW-owned properties. Since completion of the project, the Kekedjians have acquired from the town of New Canaan a strip of land impacted by their re-development activities along a portion of Lukes Wood Road. For the record, SNEW has never given its consent to any development of its property, and is not a party to this application. Furthermore, SNEW strenuously objects to this premeditated and private use of its property beyond any encumbrances which have been legally conveyed and properly filed by the Town Clerk on Land Record.”

Rucci said during the July 28 public hearing that the stone wall is to be re-configured in such a way that it does not touch SNEW property.

“Our position with them is that we are taking everything down, we are bringing it back to the original grade it was before, we are not keeping anything on their property whatsoever, and we are not going to encroach on their property in any way, shape or form,” he said.

Regarding the gate and pillars, P&Z commissioners asked whether plans called for a lantern to be placed on top of the gate posts (yes, about 8 inches high), whether there’s already ground lighting at the gates (yes) and whether the stone wall would remain at four feet or less, as required under the regulations (yes).

Rucci said that approval of the pillars and gate for the property at 309 Lukes Wood Road would not set precedent for other properties because it faces specific challenges, and that he would be OK if a condition of approval for them involved ensuring that the stone wall not encroach on water company property. He added that the family has found shell casings on its property (a deer fence has been installed around back of the home) and noted that the language in New Canaan’s zoning regulations addresses “fencing” and “walls” specifically but not gates.

P&Z Commissioner John Kriz echoed Goodwin’s concerns, calling the pillars and stone wall both “substantial” and saying that, taken together and with the landscaping in place, there is “a loom factor.”

Several commissioners asked whether the Kekedjians would consider capping the pillars so that there’s no decorative lantern placed atop either one, further raising their height.

Commissioner Bill Redman said: “We have two gates at six or seven feet. I am just concerned about going up any more than that. It seems to me that one that that could be done is to eliminate the lights.”

Commissioner Claire Tiscornia said that the applicants have “shown good faith” by building and removing a wall and fence and also taking the unusual step of purchasing a piece of property from the town.

“I think they are trying to do everything they can do,” she said.

P&Z is scheduled to meet Aug. 25 (the week that school starts).