Phyllis Weinstein did not purposely name her 10-week-old golden retriever ‘Tahoe’ because the puppy reminds her of a well-loved, recently deceased dog that for years greeted customers at the family’s iconic New Canaan shop, Mackenzie’s on South Avenue. 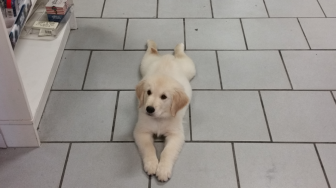 Yet the name ‘Tahoe’ is similar to ‘Tango’—who died April 16 at age seven, days after an unexpected diagnosis of an aggressive cancer—and Weinstein said she’s pleased with the similarity.

In fact, Weinstein said on a recent afternoon, the similarities already seem to go well beyond their names. 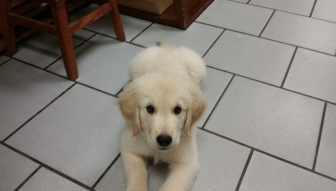 “The interesting thing is that my dog Tango used to love to pick up a huge stick and carry it through the Mianus River Park [in Stamford], nobody could believe it,” she recalled. “So now we have this puppy just three days in the backyard, and he was turned away from me doing something, and when he turned back he has this huge branch and he’s walking through the yard. It was like a pang in my heart. A miniature Tango, you know?”

That miniature Tango is now greeting the kids and other customers who frequent Mackenzie’s and “everybody loves him,” Weinstein said. 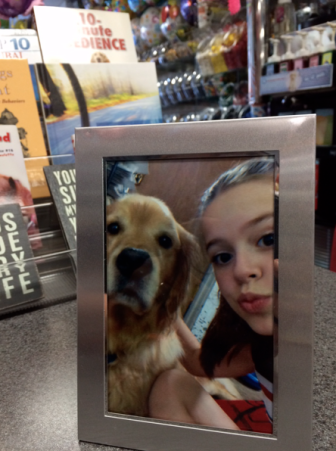 This photo of Tango and Grace lives behind the counter at Mackenzie’s. The selfie was taken nine months ago and Tango, a 7-year-old golden retriever, passed suddenly and unexpectedly last month. Credit: Michael Dinan

“There were two or three groups of kids in the other day and they were playing nonstop so of course Tahoe was exhausted, which is great,” she said.

The store’s new unofficial and beloved greeter—his predecessor in the role, Tango, was so well-liked that Weinstein’s family set up a makeshift memorial to him in the shop so that customers knew he had passed, and there’s a framed photo behind the counter of Tango with one girl who frequents Mackenzie’s and loved the dog—Tahoe is showing early signs of being “very gentle, very calm and just a really sweet personality,” Weinstein said.

Over time, having a friendly pup in the shop for customers who like dogs has become strongly identified with Mackenzie’s. Tahoe is so young right now that he’s not allowed to walk loosely throughout Mackenzie’s, though there already have been days when kids come in and play nonstop with the puppy for a half-hour. 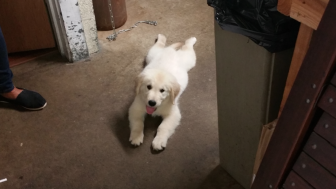 “Who doesn’t like a golden retriever puppy?” Weinstein said.

Tahoe, who comes from a breeder up in Sherman, goes to Darien Animal Hospital and eats Core-brand grain-free kibble, Weinstein said.