From the start, the antique barn out back drew the Larsons to the 2-acre Ponus Ridge property and Colonial home they moved into 18 months ago. 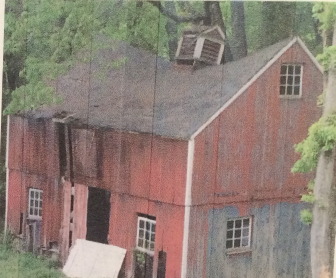 In plain view at the bottom of a hill that runs toward the rear property line, the red, cupola-topped ca. 1910 structure not only graced the tree-lined view but also had potential for practical use for the active family which includes three boys and is headed by a Midwest native dad who grew up on a sheep ranch and mom from Dallas.

When last winter’s snowfall took a massive toll on the structurally deteriorating barn—the roof began to sag, on the verge of collapse—the Larsons conceived of one way they might pull together the wood to restore it, namely, by seeing whether any of the dead or dying trees already surrounding their new home could be used. 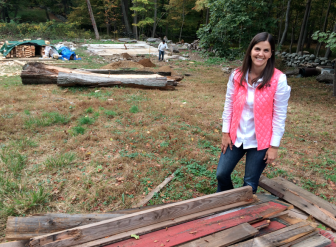 Kristina Larson stands near five piles of salvaged original wood from the ca. 1910 barn her family is restoring on their Ponus Ridge property. Credit: Michael Dinan

“It’s been fascinating for all of us and exciting for all of us,” Kristina Larson said on a recent afternoon as she stood about halfway down the hill, near five piles of wood that had been salvaged from the carefully dismantled barn. (The Larsons’ 2-year-old English Springer spaniel, Dukes, could be heard barking up top, above the din of a saw-milling apparatus.)

“It’s just very serendipitous because I grew up in a waste-not, want-not environment, and the idea of cutting down a tree and throwing it away just doesn’t sit right with me. So every bit of this makes me feel like it’s the right thing to do.” 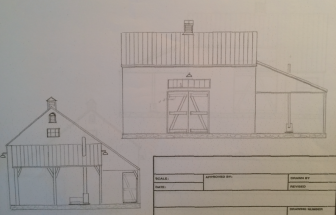 Renderings of the planned, restored barn of the Larsons of Ponus Ridge.

What they’re doing is a barn restoration project that not only speaks to New Canaan’s preservation sensibility but which also, in its steady allegiance to that “waste not, want not” philosophy, has reaped (or in some cases, soon will) rewards for Kristina herself, the boys, neighborhood and even public schools.

The house sits directly across Ponus from West School and with what Kristina calls “pretty much a full-blown lumberyard” out front, has piqued the curiosity of passersby, particularly as several of the dead or dying trees out front have come down. 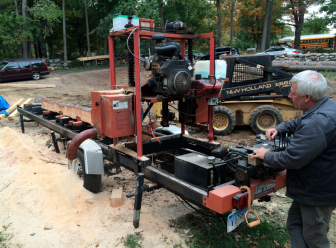 The original plan with a hemlock and ash trees out front had been to find four 22-foot pieces that would make up the Tie-beams of the restored barn—itself pulled apart piece-by-piece, and studied for rebuilding purposes, all under the eyes of master timber framer Reynard Thompson of Colebrook-based Bring Back Barns.

As the Larsons looked at what trees needed to come down in front, including some ash—and then the massive oak down by the barn itself (which had become so overgrown that it contributed to the barn’s demise)—they realized that there could be enough salvageable hard lumber on their property to bring in a professional for milling in order to create something even sturdier and more beautiful than if they’d simply bought standard pine. 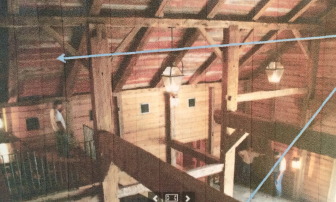 A photo of a barn interior that the Larsons used to show New Canaan zoning officials how they plan to resurface the siding. Contributed photo

What’s happened over the past several weeks since the Larsons committed to the project—in July they received swift, enthusiastic and unanimous approval for a variance from the Zoning Board of Appeals (and neighbors) because the barn is close to a side property line—is that the property itself has been converted into a kind of self-sustaining workshop for the barn-to-be (and they’re building a maple sugar shed right next to it).

As the builder pulled apart the barn and decided just what lumber was needed to rebuild its interior (the inside will be different from the original, as things like horse stalls are no longer needed), a “cut list” developed. With that in hand, the builder looked to dead and dying trees on the property that were straight enough, in the case of longer pieces, and could yield, with the help of sawmilling, the needed pieces. 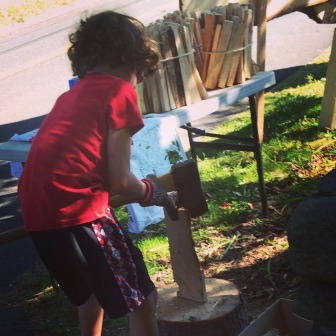 The youngest Larson brother chops kindling and sells it at a makeshift roadside stand opposite West School. Contributed photo

The original, concrete foundation of the barn is in place—its footprint is about 31-by-22-feet.

“[From] the oak, we were hoping to get some of the longer timbers for the 31-foot pieces, and possibly a Tie-beam out of it, and then the other Tie-beams out of [the trees in] the front,” she said, kneeling before a tarp-draped stack of milled lumber with pencil marks bearing numerical figures and words like ‘joist,’ ‘post’ and ‘beam.’ “And so that was the original scope of what we were going to try and provide in terms of lumber.”

As the project went along—asked about the timeline, Kristina said, “It kind of has its own timeline”—unusable pieces of wood, such as end pieces or those too small for any of what was needed for the barn or shed—quickly formed their own piles. 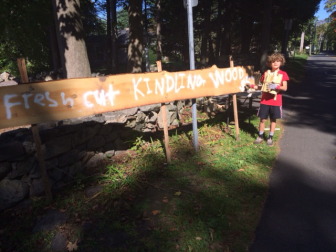 The kindling stand, its sign also re-used lumber from the project. Contributed photo

And not a single scrap of it is going to waste.

Some of it has been stacked for the Larsons’ own firewood, some of them have been tagged for the incinerator of a friend’s home heating system, some planks will be used by the New Canaan Land Trust for creating new footpaths, some of it is being chopped into kindling and sold at a makeshift roadside stand (also made from the wood) by the Larsons’ youngest.

Some of it is being used by New Canaan High School woodworking teacher Ashley O’Connor—saving some funds from a budget that would have been spent on wood in order to save for equipment such as a lathe. 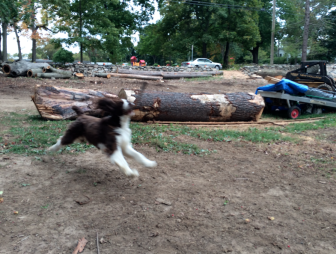 Much of the wood that O’Connor is salvaging from the Larsons’ scrap pile will be used by what the 5-year New Canaan Public Schools teacher calls a “scrap wood sculpture” which is really just a way for the new students in her semester-long intro class to learn how to use woodworking tools.

Standing by a pickup truck during a collection run on a recent afternoon, O’Connor said the help from Larson has been hugely helpful and is typical of her experience of residents here in town. 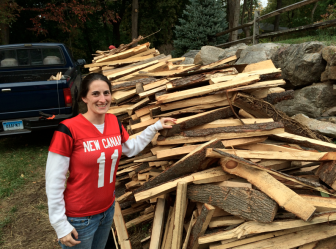 NCHS woodworking teacher Ashley O’Connor at the Larsons, picking out pieces for her students to use. Credit: Michael Dinan

“The New Canaan community is amazing,” O’Connor said. “They are so great, so helpful. I have done things with the Historical Society, where members of the community have reached out and donated things to me for our classes—tools and materials, mostly tools, just saying, ‘Would you be able to use this?’ It’s wonderful.”

And it’s been wonderful for the Larson kids, too, Kristina said, as they’ve been on hand for every step of the restoration project and picked up important lessons. In addition to the maple sugar shed to be installed alongside the restored barn, the family plans to set up its beekeeping operation at the bottom of the hill, too. 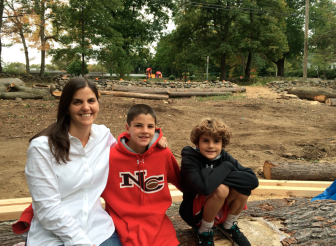 Kristina says her three sons (Gus and Will here) are all enjoying the barn restoration project going on at their home, opposite West School. Credit: Michael Dinan

One of the neighbors who has been a vocal supporter of the project—which includes replanting trees on the property including along Ponus Ridge—is Marjorie Conrad. According to the July 7 ZBA meeting, she spoke in favor of it as the granddaughter of the original property owner when that area was a larger parcel (subdivided in the 1970s).

Kristina said that Conrad has shared memories of sledding down the hill there and gathering for hot chocolate afterwards—traditions for neighborhood kids that may well be restored along with the barn itself.

Active members of their faith community in New Canaan for several years, the Larsons moved here from neighboring Wilton, where they also had an antique barn on the property that developed into a sort of impromptu venue for a Christmas party that included a nativity scene, and that’s something that Kristina said she may want to bring to the family’s new Ponus Ridge home, too, “just as a warm way to get to know our new neighbors and be part of the community.”