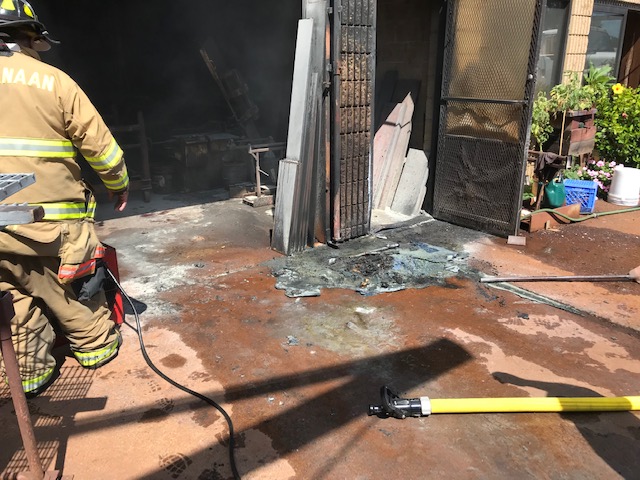 The aftermath of a fire at 26 Burtis Ave. in New Canaan on Sept. 3, 2019. Photo published with permission from its owner

Firefighters on Tuesday afternoon put out a blaze at a downtown business that injured one person, officials said.

At about 1:07 p.m., members of the New Canaan Fire Department responded to the reported structure fire with possible entrapment at 26 Burtis Ave., according to a press release issued by Fire Marshal Fred Baker.

There, arriving units found a small fire in a trash container outside the building that had been partially extinguished by the New Canaan Police Department, Baker said. The cause of the fire appears to have been accidental, he said.

“Firefighters entered the structure and found one person that had been injured and brought him outside where he was treated by New Canaan Volunteer Ambulance members,” Baker said in the release. “He was transported to Norwalk Hospital with non-life-threatening injuries.”

The 1984-built concrete and cinder-exterior building at 26 Burtis Ave. is home to New Canaan Forge, according to the longstanding business’s Facebook page.

According to Baker, firefighters completed a wet down of the fire area and evacuated smoke from the building, Baker said.