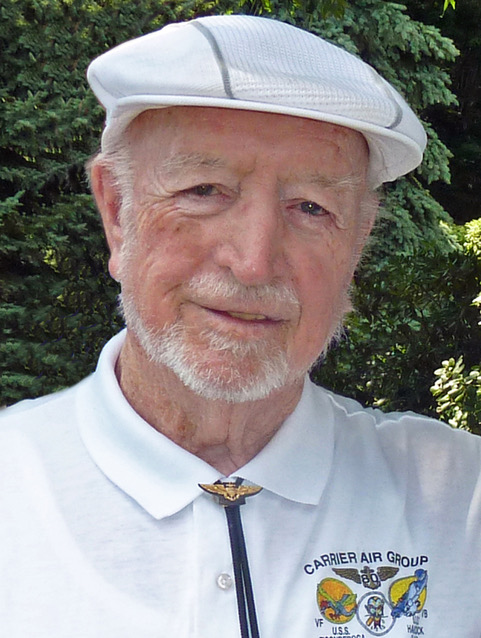 George J. Walsh, who was among the last surviving U.S. Navy dive bomber pilots from World War II and an advertising executive during Madison Avenue’s go-go years in the ‘60s and ‘70s, died peacefully at home on Sept. 26. He was 98. 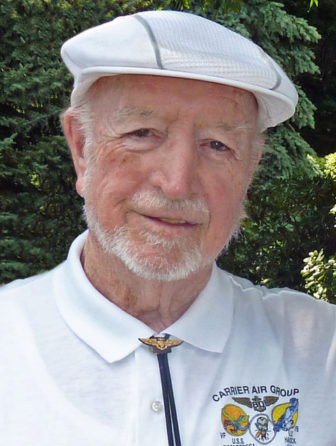 Born in Brooklyn, New York on April 18, 1921, he was the son of George J. Walsh, a contractor and dock builder. His mother was the former Lillian O’Brien.

He married Anne Morrell, also of Brooklyn, in 1948 and was a resident of Garden City, New York for 32 years, raising their family before moving to Darien. Mrs. Walsh died in 2007.

He grew up during the Great Depression and enlisted in the Navy to begin training as an aviator just as the Japanese attacked Pearl Harbor.

Initially flying anti-submarine missions against German U-boats on the East Coast, Mr. Walsh was transferred to training as a dive bomber pilot when the nation ramped up construction of aircraft carriers to combat the Japanese in the Pacific.

He was assigned to the USS Ticonderoga and flew an SB2C Helldiver in action for the first time in late 1944 to support landings in the Philippines. He also saw action against Japanese shipping and airfields in the South China Sea, what was then French Indochina and Formosa.

It was off Formosa on Jan. 21, 1945 that then Lt. Cmdr. Walsh survived an anti-aircraft hit on his plane, a crash landing on the Ticonderoga, and two Japanese suicide planes crashing into the ship — which for a time trapped him and squadron mates below deck until they could escape the smoke and flames.

Lt. Cmdr. Walsh transferred with the surviving members of his air group to the USS Hancock. He flew raids during the invasion of Iwo Jima and hit Okinawa before joining the first carrier-based aircraft attacks on the Japanese mainland.

Among the decorations he received were the Distinguished Flying Cross for his role in sinking a Japanese cruiser in Manila Bay and the Air Medal for an attack on a group of Japanese transport ships.

After the war Mr. Walsh completed his education under the GI Bill at Brooklyn College and went to work as an advertising agent in Manhattan.

In 1956 he began his own firm, George J. Walsh & Co., and built a diverse business promoting products like Barbasol shaving cream along with schools, colleges and summer camps. The company specialized in travel and tourism in the Caribbean and Mexico, with major accounts that included Gulf+Western’s hotel interests in the Dominican Republic and the Princess International Hotel line.

After selling his firm in the 1980s, Mr. Walsh was certified as an investment advisor and managed the portfolios of a small group of clients.

But it was the pivotal Pacific Battle of Midway that absorbed much of Mr. Walsh’s retirement years. He believed that the dive bombers who turned the tide of that battle by sinking four Japanese aircraft carriers in June 1942 had not been given their due.

He believed historical and popular culture accounts, including the 1976 movie Midway, focused on the futile sacrifice of torpedo bomber crews and ignored the timidity and other shortcomings of the U.S. fleet’s commanders. In particular he sought a fuller appreciation of the role USS Enterprise dive bomber Commander C. Wade McClusky played in the destruction of the Japanese carriers.

After years of campaigning and writing a book, The Battle of Midway: Searching for the Truth, Mr. Walsh at the age of 96 attended the dedication of a memorial to McClusky in Buffalo, his home town.

Mr. Walsh is survived by a son, George M. Walsh of Saratoga Springs, New York, and three daughters, Alice Shapiro of Doylestown, Pennsylvania; Anne Ross of Darien; and Regina Walsh of New Canaan. He is also survived by seven grandchildren.

The family will receive friends on Wednesday, October 2, 2019 from 4 p.m. to 8 p.m., at the Lawrence Funeral Home, 2119 Boston Post Road, Darien. Private services will be held on Thursday.

In lieu of flowers, memorial contributions may be made to KEYS (Kids Empowered by Your Support).

Author Russell Banks to Speak on His Latest Book, ‘Foregone’

Special Education Webinar: How to Prepare for the Annual Review PPT Meeting