Open space advocates are eagerly anticipating the sale of a Weed Street property that could lead, if all goes well, to the creation of a pedestrian path connecting Irwin Park to the New Canaan Nature Center.

If things pan out as they hope, New Canaan could see a “greenway” from the woods out back of the Nature Center, through New Canaan Land Trust property and all the way to Weed Street and Irwin Park (which itself may eventually connect via sidewalk to the top of Elm)—in other words, a walk-able loop encompassing the heart of downtown New Canaan and all those town treasures along the way. 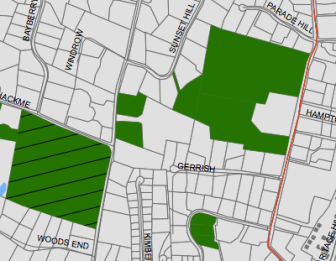 Detail of the “Classified Open Space” map from the South Western Regional Planning Agency (http://bit.ly/1nQG3dO). The striped property on the left is Irwin. Catty-corner are two pieces of open space, the northern one of which is just about 425 feet from the corner of the shoehorn-shaped property, which is comprised of both New Canaan Land Trust and New Canaan Nature Center property. If connected, a person could safely and legally walk from downtown New Canaan, up past God’s Acre, along Oenoke to the Nature Center and then through the woods to Weed and Irwin. Credit: SWRPA

All that’s needed is the transfer to the town of a strategically placed 425-foot strip of land that’s about 15 to 30 feet wide (see map detail at right), according to New Canaan Land Trust Board of Trustees President Chris Schipper.

Right now, that strip is part of a property at Weed Street near the intersection of Wahackme that has been on the market for a little over one year.

Asked about the status of the property, listing agent Susan Blabey of William Pitt Sotheby’s International Realty confirmed that there’s an accepted offer and declined to say more, citing the owner’s privacy and the fact that the deal is not yet done.

If the sale does go through, here’s an outline of one way the greenway would come to fruition:

The president of the Nature Center’s board of directors, Skip Hobbs, said he has “great interest in meeting with the purchaser.” 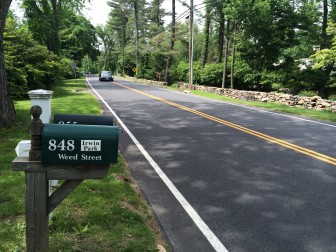 Looking north from the Weed Street entrance to Irwin Park on June 4, 2014. If all goes as open space advocates hope, a person could walk up Weed in this direction and find his or her way through the woods to the Nature Center and Oenoke Ridge Road. Credit: Michael Dinan

“If the purchaser is a developer that was to subdivide it, I think it could be a win-win for everybody, if we could come up with a nice plan of development that provides a strip of land that would enable us to create a walking pathway between the Nature Center and Irwin Park,” Hobbs told NewCanaanite.com. “This fits in with the long-term Plan of Conservation [and Development] and the vision that a number of us have had for many years, of creating these green links.”

Hobbs added that it would behoove the prospective new owner to make that very set-aside part of an initial site plan to subdivide—not only because it likely would accelerate the approval process, he said, but also because the land would represent far less than the 10 percent the town is entitled to under its zoning regulations.

The relevant rule can be found under “Article 3: Parcel and Lot Requirements” of New Canaan’s Subdivision Regulations, section 3.04 “Open Space.”

Asked about the provision generally, unconnected to this particular piece of land, Town Planner Steve Kleppin told NewCanaanite.com that P&Z also is empowered to waive the requirement.

Schipper said if the set-aside was granted, “it would then make it possible for the town, in concert with the Nature Center and Land Trust, to build a small elevated walkway—because there are wetlands there—across the wetlands and onto firmer ground, and that would allow people to walk from Irwin Park across to the Nature Center.”

“The Land Trust would see value in allowing that in its role, because the land trust now is the successor organization of the New Canaan Bridle Path Association, Green Links Association and New Canaan Audubon Society, so walkways and links are part of our mission now,” Schipper said.

The prospect of the greenway is only possible because of generous donations of private land by property owners in that area, starting about 40 years ago, Schipper said. One included five acres of total property, broken across two separate lots, in 1974. Another two acres came in that same year, in a piece of property that adjoins the Nature Center, he said. Finally, in 1977, another one acre in that area was donated by a private property owner, Schipper said.

Efforts to create such greenways go back many years, including to an organization created and led by town resident Dick Bergmann, Hobbs said. Efforts in more recent years to purchase the strip of land were unsuccessful, in part because of dim fundraising prospects amid competing capital projects in New Canaan, Hobbs said.

Hobbs noted that it’s critical, if the greenway vision is to be realized, that Planning & Zoning Commission and the purchaser reach an agreement. Given the size of the lot, Hobbs estimated that three or four houses could be built on subdivided property.

“We cannot force an agreement, but I would hope that the purchaser is conservation-minded,” Hobbs said. “And frankly, if I was the owner of one of the houses, I would think it’s a benefit to buying a house there that I would have immediate access to a wonderful walking trail around town.”