A black Mercedes SUV with New York plates that was parked in the northwest corner of the Starbucks lot (closest to the corner), rolled across Park Street, crossing two pedestrian sidewalks, flattening a street sign and coming to stop at the poster wall by the train station Saturday morning. 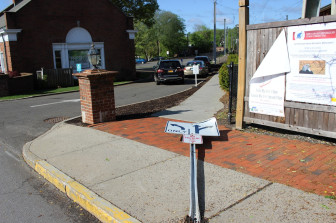 No one appeared to have been hurt and no other motor vehicles damaged in the incident, which occurred at approximately 8:30 a.m., according to eyewitnesses.

A woman on scene who was asked about it (as she emerged from Starbucks with her coffee and credit card, which she told NewCanaanite.com she had to go back inside to retrieve) said the SUV was hers and she intended to notify police. (Update 2:30 p.m.—New Canaan Police Sgt. Carol Ogrinc said a report of the incident did come in, logged at 8:33 a.m.) The motorist declined to give her name to NewCanaanite.com, saying only that she thought the SUV was in park and that new cars have computers. 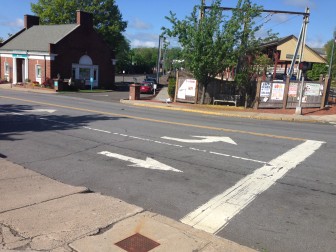 Here’s where the SUV started from. It crossed two sidewalks on its way to the poster wall by the train station. It’s a miracle no one was hurt, though it was a Saturday morning. Credit: Terry Dinan

A “No Parking at Any Time” sign lay flattened across the sidewalk between First County Bank and the train station’s corner at Park and Elm Streets—which at certain times of the day ranks among the busiest stretches of sidewalk in New Canaan, with rail commuters hustling to and fro.

Two months ago, a woman walking across Park Street against the light there was struck by a passing vehicle, breaking her leg.