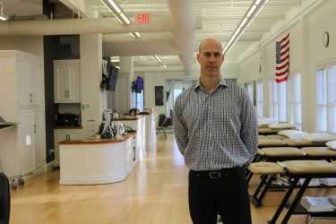 A Buffalo, N.Y. native who earned a bachelor’s degree in physical therapy from Ithaca College in 1993, Wilkowski had already spent several years working in Cincinnati, a hub of orthopedics and sports medicine at the time.

He founded Performance after purchasing the physical therapy practice from the Manhattan startup, and expanded to Greenwich in 2005.

“We have seen a lot of New Canaan residents through the years, it’s a great community, and we decided it was a good time to explore the New Canaan market and see if it would work out to have a facility right in town, instead of asking people to travel to come to us,” Wilkowski said on a recent afternoon.

“I probably would have been here sooner, but we aren’t just opening all over the place—we want to make sure we have a great staff to put in these facilities,” said Wilkowski, a Greenwich resident. “We are here now, and we are excited to be here. We get pretty entrenched in the communities where we’re based.”

In fact, Performance trainers have been serving a broad base of New Canaan clients for years. With locations in Stamford, Greenwich, Darien and Westport, they’ve worked with New Canaan Youth Football teams, for example, and also bolstered the strength and conditioning program of New Canaan High School athletic trainers.

Clients include not just young athletes presenting problems such as overuse or traumatic injuries from sports, but also 20- to 40-year-old “weekend warriors” who injure themselves trying to stay in shape and overdo it, and seniors, Wilkowski said. Services include PT and training as well as sports medicine, massage, pilates, cryotherapy and nutrition.

Performance will be located at 16 Cross St. and has already joined the New Canaan Chamber of Commerce.

The Chamber’s Laura Budd said the organization is “looking forward to having this new state-of-the-art physical therapy and fitness center in downtown New Canaan.”

“We have been working closely with the team at PPT as they prepare for their grand opening celebration on April 25th,” she said. (Scheduled tor 6 to 8 p.m. that Thursday and open to all, the grand opening will include a ribbon-cutting with First Selectman Kevin Moynihan, and food and wine will be served.)

Residents are familiar with the new mixed-use building, an anchor of the reimagined Cross-Vitti corridor that in 2014 was considered a contender to house the local post office, and last year featured an eco-friendly cleaners. Performance is moving into the entire street-facing commercial space. The 2,200-square-foot area will include an exercise studio and two treatment rooms, according to a building permit application filed in January.

Asked about his own keys to success, Wilkowski said “sweating the details” has been important.

Performance has developed its own set of “core values” and that’s one of them, printed on the business’s walls and T-shirts, he said.

“That speaks to our staff’s lives on a daily basis inside of Performance—no detail is too small,” Wilkowski said. “We’re very system-oriented, yet we’re also a people business, so the people we hire have to be really good at connecting with other people. We hire professionals who are on a track to continue to grow in their careers. This is not a place they will come and get stale. They’ll keep challenging themselves to get better, and healthcare itself is changing, so we change with that. Another one of our core values is, ‘We are teachers and scholars.’ We challenge ourselves to be better and to teach our clients, mentoring them and constantly giving back to the profession.”