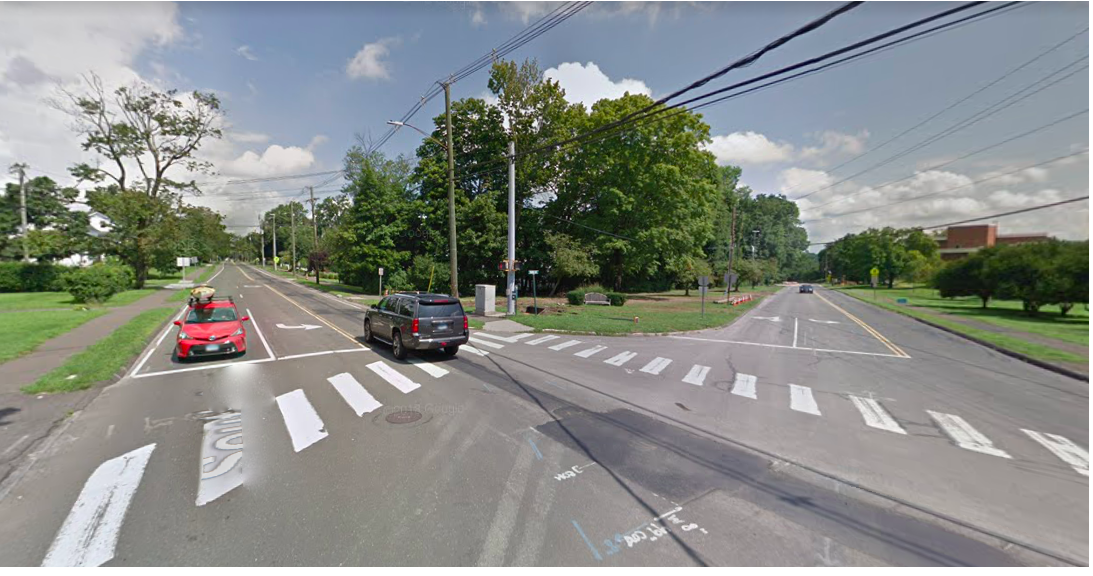 Farm Road and South Avenue in New Canaan. Town officials decided recently to keep the 'No Turn on Red' signs there, even though many drivers ignore the instruction. Streetview

Saying it makes the busy intersection of Farm Road and South Avenue safer, officials determined recently to preserve the ‘No Turn on Red’ signs there.

Prompted by a New Canaan High School student who observed that about 40 percent of motorists before and after school turned right anyway at the stop lights at Farm and South, Public Works Director Tiger Mann had asked state transportation officials to study the intersection to see whether it might make sense to remove the signs.

Ultimately, the Connecticut Department of Transportation (South Avenue is a state road, Route 124) recommended keeping the signs, as more than 3,000 total vehicles move through the intersection daily at peak times, and more than 75 pedestrians and cyclists, mostly school-aged, walk across some part of the intersection on weekdays.

“It was noted that there were more pedestrians crossing the intersection that did not make use of the pedestrian signals, particularly during the afternoon peak hour,” DOT Transportation Engineer Catherine Watras told the town in an email summary of the state’s findings. “These are the peak hours for vehicles, and the turning movement counts indicate even more pedestrians during the peak times for school aged pedestrians due to the elementary, middle, and high schools in the immediate vicinity with requirements for all students residing within certain distances to walk. The intersection falls within those distances for all age groups. Even though the Town authorities have indicated that a policeman is posted at the intersection during the morning and afternoon peak school pedestrian hours, the staggered times for school start and end times already span 45 minutes, resulting in less coverage for either the high school students that begin the school day earlier or the later younger elementary school students.”

Though a three-year crash history of the intersection shows no crashes involved right turns, that’s with the ‘No Turn on Red’ signs already in place (which they have been since 1978), Wattras said.

“In 2007, there was a complaint from a pedestrian about the pedestrian phasing, including mention of impatient drivers, a tendency for high school drivers to disobey the ‘No Turn on Red’ signing after school is released in the afternoon, and the lack of police enforcement,” she said. As a result, the state extended the time given to pedestrians to cross the intersection to 28 seconds.

Mann said during the most recent meeting of the Traffic Calming Work Group that though the idea behind removing the signs may have been to alleviate traffic at school time, “there aren’t as many right turns this portion from Farm onto South, there are not that many right turns at that time at the times of the heaviest traffic.”

The crossing guard who mans the intersection holds up traffic for pedestrians to cross “and he’s not going to have cars turning right,” Police Deputy Chief John DeFederico said during the March 19 meeting, held at the New Canaan Police Department. The Work Group is an administrative team of fire, police, public works and parking officials that fields requests for traffic calming and makes recommendations to the Police Commission.

While theoretically “all the traffic stops and everybody is safe,” Mann said, that’s not always the case. Sometimes motorists turning right on red don’t look for or see pedestrians in the intersection because cars in the left-turn lanes block their sight lines, he said.

“And that does happen in the morning, as well, that we get a lot of traffic that is going southbound on South Avenue, that wants to make the left turn, and they jump out, especially when that traffic backs up, they jump out and they get into that northbound lane to make that left turn,” DiFederico said.

Based on the state’s findings, Mann said New Canaan would keep the ‘No Turn on Red’ signs at Farm and South.