For these many years, whenever a dry towel or blanket was needed for a dog or cat at the New Canaan Police Department shelter, Animal Control Officer Maryann Kleinschmitt had to wait for the item to hang-dry from its last use—a worrying prospect in the damp shelter, where animals must be dried regularly after walks. 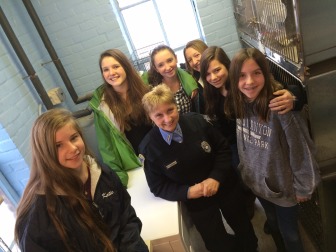 Sometimes it’s raining, as it has been this week, and even when it’s not, the grounds outside the shelter at the Lakeview Avenue Transfer Station often are dusted with the salt that the Highway Department uses, and if it isn’t washed off, the animals can get sores on their paws.

Thanks to a group of dog- and cat-loving Saxe Middle School girls, warm and dry towels are now just minutes away for Kleinschmitt.

“I am so excited about having this dryer,” Kleinschmitt said Tuesday, leaning against the shelter’s newly installed appliance and surrounded by members of Girl Scouts Troop 198 as a Nor’easter raged outside.

Following a field visit with Kleinschmitt at the shelter in the spring, the seven girls in the Troop decided to use their cookie money to fund the purchase of the dryer.

“I thought it was really sad that she didn’t have a dryer, so I thought if we bought one for her that she would be happier, and the animals too,” said Troop member Celia Sokolowski.

Added fellow Girl Scout Amanda Hill: “She had mentioned that whenever she would have any towels or whatever needed to be washed, that she needed to bring them home to do it and it wasn’t very productive, so we thought we could help the shelter by bringing her a drier.”

Kleinschmitt said the many towels that typically hang over eight or nine cages in the shelter (“we do incur a lot of laundry”) now get dry in 15 minutes.

Here’s a list of the Troop 198 members, all eighth-graders, at the time the girls purchased the dryer for the shelter (and their pets):

Four of the girls in Troop 198 right now are forming a group called “4 Girls 4 Paws” and they’re planning for their Silver Award (the second-highest honor in the Girl Scouts) to propose creating a fence around the concrete slab just outside the shelter, so that Kleinschmitt can walk the dogs and train them there, as well as paint a wall outside and otherwise beautify the facility. The project, which could be funded by bake and tag sales, would need to be approved by town officials.

Kleinschmitt said she’d love to have the area as a cordoned-off “meet and greet” section for shelter animals (such as current tenant Randy the Chihuahua) and prospective forever families.

Amanda Hill added that the girls may also seek to fund crates, toys or food for the animals, as needed.

The Troop is led by Donna Hill and Lisa Gaeta, and had been led at the time of the girls’ initial visit to the shelter by Dede Beck, as well.

The girls’ love of animals extends beyond the shelter, too: They’re putting together a brochure for new residents of the town who have pets, Donna Hill said. To be distributed by Town Greeter Stephanie Radman, who offers to deliver a welcome package complete with useful information to all new residents of New Canaan, the brochure will include information about how to get dogs licensed, the leash law and names of area veterinarians, she said.