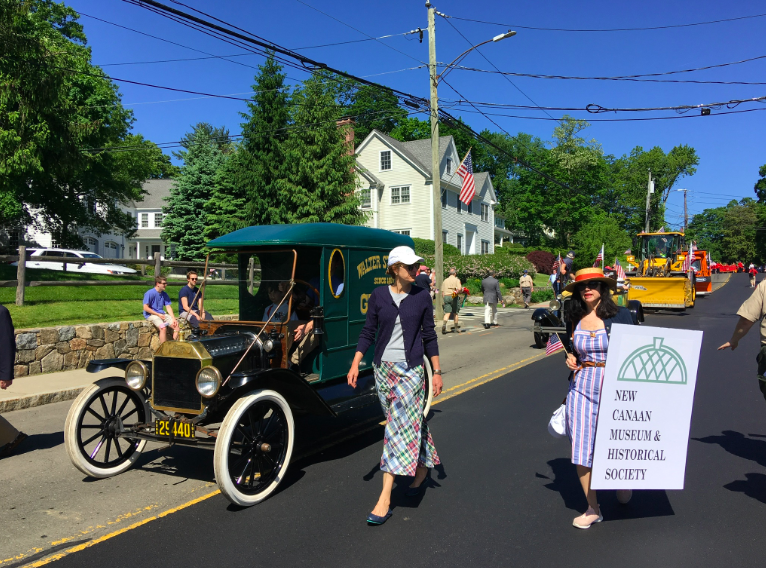 Aaron Hall, a U.S. Army captain and intelligence officer from 2004 to 2014, recalled feeling a “tremendous sense of pride” shortly after moving with his young family to New Canaan last fall. 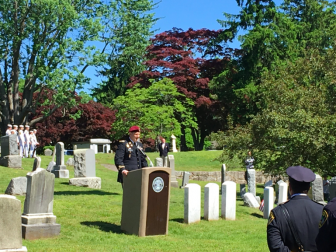 A member primarily of the Army’s 10th Mountain Division and 5th Special Forces Group, Hall said the first things he noticed on visiting Town Hall for the first time was the 9/11 memorial out front of the New Canaan Fire Department across Main Street, and the bronze plaques located within the northern entrance to Town Hall itself, listing the names of all New Canaanites who had served during U.S. conflicts since the nation’s inception.

The two memorials “made me realize as a veteran that this is the place that I wanted to raise my family, that I wanted my two kids to be able to grow up in, to take part in days like today, to be able to remember those who have given the ultimate sacrifice,” Hall told more than 300 people gathered in Lakeview Cemetery on a clear, sunny Monday morning following the town’s annual Memorial Day Parade. 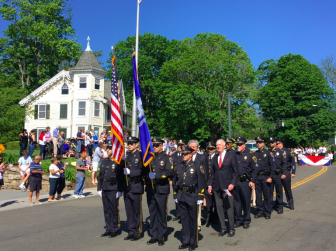 Members of the New Canaan Police Department during the Memorial Day Parade on May 27, 2019. Credit: Michael Dinan

“As much as Memorial Day is the unofficial start to summer, take a few moments to reflect and share with you a few heroic men, who in the words of James Garfield ‘loved their country that they too accepted death and as such made immortal their patriotism and their own virtue.’ ”

Hall was the guest speaker during the town’s annual ceremony to honor members of the U.S. Armed Forces who died while fighting for the nation, “so that we can continue to enjoy our inalienable rights,” he said. 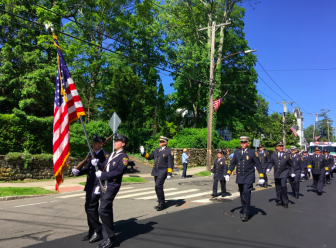 Members of the New Canaan Fire Department during the Memorial Day Parade on May 27, 2019. Credit: Michael Dinan

Town officials and residents joined members of the New Canaan Police Department, New Canaan Fire Department, New Canaan Emergency Medical Services, Girl Scouts, Hannah Benedict Carter Chapter of the Daughters of the American Revolution and other organizations for the solemn ceremony, overseen by VFW Post 653. It included comments from the first selectman, an invocation from local clergy, playing of the “Star Spangled Banner” by the New Canaan Town Band, singing of “God Bless America” by the Girl Scouts, placing of wreaths by the DAR’s Kathleen Tesluk and Parade Grand Marshal Lisa Melland, playing of “Taps” and gun salute. 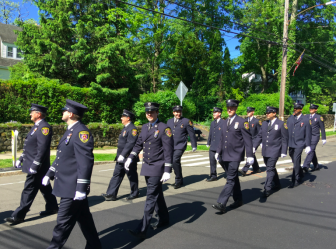 Members of the New Canaan Fire Department during the Memorial Day Parade on May 27, 2019. Credit: Michael Dinan

Hall thanked many of those groups, and others such as the Boy Scouts and civic organizations that had helped place more than 1,100 flags by the gravestones of military members buried in Lakeview and other cemeteries in New Canaan, those who care fo the cemetery grounds and those who had sold and purchased silk red poppies—which “serve as an emblem for keeping the faith for all of those veterans who died,” he said—in order to make the flag project this past weekend, and a similar one to place wreaths on the gravestones in November, possible.

“Most importantly and the reason we are here today, is to thank all of our valued military service members and first responders and their families, who went into harm’s way and gave the ultimate sacrifice so that each of us can continue to enjoy our inalienable rights of life, liberty and the pursuit of happiness,” he said. 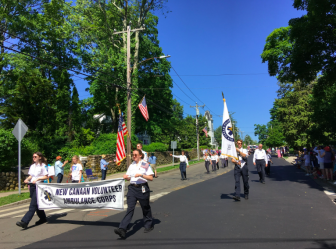 During his remarks, Hall remembered fellow Army members with whom he’d served overseas and who had died while serving—all seasoned military veterans, in one case a recently retired veteran. 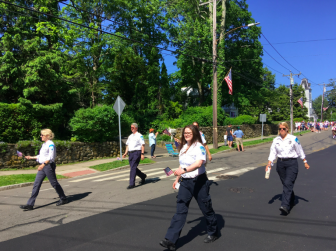 Hall served with Capt. Kevin Landeck as a fellow young officer in the 2nd Battalion, 15th Field Artillery Regiment, 2nd Brigade Combat Team in the 10th Mountain Division at Fort Drum in northern New York state. Landeck had entered the Army in 1990 and, in 2007, had completed tours in Bosnia, Africa and Korea, and was in his second tour of duty in Iraq.

“In August 2006, our 100-man company arrived in Lutifiyah, Iraq, and commandeered a bombed-out communications building,” Hall said. “It is safe and simple to say we weren’t well received. In our first 90 days, we received 120-plus indirect fire rounds into our outpost, encountered more than 75 improvised explosive devices during our patrols, and on more than a few occasions had to protect and defend the perimeter of our outpost from being overrun.”

Late at night on Feb. 2, 2007, under cover of darkness, “a patrol led by Kevin Landeck was prepositioning a fuel truck, in preparation for an upcoming mission, when Kevin’s vehicle was stuck by an Iranian backed explosively formed penetrator or ‘EFP.’ The EFP was remote detonated with so much force that it penetrated his armed vehicle killing both Kevin and his driver, Staff Sgt. Terance Dunn,” Hall said.

Hall called Memorial Day the “unofficial start to summer” and “both a celebration and grief, where we account for the honor of our heroes and reflect on their loss.”

He also recalled 1st Lt. Kevin Gaspers, 26—a friend from their ROTC days at the University of Nebraska—and his entire platoon, killed April 23, 2007 while leading his troops into battle in Sadah, Iraq. A truck armed with heavy explosives “slammed into an abandoned building, sending the building toppling on top of him and eight of his soldiers.”

“At the time, this suicide attack served as the deadliest attack on the historical 82nd Airborne Division since the Vietnam War.”

He also recalled Master Sgt. Robert Pittman, a man who in a 20-year military career had “too many combat deployments to count,” who volunteered two months after his April 2010 retirement from the Army to go with a team to Afghanistan. There, on July 29, 2010, Hall received a call that Pittman had been shot and killed while on patrol. Hall said he joined a chaplain in going to the Pittman house to break the news to Pittman’s family.

“My presence with the chaplain, in uniform that late at night, without a word needing to be said, their collective warm smiles turned into tears,” Hall recalled, choking up. “It didn’t take me long into my rehearsed lines to choke up with them.”

Memorial Day is “our nation’s solemn reminder that freedom is never free,” he said.

“It is a moment of collective reflection on the noble sacrifices of those who gave the last measure of devotion in service to our ideal and in the defense of our nation,” Hall said. “On this ceremonious day, we get ht pleasure of looking out into this cemetery to see the flags on the gravesite  of those men and women buried here in New Canaan, Connecticut, and remember the fallen. Today, we pray for a lasting peace among all nations.”