New Canaanites Who Died While Serving in WWII

Since helping restore a memorial walk dedicated to New Canaanites who perished during World War II in 2003 in Mead Park, town resident Jim Bach, a Korean War veteran, has spearheaded efforts to improve the visibility and appearance of this town landmark.

Those efforts have included re-planting of trees along the “Gold Star Walk,” creating a second footbridge to extend it and installing a new walkway and map—and a venerable nonprofit organization now is offering to help Bach preserve the memorial, which features a plaque listing names of the 38 men who died during the war (see gallery above for information on the servicemen).

The memorial dates back to 1948, and Bach—a 1947 New Canaan High School graduate who served as a U.S. Army sergeant from 1952 to 1954—said he wants to add some finishing touches, to ensure its longevity.

“I want to see it done, it was part of my life a long time ago and it kept me out of trouble at one time,” Bach said. 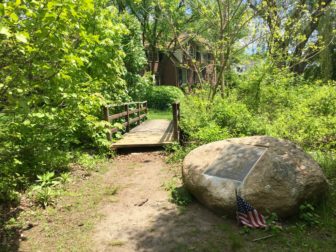 “We need to honor our 38 World War II veterans, it is a big deal because they actually died in the war and this area shouldn’t be so overgrown. You can see the value and the potential of this land,” said Lisa Melland, regent of the Hannah Benedict Carter Chapter of the Daughters of the American Revolution.

“The final thing that I wanted to get done with the memorial is to put in a bridge across the main stream that enters the park, on the west side of the garage. That is going to happen, it is going to get done this year.”

Gold Star Walk starts just inside the gate at Mead Park’s entrance off of Park Street and runs along the eastern and northern edges of the pond. Along with the plaque and footbridge, 38 trees were planted along the walk for each deceased New Canaanite.

In the past 13 years, weeds have encroached on the memorial, reducing its use and visibility, as have some new apartments and homes along Park Street above, according to Bach.

To restore it, Bach said she is focused on creating a new walk-in entrance from Richmond Hill.

Together with local landscape architect Keith Simpson, Bach said he envisions a “park within a park” to be carved out of the northern portion of Mead.

“Keith did a layout one time of this ‘park within a park’ which is just an entrance coming into the park from Richmond Hill where people would walk in.” Bach said. “Maybe there would be gravel and some benches, and some Belgian block to define the area, and then with an all-weather map to show what Mead Park and the lake look like.”

According to Bach, the efforts will be paid for out of a fund established when the project began, supplemented by private funding and his own savings.

Other local organizations are offering to help out. 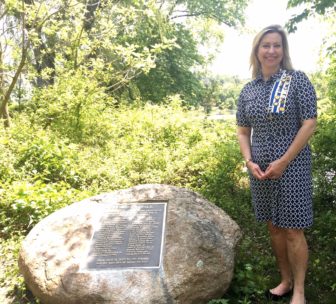 The New Canaan Chapter of the DAR is the fastest growing chapter over the past two years in the entire state, according to Lisa Melland, regent of the Hannah Benedict Carter Chapter.

Lisa Melland, regent of the Hannah Benedict Carter Chapter of the Daughters of the American Revolution, said her group would like to help raise money for the landscaping and other work.

“The DAR is going to do internal fundraising to help with this project,” Melland said.

The DAR’s areas of expertise are in line with the Gold Star Walk project, Melland said.

“The DAR gets involved in anything having to do with historic preservation and support for our military—those are the things that are really our touch points,” Melland said. “Also, for many of our members this project is very personal because a lot of them are descendants of these men or have family active in the military.”

As Memorial Day approaches Bach said he recalls the way he pays his respects each year.

“On Memorial Day, we make certain that we put a couple of flags next to the memorials, and the Veterans of Foreign Wars do that,” Bach said.

2 thoughts on “PHOTOS: New Canaanites Who Died While Serving in World War II”