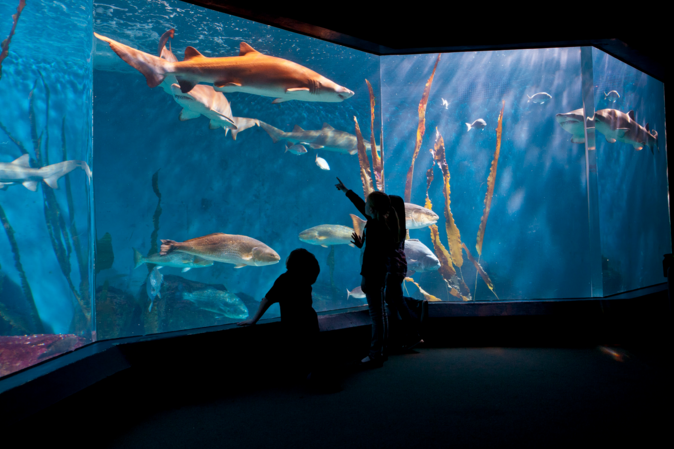 The Maritime Aquarium at Norwalk is readying to celebrate 30 years of living exhibits, marine science and environmental education in support of Long Island Sound, as well as its economic impact on Norwalk and Connecticut.

The popular family attraction opened on July 16, 1988, as The Maritime Center at Norwalk. (The name was changed to The Maritime Aquarium at Norwalk in July 1996.) It was created as a not-for-profit institution both to inspire stewardship for Long Island Sound and to spur a revitalization of the South Norwalk neighborhood.

— an announcement from the Maritime Aquarium

Today, based on traveler ratings on TripAdvisor.com, The Maritime Aquarium is the No. 1 aquarium in New England. It has the prestigious accreditation of the Association of Zoos and Aquariums (AZA), the body that sets the top standards for animal care and visitor safety at zoos and aquariums. 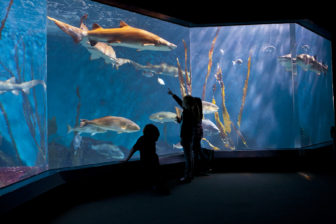 Photo from the Maritime Aquarium

Some 80,000 students in the Tristate Area connect with the aquarium and its educational programs each year. And annual attendance of nearly 500,000 means the aquarium has an annual economic impact of $25 million on the City of Norwalk and $42 million on the state of Connecticut through visitor spending and execution of its $12.3 million budget.

“We know that the Aquarium has been pivotal in the positive changes that have occurred with the health of Long Island Sound and in the vitality of South Norwalk over the last three decades,” said Dave Truedson, chief operating officer of The Maritime Aquarium. 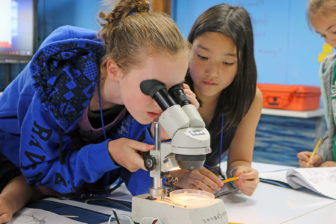 Photo from the Maritime Aquarium

The Maritime Aquarium is offers educational programs to homeschool students.

“But our work here is not done! Just as the Sound is a dynamic environment with new challenges, the Aquarium will remain fresh and dynamic in the exhibits we display, in the ways we present marine-science education, and in our roles in environmental research.”

As a motif for this milestone year, the Aquarium has adopted the traditional gift for a 30th anniversary: the pearl – only fitting for an aquarium in a community known for its oystering history. Even the seal in the familiar Aquarium logo is sporting a special pearl necklace.

Additionally, as part of the celebration summer, graphics have been added as markers through the Aquarium’s history, noting important events and when key exhibits opened. Similarly, movie posters for some of the Aquarium’s most-popular IMAX films are displayed with recollections of their significance. 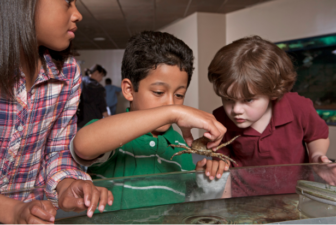 Your child can spend time interacting with freakish forms of life (great preparation for college!). Photo from Maritime Aquarium

“Thirty years ago, this institution’s founders hoped that transforming an old abandoned ironworks factory into an aquarium might drive the revitalization of the South Norwalk
neighborhood,” Truedson said.

“At that same time, Long Island Sound was in need of help as well, with fishkills, overburdened waste-water treatment plants, and medical waste washing up on our shores.”

Much has changed since opening day in 1988, in the Sound, in the Aquarium and in the
surrounding neighborhood.

Within the Aquarium, over the last 30 years:

Outside the building, the Aquarium today:

“Certainly, with the opening of the SoNo Collection next year and the Walk Bridge
reconstruction starting next year, we and the neighborhood are in a period of change,” Truedson said.

“But The Maritime Aquarium is poised with the best staff, the best board, the best volunteers and the best community partners to respond in exciting, visionary ways.”