Around Christmas last year, town resident Ryan Davis recalled, locals began contacting his mother about the availability of an out-of-stock and hugely popular Monopoly-based board game that had been customized to New Canaan.

Barbara Davis had created ‘New CanaanOpoly’ 10 years ago as a fundraiser for a local nonprofit organization. 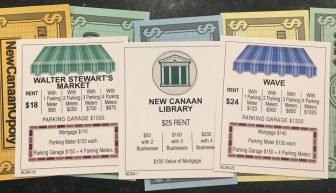 For Ryan Davis, the interest represented a chance to breathe new life into the old board game in order to benefit one of the most widely anticipated fundraising efforts in town.

Soon, New Canaan High School alumni Thomas and Spencer Williams joined the effort, and a newly updated version of New CanaanOpoly is in production and will be available for purchase in the fall, Ryan Davis said.

The project is being funded, in part, by local businesses who are advertising on the properties on the board—what the group is calling “awnings”—as well as Community Chest cards. Ryan Davis said the goal is to raise $25,000 through the advertising and sales.

Those who remember the game’s original rollout know that it has a similar setup to that of Monopoly, Ryan Davis said.

“We wanted to keep the classic feel of the game while adding [New Canaan] stores in order to add a new dynamic to the game and entice more people to buy it,” he said, adding that each space on the board has sold out. In the New Canaan version of Monopoly, spaces on the board normally reserved for railroads will instead be occupied by sponsored town landmarks, such as Town Hall.

A favorite for many when playing Monopoly is the choosing of one’s “token,” or the piece each player moves along the board as they advance. While the 10th Anniversary Edition has yet to unveil its tokens, the 2007 version of the game boasted a May Fair ferris wheel, Old Faithful fire truck, dog, horse, clock tower and rotary wheel in reference to some of New Canaan’s most beloved traditions and landmarks.

“The game should be ready to be sold in early November,” Ryan Davis said. “So right in time for the holiday season.”

One thought on “Popular ‘New CanaanOpoly’ Board Game To Return, Thanks to Local Resident”