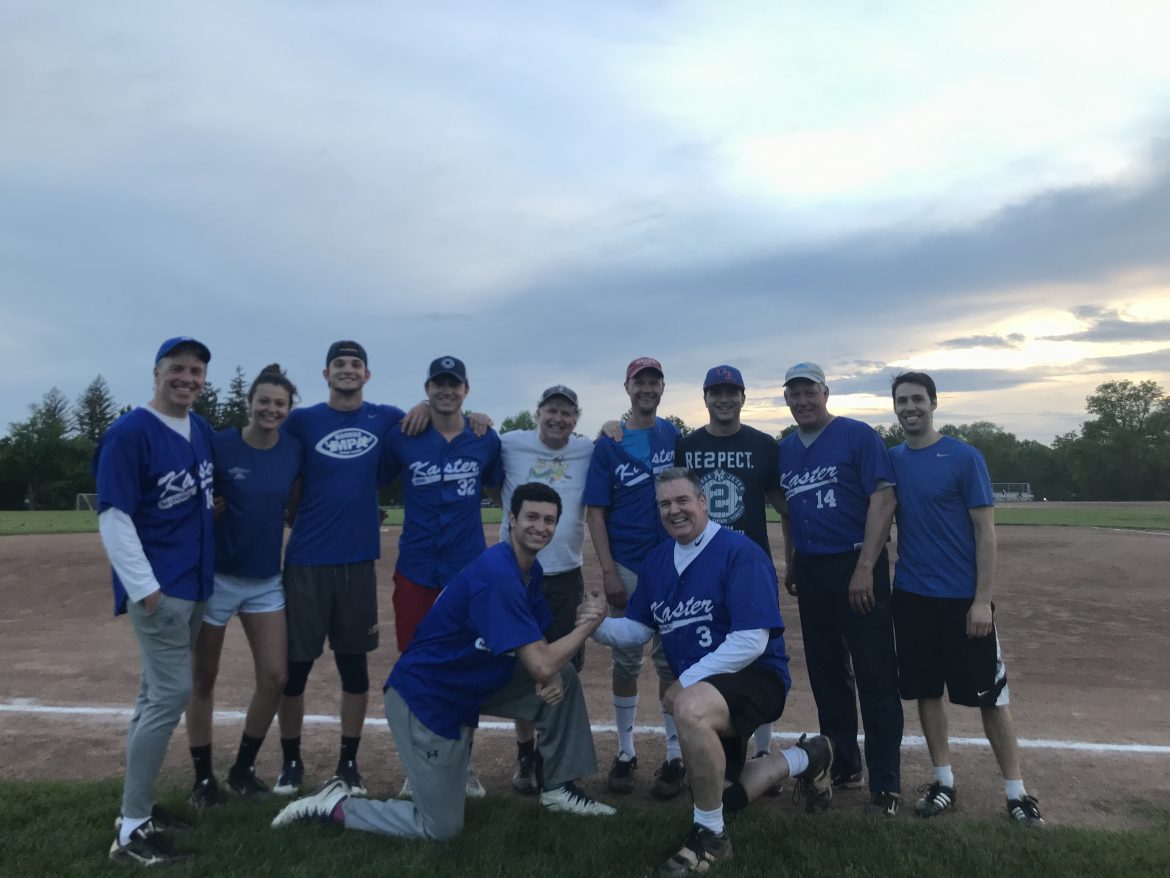 Kelly Conheeney, second from left, and the Kaster Moving team after a game at Waveny on May 22, 2019. Credit: Olivia Flaherty-Lovy

The men’s slow-pitch softball league at Waveny has been a part of New Canaan resident Kelly Conheeney’s life for as long as she can remember.

Her father, Tom Conheeney, joined the league shortly after moving to New Canaan in 2000 and her older brothers, twins James and Tommy, were quick to follow.

“I’ve probably [been] coming to their games since I was born,” Kelly Conheeney said Wednesday night, standing near third base on the very same softball pitch where she’d cheered from the sidelines as a girl.

The 19-year-old had just gone 2-for-4, with one RBI and a pair of sharp singles to left field, as the first-ever rostered female player in what had been an all-men’s league for more than a half-century.

“Tonight was just another game of softball,” Kelly Conheeney said.

For 65 years, the New Canaan Recreation Department’s summer softball league has been restricted to males. This week, the league’s commissioner, Recreation Department Assistant Director Bill Kapp, announced a change to its by-laws permitting female players in what now is the “New Canaan Adult Softball League.”

The Conheeney family lodged a request to allow her to play with Town Hall, Kapp said, “and there was some research done where they found that the town should now permit women to play.”

So is the Kaster Moving team that started her at first base.

Kelly Conheeney played on King School’s varsity team as an eighth-grader and would go on to help lead the Vikings to two FAA titles and one New England Championship.

She was motivated to join the local rec league by her love of softball and because New Canaan no longer has a women’s league.

“We had always joked, like, ‘Throw Kelly out on the field, put her anywhere,’ ” she said. “We talked about it and decided: Let’s make it happen. Let’s play.”

According to Kapp, the Conheeneys had tried to have her join the league last summer, but missed the roster cutoff date.

Selectman Nick Williams, who was instrumental in getting the change made, said there had been “some opposition” internally to it.

An attorney who has advised the town on Title IX matters, Williams said in an email when asked about the matter: “From a strictly legal standpoint, it’s pretty clear that a municipal recreation league would violate Connecticut law were it to deny the application of a woman on the basis of gender. More importantly however, from a policy perspective, this is absolutely the right thing to do, particularly when there is currently no town women’s softball league as an option. And the argument that permitting women to play would cause excessive safety issues is specious. Good heavens, we’re talking about softball here, not mixed martial arts. For the record, as the father of a daughter and the husband of a wife, I know from firsthand experience that a woman can pretty much do anything a man can do, and very often do it better.”

In fact, one prominent local female athlete had played in a game in the men’s league years ago, leading to the restrictive rule, Kapp said. Priscilla Schulz—a 2011 FCIAC Hall of Fame inductee who has coached varsity New Canaan High School sports including basketball, softball, tennis and golf, which has earned county and state titles in recent years—played in a single game for the famed “Chicken Street” team, Kapp said.

Rosters for the league remain open until June 1. Anyone, male or female, who is a resident of New Canaan, a graduate of New Canaan High School or St. Lukes School, or who works full-time in New Canaan is welcome to join before the deadline, Kapp said.

Asked for his thoughts on the rules change that led to his daughter being admitted into the league, Tom Conheeney said: “We really appreciate the town being flexible like this and the selectmen’s office and the Town Council members both getting together and looking at this. This is a very family oriented town. Here are four of us playing together as a family, and my wife comes to almost every game, so it just goes to show what’s great about New Canaan. A lot of towns wouldn’t be flexible like this, so the fact that this town took the time to look into it and make what I think was the right decision—we’re really proud of New Canaan.”

[Video above courtesy of the Conheeney family.]