First Selectman Kevin Moynihan said during a press briefing in his office Thursday that the town now knows how much it would cost to convert the privately owned “Covia” building at Elm and Grove Streets into a home for the Board of Education and New Canaan Police Department, though he declined to share that figure. The town and Covia remain unable to agree on a sale price.

The New Canaan Police Benevolent Association is conducting a fundraiser by phone, so calls made on the organization’s behalf are not fraudulent. If a resident is unsure whether a caller is legitimate, he or she can take down that individual’s name and call the NCPD non-emergency number at 203-594-3500 to check. The fundraiser runs through June 30. 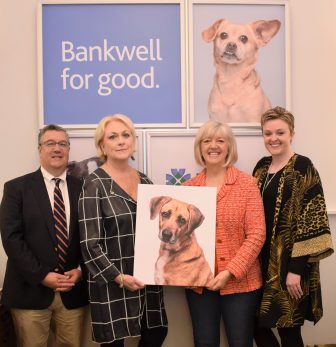 Bankwell has donated $7,500 to support the Cathy Kangas Foundation in bringing awareness to the homeless pets in our community and finding them their “furever” homes. Kangas, a town resident and CEO of PRAI Beauty, created “Free the Shelters” events that take place throughout the nation, where her foundation covers all adoption fees at shelters. The next one will be held over Father’s Day weekend in June. 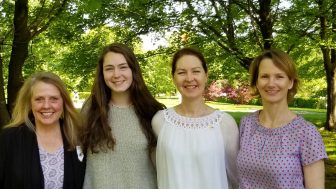 Congratulations to New Canaan High School senior Kate Reeves on winning the P.E.O. STAR Scholarship for the 2018-2019 academic year. Daughter of Julie and Michael Reeves, Kate was recommended for this scholarship by P.E.O. Chapter N of New Canaan. She has been accepted and will attend Georgetown University where she will begin her study of political science and history. It’s a $2,500 scholarship based on excellence in leadership, extracurricular activities, community service, academics, and potential for future success.

The Board of Selectmen voted 3-0 Tuesday to approve the hiring of Maria Ann Coplit as town engineer in the Department of Public Works. DPW Director Tiger Mann said he is “very excited” for Coplit to start after a “long process” of filling the position. She will begin July 1. Employed for the last 22 years as a civil engineer at a White Plains, N.Y.-based firm, Coplit graduated in 1996 from Duke University with a bachelor’s degree in civil and environmental engineering, according to her resume. Town Planner Lynn Brooks Avni is listed among her references.

New Canaan Crew has qualified for for the US Rowing Youth National Championships, to be held June 4 to 9 in Sarasota, Fla.

About 1,500 students, 1,500 parents, 525-plus Taff and 125 community members responded to the Board of Education’s school start times survey, Superintendent of Schools Dr. Bryan Luizzi said Monday night. The results of that survey will be compiled by the consulting firm that ran it, and presented at the Board’s June 24 meeting.

The town website relaunch is set for some time in the next two weeks, Information Technology Director Chris Kaiser said during the selectmen meeting.

New Canaan Police on May 20 launched a “Click It or Ticket” seat belt enforcement wave that will run through June 2.

The selectman also voted unanimously to hire Susan McGlone as a seasonal worker in the Town Clerk’s Office, and her responsibilities will include dog licensing.

Moynihan said the Board of Finance like would hold a public hearing and possible vote on the proposed sewer fee system at its June 11 meeting.

Finally, a reminder that the Memorial Day Parade will start promptly at 9:30 a.m. Monday and conclude with the ceremony at Lakeview Cemetery. In the event of heavy rain, a cancellation notice will be posted on the Town website; newcanaan.info  In place of the parade a Memorial Ceremony would take place at the Town Hall with limited seating.