Editor’s Note: The following is published in advance of the “Forum on Public Buildings Part II,” to be held 7 to 9 p.m. (6:30 p.m. coffee) on Wednesday, Jan. 9 at Town Hall. Questions for panelists can be submitted here.

Submitted by Libby Butterworth, on behalf of the New Canaan Preseration Alliance:

With its sunny yellow facade, this large transitional high Victorian gothic revival/Queen Anne building is located next to our Town Hall. 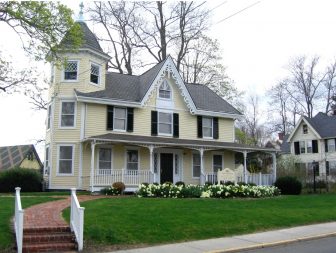 This gracious home was built in 1859 “on speculation” by builder and sea captain Sereno Ogden. He had inherited some of the Nash property on the deaths of his wife Elizabeth Nash Ogden and their son. The Nashes were prominent early landowners, owning the land on the west side of Main Street, from present day Morse Court to the Red Cross building. Ogden’s own house occupied the site of our present-day Town Hall.

Vine Cottage, it is believed, started life as a simple Federal-style farm house. It was sold in 1861 with a half-acre of land, to Alexander Law for the sum of $2,000. Two years later, the home was sold to Albert S. Comstock and his wife Cornelia Carter Comstock, who would become founder of the New Canaan Chapter of the D.A.R. 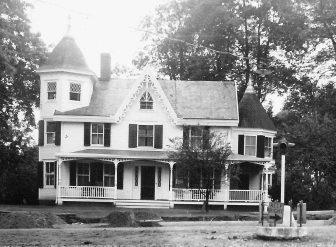 It is believed that the Comstocks later engaged Ogden to “modernize” their home. A report of The Connecticut Commission on Culture and Tourism lists the additions as including: “the cross-gable roof, imposing turrets . . . and a large four-bay Gothic porch which wraps around to the north and which has a tudor arched valance.”

The Comstocks named their home Vine Cottage because of the flowering vines which wove their way around the front porch. The name remains to this day. 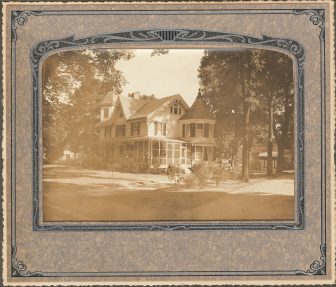 Vine Cottage presents and iconic and welcoming image of “Our Town.”

Acquired and added to the Town Hall campus in 1997, it now houses the Department of Health and Human Services.

Richard Bergmann, then-chairman of the Historic District Commission, stated in 1997 that, “The building and site are visually important to the town, not only because of its location, but because the entire town population loves and cares about this house and its unique character.”

Libby Butterworth has lived in, loved and restored seven antique homes, including the Benedict Thatcher Ells House (twice) and her present ca. 1845 home on Main Street. She is a member of the New Canaan Historical Society, Landmark Homes of New Canaan and is on the Board of the New Canaan Preservation Alliance.