Despite some concerns regarding outdoor lighting, members of the Planning & Zoning Commission on Tuesday night voted unanimously to allow a hot dog-themed restaurant to open in a commercial space in downtown New Canaan.

Rendering of the interior of the planned White Buffalo restaurant in New Canaan.

To be located down the “alley” at the top of Elm Street—formerly occupied by New Canaan Music (now on Main Street), near the former Chef Luis restaurant—the new establishment, “White Buffalo,” will include a 13-stool bar and rows of two-person tables that bring the total seating to about 35 to 40 people, according to New Canaan resident Dave Tonkovich, one of three local men who is launching the business.

A 1993 New Canaan High School graduate along with business partner Dom Valente—town resident Doug Harris is also an owner—Tonkovich described White Buffalo as a “place where New Canaan as a community can gather and support each other, whether that is having our teams over after a game, hosting a fundraiser for the lacrosse or hockey team, or honoring our local Police Department or Fire Department.” 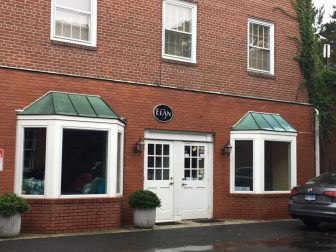 72 Park St. in New Canaan is located “down the alley” that runs off of Elm Street by the former Chef Luis space. White Buffalo is to be located in the space on the right. Credit: Michael Dinan

“We feel like this is something the town needs,” Tonkovich said during a public hearing at Town Hall. “You might say it is built by New Canaan, for New Canaan.”

Tonkovich reviewed some national hot dog consumption data and said that White Buffalo is designed to “fit the bill” for locals meeting after a game or with a friend or client “or when you are coming off the train.”

“Our goal is not to be all things to all people,” he said. 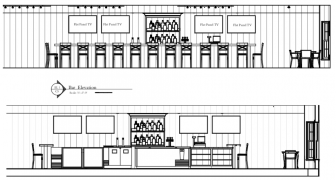 After closing the public hearing, Papp described the future location of White Buffalo as “a difficult building, a difficult site” and said, “I wish them well.”

“I have some doubt about how this will come out with the speciality, but I am not an expert,” Papp said. “I think kids like hot dogs and I think what they presented has some loose ends, but I believe that they will fill it in as it goes.”

Grzelecki said she had “major concerns” about the location, which backs up to a set of steps feeding the Park Street Lot above, and noted that across the alleyway from the restaurant is a covered garage that serves the rear of the restaurant (now Baldanza) fronting Elm Street. She added that she also had concerns about the amount of food served versus alcohol consumed. 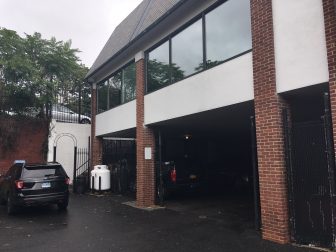 The covered garage (foreground) and start of the outdoor stairwell (rear) that caused some concerns among P&Z at the White Buffalo site plan hearing. Credit: Michael Dinan

Goodwin said that although “there are concerns that this is a ‘bar in drag,’ so to speak,” White Buffalo would be preparing and serving food just as other establishments in town do.

P&Z placed a condition on its approval that White Buffalo supply adequate outdoor lighting at the entrance of the restaurant.

Though it wasn’t immediately clear when White Buffalo is expected to open, Tonkovich said it would be closed Monday and open 4 to 11 p.m. Tuesday through Friday, 1 to 11 p.m. Saturday and 1 to 9 p.m. Sunday.

Commissioners asked whether White Buffalo would be open for lunch (not at first), whether it would offer outdoor seating (perhaps in the future, with town approval), whether the eatery would produce any exhaust (no), whether the hot dogs would be precooked (yes), how they’d be heated (possibly in a TurboChef-type oven) and how many people would be working there at a given time (three).

Commissioner John Kriz asked what sort of training the owners envisioned in terms of security.

Tonkovich said there would be a “zero tolerance policy” for anyone who failed to adhere to rules set forth and “dictated by the town.”

“So if someone were to wander out or break those rules, we would tell them that’s not acceptable,” he said.

During a lighter moment during the hearing, Kriz declared that he is “not a hot dog eater” and Tonkovich said: “We will turn you into one. We will provide Zantac.”

White Buffalo’s owners met with several vendors of hot dogs and bratwursts, did its taste-testing and the product selected is “exceptional,” Tonkovich said.

“These are really spectacular,” he said.

The idea for White Buffalo was born on Mellick Field at Mead Park 30 years ago, according to Tonkovich, where he and Valente—a fellow baseball player through New Canaan’s youth leagues—talked about opening their own hot dog place. Back then, the eatery serving Mead Park was the “Kwik Stop” van run by Connie Delong. One item on the White Buffalo planned menu is “The Delong Dog” with chili, cheese and bacon.