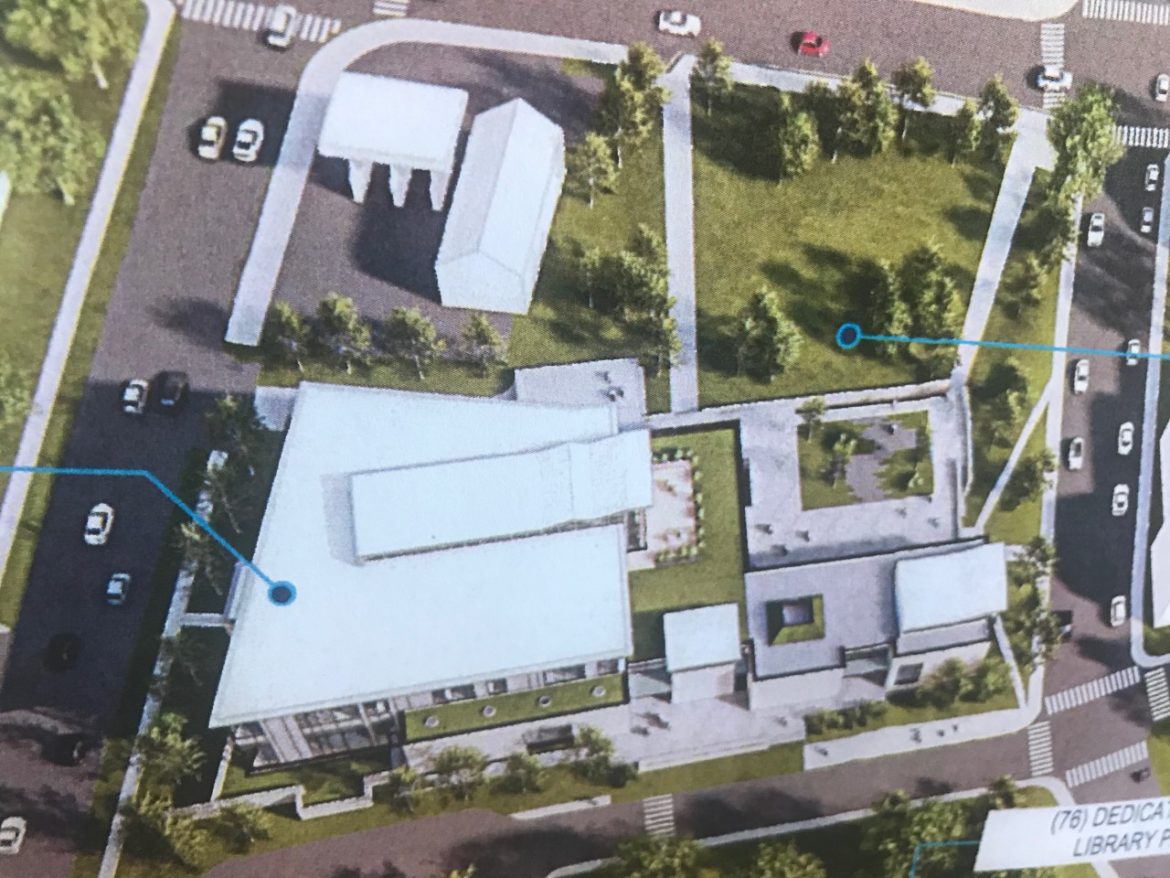 An overhead view of the proposed new library. Specs by Turner

The town has received 100-plus letters regarding New Canaan Library’s applications related to a widely discussed plan to rebuild the downtown facility, according to documents published on the municipal website.

Listed along with the library’s voluminous applications under the site’s Planning & Zoning section, most of the letters call for officials to preserve the original 1913 structure, though 24 of those—nearly half of the total—are identical form letters whose signatories identify themselves in many cases as out-of-town or out-of-state.

In some cases those submitting the form letter to various town bodies appear to have copied and pasted it without taking the further step of filling out their own names at the end, so that the signature still reads “Name Email Address.” One person, Nancy Odell Rombach, signed form letter with her name and email, and then wrote “Used to be cedar lane, new canaan ,ct.”

The form letter itself refers to a “groundswell of New Canaan residents eager to keep our 1913 landmark library building in its original iconic location.”

Those advocating for approval of the library’s plans call the proposed new facility—as submitted, including a green space where the 1913 building now stands—transformative for the downtown, local businesses and wider community.

The Planning & Zoning Commission on Tuesday is expected to take up the library’s applications to build a new glass-and-stone exterior facility that features an auditorium, outdoor terrace, café and public concourse, and reimagines use of the organization’s gateway block to the downtown. The library is applying for site plan and Special Permit approval, text changes to the New Canaan Zoning Regulations and an attendant zoning boundary change.

The new library will cost about $35 million to build, officials have said, and construction will last for approximately two years. The library has requested a $10 million contribution from the town toward the project.

P&Z itself is expected to focus exclusively on the library’s submitted plans, including a revised parking proposal that makes use of a portion of the Center School Lot.

A draft Memorandum of Understanding tied to the $10 million town contribution is making its way through New Canaan’s funding bodies. Though one recent version of it includes a new clause that allows for a decision on whether to demolish the original 1913 library building to be put off during construction—and though some letter-writers refer to the draft MOU—P&Z is not expected to weigh in on that document. In fact, an attorney for the library asserted last month that the fate of the 1913 building will need to be decided by P&Z as part of its decision on the library’s site plan.

Some of the letter-writers advocating for the library’s project refer directly to the 1913 building.

Amanda Martocchio, a New Canaan resident and architect who has served on the library’s Building Committee, said that the benefit of the new library “will far outweigh the sacrifice of the 1913 building, which is necessary to execute the comprehensive architectural solution.”

It’s not possible for the new library to achieve its objectives while preserving the original structure, she said.

“The 1913 building, as a small stand-alone annex on the library campus, would contribute minimal interior space for library functions,” Martocchio said in the letter. “It would require its own mechanical, plumbing and electrical systems, and an ADA bathroom that would extensively reduce its already limited usable footprint. Mechanical systems required for a freestanding 1913 building would duplicate those required in the new building at a redundant cost. A freestanding annex would add considerably to the construction budget, require expanded library staff, and increase the library’s operating costs going forward.”

“The 1913 building would fall in the middle of the green, leaving the outdoor space divided in two: half located behind the 1913 building and along the current gas station, and half along Main Street. The elevated existing grade surrounding the 1913 building would create a mound in the middle of the lawn, reducing the potential for large outdoor gatherings. Other town greens, such as God’s Acre, have contributed to the fabric of our town and have served as important community gathering places. Providing another green space will serve as a pedestrian destination from the town center in keeping with New Canaan’s reputation as a walkable town.”

And keeping the 1913 building would not only require “a time-consuming and costly re-design,” she said, but also “would be a sub-optimal solution.”

“Inclusion of the 1913 building would be inconsistent with the library’s sustainable, forward thinking and comprehensive design. Although I would be sad to lose the 1913 building, I am excited by the new New Canaan Library project and the positive contribution it will make in our community.”

Other advocates for the library’s project cite its forward-looking design and functionality as a much-needed and new draw to the downtown and the new building’s ability to host even more and wider-ranging types of programs.

Vicky Merwin said the planned new library green “is incredibly exciting to me and many other families.”

“Ever since the ‘Pop-Up Park’ was eliminated, I’ve been yearning for a centralized location to simply relax in town and this far exceeds my expectations,” Merwin said in her letter. “I can envision my baby’s playgroup meeting there then heading into town together. I can see older versions of my children having a safe, expansive place to hang out in town after school other than the ice cream shop. From my experience as a board member for Newcomers and a local preschool, I absolutely see this as a go-to venue for countless events and programming that we have been struggling to find, all of which will bring more people to our downtown businesses.”

Some the letters submitted to town officials are just one or two sentences long—for example: “Please protect the old library building. It was built to last with local stone and last it should” (Eileen Aliprandi); “Please DO NOT RAZE the 1913 Library. It is the most beautiful building in the town and reflects the history and aesthetics of the town” (John Lydon); “Leave our library alone” (Constantine and Xanthipi Joannides) and “We support forward-looking change that keeps our town offerings current” (Megan Wunderlich on behalf of the Wunderlich family).

Another person who used the form letter, Sasha Lawer, published it beneath her own comments, including a call for the town to “[p]lease make this a win-win.”

“There are ways to create a new library without destroying one of the few remaining old buildings that give [sic] New Canaan its character,” Lawer said. “It is bad enough that Karp’s ‘vue’ has made our town look like a cruise ship has docked in the middle of it. Please do not let this perversion of what was once a beautiful New England town continue. We all know the current economy will go ‘bust’ in the not too distant future and New Canaanites will be stuck footing the bill for a project that not all believe is the correct solution for the town’s needs.”

Keith Simpson, a town resident and New Canaan-based landscape architect, said in a letter to P&Z that he is “not objecting to the new library building itself, but, along with many other people, I am very concerned about the prospect of the demolition of the historic 1913 portion of the building and its gallery, which I believe does not need to be, and should not be, chopped into pieces, moved or bulldozed.”

“I will have, what I believe to be, a fair, sensible, viable and responsible solution to this dilemma, which I would appreciate the opportunity to describe to the Commission,” Simpson continued. “It will propose for your consideration certain conditions which could be attached to any approval granted. My suggested solution will not hold up the project if accepted.”