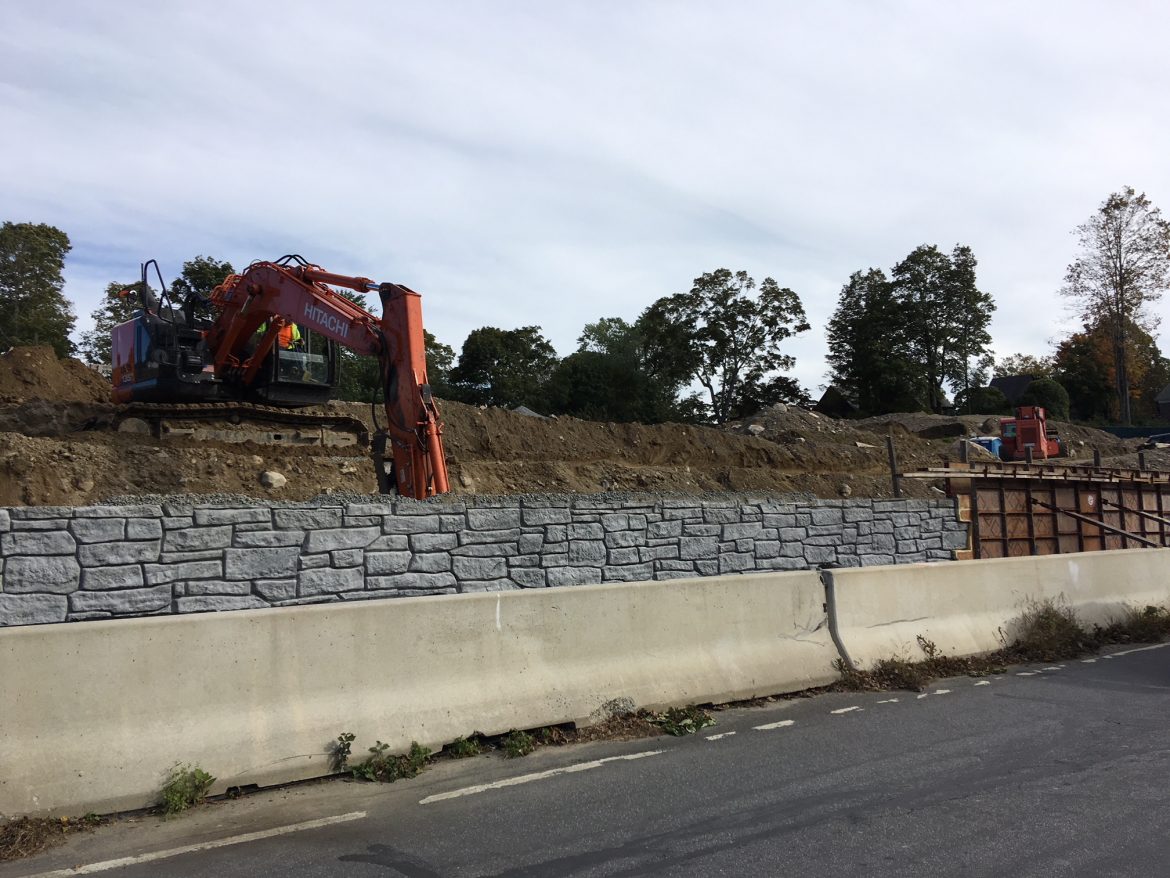 Saying they’re disappointed that the materials they thought a local builder would be using for a retaining wall are not what has materialized along Park Street, members of the Planning & Zoning Commission on Tuesday night asked the developer of Merritt Village whether similar “faux-looking” structures could be expected.

Weeks after addressing the matter of the retaining wall with New Canaan’s legislative body, Arnold Karp of Karp Associates came before P&Z to during the appointed group’s regular meeting.

According to Karp, a second retaining wall above and behind the one that’s caused so much fuss is to be built, and there’s also one that curves around where motorists will enter Merritt Village from Park Street.

Even so, Karp said, the retaining walls will be capped and partially hidden by plantings, and the buildings themselves—which feature natural stone and cedar shingles—will be the focal point for passersby.

“I have to get a little more of the project on down the line before I have 18,000 architects who live in town telling me how it is going to look,” Karp told the Commission during its meeting, held at Town Hall.

As P&Z itself includes architects Laszlo Papp, Dan Radman and Kent Turner, Karp added, “I wasn’t counting anybody on the commission in the 18,000,” drawing laughter from the room.

Radman said, “But it’s only these three that you have to worry about.”

Merritt Village, a 110-unit apartment and condo complex approved by P&Z two years ago, following several months of hearings and a record-high number of conditions, is still about 18 months away from completion.

Even so, Chairman John Goodman said that P&Z has received “a fair amount of feedback from the community” regarding the retaining wall, and therefore asked Karp and Karp Associates COO Paul Stone to address the matter.

“It’s not like I’m going to build this and disappear,” Karp said. “I’m here for the duration.”

Speaking of the retaining wall in its current state, he added: “We are looking at something that against this backdrop is very noticeable. They are not finished. I have got lots of reasons to make sure this works, not just for myself and my partners, but for the town at large.”

Radmam said that the difficulty with the retaining walls is the landscaping and site plans call for a “fieldstone veneer wall finish” and identify “the ledge for the fieldstone veneer.”

“And then you go to the sections for the retaining walls and it shows the dotted line where the retaining wall finish is supposed to be, so the assumption was made that it is going to be a fieldstone veneer, so when it changed to a caste-in-place form, faux stone, what changed?” Radman said.

Stone and Karp said nothing has changed and “what we built is what we got approved.”

Regarding specific references to submitted drawings on file at P&Z that Radman cited, Karp said, “I can’t speak to that because the plans are about 1,000 pages.”

Turner said he didn’t think it was fair to judge the aesthetics of the retaining walls until the project is further along, though “it is disappointing to see that the finishing material is not what we thought.” He asked whether Karp would be willing to enhance the landscaping around the walls if they prove to be visible.

Karp said that was a “double-edged” proposal.

“I already think it is over-planted a little bit,” Karp said. “I would be happy to work with the commission and [Town Planner] Lynn [Brooks Avni] if there is something at the end of the project that doesn’t look very good.”

He added, “You are critiquing something that I have not built yet. That is not going to be the part that people will look at.”

Radman said what’s driving the commentary regarding the retaining wall is that the freshly poured-in-place concrete “is very monolithic looking,” even though it has texture. He asked whether something can be done to age, discolor or darken it.

Karp said, “The answer is, give us the 16 or 17 months that we need. We need to build the project and it will color naturally.”

Even as the sections of retaining wall are poured, critics have observed that they “like section one but not three, and two is OK,” Karp said.

“When the cap goes on, you will lose the first several inches of it,” he said.

8 thoughts on “P&Z To Merritt Village Builder: We Thought the Retaining Walls Would Have Different Materials”