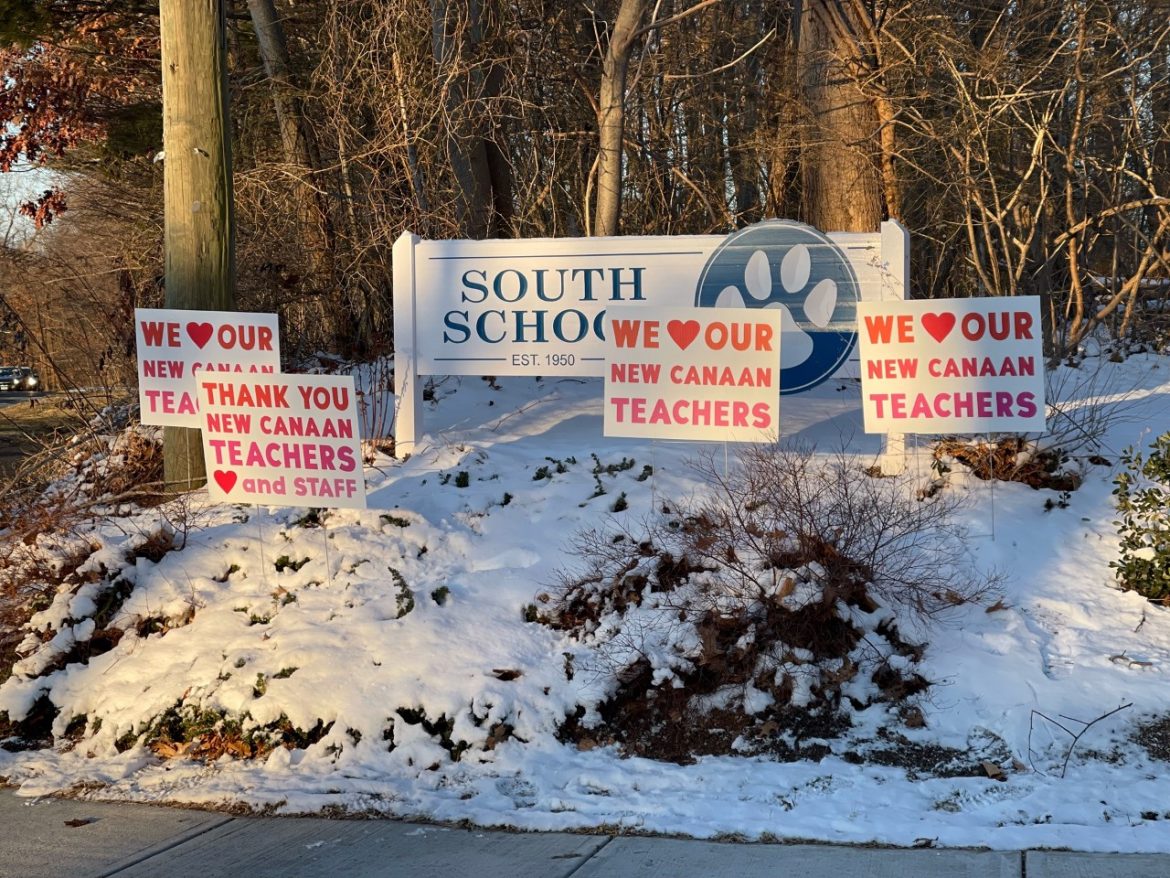 Outside South School on the morning of Feb. 14, 2022. Contributed

Teachers headed back to work Monday at public and private schools in New Canaan, including preschools, were greeted by lawn signs from the community expressing love and gratitude. Nearly 150 locals donated toward the project, conceived by a handful of residents in just over one week, with friends and family members helping place the signs in sub-freezing temperatures (the signs them sleds were made very quickly by Stamford’s Alpha Graphics).

We connected with the New Canaan resident who helped spearhead the effort, Sara Bakker, for a Q&A. 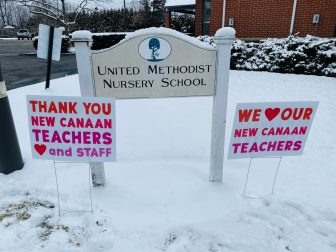 Outside United Methodist Nursery School on the morning of Feb. 14, 2022. Contributed

New Canaanite: How did this project get started?

Sara Bakker: I heard an interview with Michael J. Fox a couple of months ago. The interviewer said Fox sounded so upbeat even though he had suffered so much with MS. Fox said, “Gratitude makes my optimism possible.” I’ve been thinking about that ever since. The last two years have been so hard on everyone. So, what are we grateful for? What makes us optimistic? For me it’s my kids’ teachers. Hands down. They work so hard. I email them all the time with questions and concerns. They get right back to me. They are so thoughtful and hardworking. I know I don’t always take the time to say thank you. A lightbulb went off in my head when I knew Valentine’s Day was coming. Let’s show them love and gratitude! Let’s show them we know how hard they have been working and we appreciate it! Let’s put signs out to thank them. I was hoping to bring a smile to the faces of the teachers and the staff of all the schools—all the preschools, private schools, elementary schools, Saxe, the high school. We just want all the teachers and staff to know they are loved and appreciated. 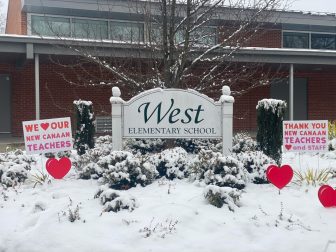 Outside West School on the morning of Feb. 14, 2022. Contributed

What has your own involvement been and what motivated you to do this?

I’ve never organized a project like this before, but I have friends who have so I asked for help. They helped come up with the idea of placing the signs in front of the schools and getting permission from the principals and pre-school directors. They gave me the name of the graphics place they have used before. They got me in touch with our wonderful sign designer and New Canaan mom, Bar Rucci. They helped spread the word via Facebook and Instagram posts and by sending emails to friends. And then of course they helped put the signs up when it was freezing cold outside! We wanted it to be a big Valentine’s surprise for the teachers, but we are hoping to re-use the signs over and over again. We will store them and hopefully bring them out for Teacher Appreciation week in May. 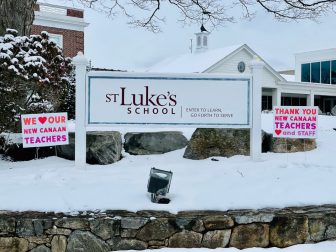 About how much was raised for it, and about how many residents contributed?

The list in my Venmo account keeps growing and growing. So far over 145 people have contributed. We asked for a suggested donation of $10, but some have given more. We have raised over $3,000 so far so we have covered the cost of the 200 signs and plan to use some of the remaining money to show gratitude in other ways.

How did the installation of the signs roll out, and what schools have they been placed at? 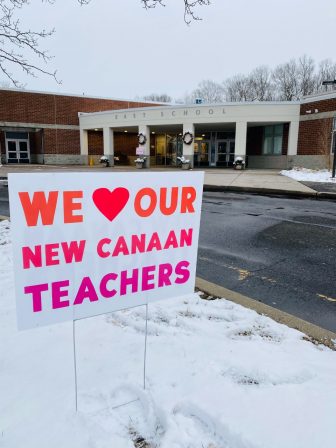 Outside East School on the morning of Feb. 14, 2022. Contributed 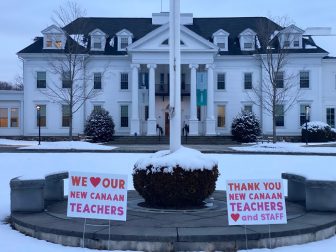 Outside New Canaan Country School on the morning of Feb. 14, 2022. Contributed

What has the feedback been, if you have had any yet?

So many community members have thanked us for doing this. I never dreamed we would get that many people to contribute or raise that much. It’s so nice that people feel the way we do—they feel gratitude toward our teachers and staff. So far, we have gotten several messages from teachers saying the signs brought tears to their eyes, that the signs made them feel appreciated, that they brought them “happiness and joy.” That’s why we did it. That makes it all worthwhile. 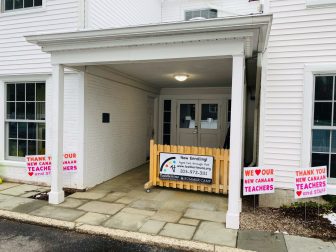 Outside Toddlertime Nursery School on the morning of Feb. 14, 2022. Contributed

What else, if anything, would you like to say about this?

Our teachers, staff, and administration are why our schools are so good and why people move to New Canaan. They are why Saxe was just named the #1 middle school in Fairfield County and the #2 middle school in Connecticut by U.S. News and World Report. Taking the time to express our gratitude for them is the least we can do. We love our teachers and staff! Let’s spread the love and gratitude and keep Project Gratitude going. Email your teachers, staff and administrators and tell them how grateful you are!