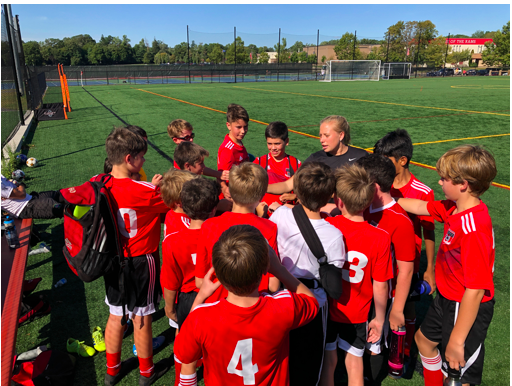 The incredibly rich and storied history of Notre Dame football has given the fans of the Fighting Irish 11 national championships and seven Heisman trophies, a fight song that induces goose bumps whenever, in all of their glory and splendor, the Band of the Fighting Irish marches out playing the ND Victory March.

More than any other college football program, Notre Dame has created heroes and legends on the field that have translated into tinseltown legends. I of course am referring to the two classics topping USA Today’s 25 best football movies of all time, “Knute Rockne, the All-American” and “Rudy.” Thank you in advance to the Fighting Irish for the key ingredients for my New Canaan Youth Sports story this week.

This past Sunday on the pastoral fields of New Canaan’s beautiful new athletic facilities, the NCFC Boys Red 2007 team embraced its new leader and Coach, Maegan Doyle. Coach Maegan is a highly accomplished soccer player who hails from Harwich, England, played for England’s U19 Women’s team and recently won the NCAA Division II National Player of the Year for the University of Bridgeport Women’s soccer team while leading them to the 2018 D2 National Championship.

And just before this weekend’s match, one of the NCFC Red ’07 Boys players, Javi Minuesa, broke his collar bone and will be sidelined for four to six weeks. A team favorite, Javi definitely will definitely be missed on the field and on the sidelines. See where this is going?

For those of you who have seen “Rudy,” remember the magical cinematic montage called the tryouts scene. Coaches psyche up the young men as they play their hearts out hoping to make the ND football team, the coveted 60 spots. Well, as a parent and observer, I watched and listened as Coach Meagan prepped these 12-year-olds with similar messages, capturing the hearts and minds of our boys. “Play for the team and not for a position—raise the bar on the team’s performance today and we’ll have the result you want—time to set the bar higher boys, it’s game time.” Love that stuff. Then, in Hollywood fashion, it happened. With his arm in a sling and an encouraging smile, Minuesa walked across the pitch to a welcoming chant of “JAVI, JAVI, JAVI!” Anyone want to hazard a guess to how the boys played on this glorious late summer afternoon?

Norwalk Junior Soccer Association’s 12-year-old boys looked big, organized and ready. But for those of you following the NCFC 2007 Boys, you know that we always look small against opposition whose 12-year-olds sometimes seem six years older.

And in some ways the diminutive Rudy-like stature of the New Canaan team makes the way the team plays with such big heart, all the more inspiring. And now rather than the usual play by play and results oriented reporting, I am going to give you a slightly different wrinkle, small anecdotes that I heard from the players and my own interpretation of what happens when young boys under the leadership of a gritty coach, band together for a common purpose. Just like in South Bend, “Onward to Victory!”

Drew Zoccolillo, sure-handed in goal, stood his ground, dove into the face of adversity shaking off every onslaught, kick, bump and bruise. Will Arnold, covered the midfield with aplomb and tenacity winning balls while stifling attacks before they developed. Marco Tignanelli found his footing and the back of the goal demonstrating that soccer isn’t a game of perfect and that results do happen with 100% effort. Stuart Hellman set a great example out-running and out-hustling the opposition which leads to control of the game’s tempo and flow. Gregory Martin challenged himself to be more intense, more focused and more physical and man that paid off in his play. Donovan West, denied his opposition the East the North and the South whenever they came into the NC goal area. John Murphy, poised and positioned for midfield breakaway led a controlled, deliberate and passing attack against Norwalk throughout the match. Rohan Shenoy, with wings on his feet sped down the sidelines repeatedly pressuring the opposition with Parker Della Bitta his wingman showing grace athleticism and determination on the other side of the field. Oliver Carr put his English football skills on display in the midfield bringing football home, this time to New Canaan. Drew DeGaetano, many asked what he had for breakfast as the proverbial Wheaties performance came with a championship winning attitude and effort. Alex Ertegino scrambled the Norwalk defense with his deft footwork and darting attacks deep into the opposing goal area. Simon Tchakarov willed himself to shut down the opposition’s strongest players matching their physicality.

Bookending wonderful performances on each end of the field, Rogan Lowe in center back and Dylan Ho at center attack each were awarded Player of the Week showing the type of fighting spirit that raises the bar as coach has urged. Ho scored a hat trick with a strikers mentality supported by well placed passes from his teammates. Lowe was a dominant force in central defense, passing well and dropping back to support his keeper.

So in closing, winning one for Javi, led by a championship winning player of the year coach may not make it to Hollywood like the fabled “win one for the Gipper” led by Knute Rockne. But the magic happens when athletes big and small find their Rudy.