Michael Rau’s kids had played a little soccer in New York City prior to the family’s move up to New Canaan last July, when he started in the position of assistant rector at St. Mark’s Episcopal Church.

The father of three—daughters Talie, 14, and Kay, 10, and son Peyton, 8—decided on moving to New Canaan that his younger kids should try out the fall soccer program run through the town’s Recreation Department. 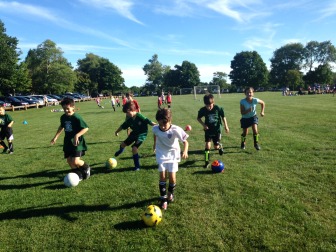 It’s a decision that Rau says immediately helped pave the way for his kids to get to know the New Canaan community and its residents.

“And it was great as a parent, too, because we got to meet new people, as well. There’s definitely a lot of family interaction going on. I ended up coaching, which is great for me,” Rau said on a recent afternoon.

“And for my son, it was his first time playing soccer and we didn’t really know how it was going to go. It was great to be in a positive atmosphere because of their approach, the whole mental well-being that they promote throughout the Rec Department. That was huge for him.”

Launched 47 years ago and run by the same born-and-bred New Canaanite for the past 35, the Rec Department’s venerable soccer program is seeing an uptick in the number of registrants for the first time in three years, since a New Canaan-based nonprofit organization expanded its offerings to include the same group of very young kids served by Rec.

The program has seen a season-over-season bump from 195 kids in the spring to 225 registrants (so far) for the fall, said Bill Kapp, the town’s assistant recreation director. A 1976 New Canaan High School graduate, Kapp played soccer at Ithaca College and went on to become a United States Soccer Federation coach who led the NCHS girls’ varsity team for its first 15 years, earning four state championships, a county championship and two Connecticut State Coach of the Year honors, as well as induction into the Connecticut Girls Soccer Coaches Association’s Hall of Fame. 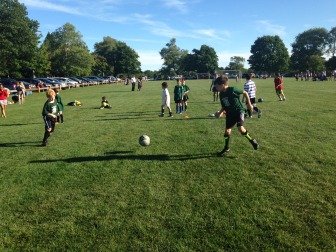 Kapp attributes the resurgence to what he describes as an inclusive, affordable and flexible program that is designed promote exercise and fun.

“It’s not about winning or having tons and tons of kids. It’s about fostering a healthy community and strengthening the town,” Kapp said. “If everyone left [Rec Soccer] and we only had 20 kids left, we’d find a way. Now here we are and we have increasing enrollment coming back at us.”

The New Canaan Rec program is parent-coached and serves mostly young children, with a bulk of them in kindergarten through about third grade, though it accommodates kids a bit older, too.

The program saw the number of kids participating in it fall off dramatically after 2011—that is when, Kapp said, the longstanding New Canaan Soccer Association expanded its programs to include kids in the same age groups that Rec long had served.

NCSA officials declined to comment on the organization’s impact on Rec Soccer at that time. However, the NCSA has seen an increase of its own year-over-year from the fall of 2014 to this year, from 747 to 900 players, officials said.

Speaking strictly as a parent whose kids have been involved in both programs and not on behalf of the NCSA (or as a selectman), New Canaan resident Nick Williams said the private organization has helped introduce soccer skills earlier in a way that benefits kids who later play travel, varsity or other higher-level soccer.

“The kids seem to be having just as much fun,” said Williams, who also had coached for several years in the Rec league.

For Kapp—who said he believes the league will maintain its figures in the 200s—part of the fun of Rec Soccer is that it satisfies a diverse group of kids, and the program encourages older beginners.

“Someone who says, ‘That looks like fun,’ as a fifth-grader, they have a place to come to,” Kapp said. “It relieves burnout, all the stress and anxiety that can come with year-round sports organizations. We don’t promote a lot of parental expectations.”

And for Rau, that’s a great fit. He said he’s seeing his son and daughter playing soccer for the first time with Rec league, and “there’s this whole positive community experience for them.”

“They [the Rec Department] really stick to their true objective and stay true to what they preach,” Rau said.