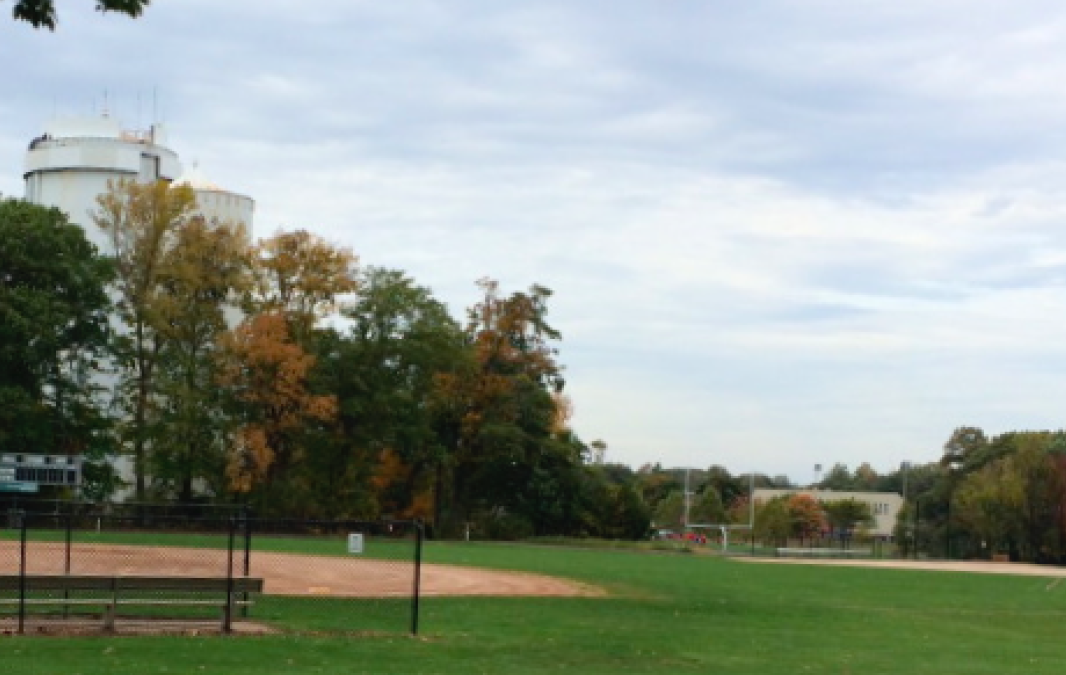 The Water Tower Field for softball can be seen on the right of this photo. It's located outfield-to-outfield abutting the varsity "Orchard Field." Credit: Michael Dinan

Participation in New Canaan softball has grown so much in recent years that in order to provide adequate practice time, a second field at Waveny should get lights for this coming fall season, officials said last week.

The organization that runs youth programs here, New Canaan Softball, has already raised $75,000 to light what’s known as the “Water Tower field,” and the Recreation Department is requesting an additional $50,000 from the town during this budget season.

New Canaan Softball is anticipating 240 girls in the program this year, up from 90 just five years ago, Recreation Director Steve Benko told members of the Board of Selectmen during a budget hearing held Thursday at Town Hall.

“There’s interest in it and they need more field space,” Benko said. “And one problem is with the coaches’ availability, because they are all volunteer coaches, is the time to practice is in the evening. And we can use the Orchard Field until 9 o’clock at night, but the other field, the Water Tower field, there was approval for the lights and they are willing to raise money for the lights, and to have that second field lit to give them addition time for practices, it would help the overall program now that the numbers are going up, which is a great thing.”

The $50,000 capital request is part of the overall $271,500 that Recreation is seeking for fiscal year 2020. Other items include Waveny athletic field fencing ($15,000), Waveny driveway lighting ($30,000), park shade umbrellas at Kiwanis Park ($16,500) and resources acing the all-weather tennis court at Mead Park ($45,000). The Board of Selectmen spending plan calls for a year-over-year spending decrease of .14 percent. After the selectmen, spending requests go to the Board of Finance and Town Council for review, with a final vote during the first week in April.

Campbell said the lighting of the second softball field at Waveny (the other one, called the ‘Orchard Field’—so named for the orchard that the Lapham family had kept there—has been lit for several years) is the Commission’s “highest priority.”

“The program has grown, it’s given so many girls an opportunity,” Campbell said. “They have already raised $75,000. We were not aware of the need until they came to us. We thought with all the funding for Mellick and Gamble Fields for the boys’ program, that it’s pretty incumbent on us to help support them. And it’s not a significant amount.”

She referred to a presentation that New Canaan Softball representatives had made at a Commission meeting in September—and perhaps to an unnoticed meeting held out of the public eye prior to that.

Selectman Nick Williams said he agreed with Campbell’s assessment, that not only was funding the project the right thing to do, but it also would likely be required under Title IX.

“It’s a pretty rigorous test and they look at things like disparities between spending, between playing time, between equipment,” Williams said. “The courts are pretty tough on that so I think this addresses all of those.”

According to Benko, town bodies including the Town Council, finance board and Planning & Zoning Commission had approved New Canaan Softball for lighting both fields at Waveny back in 2005, but monies available at the time funded only the Orchard Field project. Enough time has passed that the capital project likely would need fresh approvals from the town, he said.

Interest in youth softball is “trickling up to the high school,” Benko said.

“Because the high school team didn’t have a JV for two years, and then they had enough girls for a JV team last year,” he said.

Campbell said a plus of the softball program is that “it’s another activity for the kids to do.”

“It just gives girls another outlet as opposed to the spring is lacrosse for most girls in town,” she said. “And they’ve taken a bunch of kids and put them in another sport and it’s just another thing that’s a positive in town.”