Two ‘No Parking On Sidewalk’ signs have appeared on a very short stretch of sidewalk in front of the Mobil station on South Avenue, after a resident alerted town officials to the unusual habit of some motorists who parked on it. 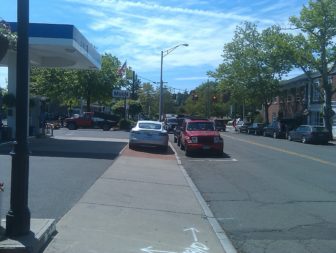 Here’s an example of parking on the sidewalk in front of the Mobil station. Contributed

The approximately 20-foot long stretch of sidewalk between the gas station’s two entrances for cars from South Avenue is differentiated in its brickwork, but is at grade with the adjacent lot that includes fuel pumps.

Members of an administrative team that field traffic requests said at a recent team that they received a formal complaint about the practice of some motorists who park there. 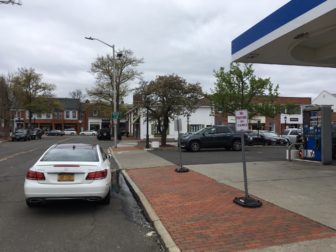 Here are the new signs set up on the sidewalk itself, on May 5, 2016. Credit: Michael Dinan

“I don’t want to put anything in the pedestrian way,” Department of Public Works Assistant Director Tiger Mann said of the situation at a Feb. 23 meeting of the Traffic Calming Work Group. It includes DPW as well as fire, police and emergency management officials.

It isn’t clear whether some motorists view the area as a parking spot or simply feel that pedestrians still can pass safely there, members of the group said.

Police Capt. John DiFederico recommended at the time that the New Canaan Parking Authority keep an eye on the problem there.