Just in from the district’s public information and communications specialist:

New Canaan, Connecticut – March 11, 2014 – Dr. Mary Monroe Kolek, Superintendent of the New Canaan Public Schools, has announced her retirement effective June 30, 2014. Following is Dr. Kolek’s letter, which was presented to the Board of Education.

After much deliberation and extended discussions with family, my husband and I have decided to relocate to North Carolina and, as a consequence, after 38 years as a CT public educator, with the last 10 spent in the proud service of the New Canaan community, first as Deputy Superintendent and currently as Superintendent, I plan to retire effective June 30, 2014.

As you might imagine, the decision to transition from a career and community that I love and to which I am deeply committed has been difficult. It has, however, been made easier because of my understanding that the New Canaan Public Schools is, by design, a system; one whose strength lies not in any few individuals but in the collective power generated and sustained by a culture and set of structures and processes that reflect a long standing commitment to excellence, dedication to service and an abiding respect for learners and learning as the community’s most valuable asset and key strategy for success.

I will always be grateful for having had the opportunity to work with and for some of the finest human beings ever amassed under the umbrella of any district, including Board members, educators, staff members, students and volunteers. New Canaan is an extraordinary place that stands as a model for what public education can and should be if we value each individual as a learner and work purposefully to grow intellectual curiosity, scholarship, innovation and a collective commitment to others and to community. There has not been a day when I have failed to reflect on the how fortunate we are as a school community to be able to offer our students a high quality education and expansive opportunities to explore, learn, serve, connect and lead.

The privilege of leading this district will no doubt stand throughout my life as the pinnacle of my career. I will carry forward with me the many lessons I have learned as the result of my work in New Canaan knowing they will serve me well no matter what is over the next horizon. Most importantly, I will cherish the relationships that have been forged with Board members, staff, town leaders, parents and community members as a result of working together on behalf of New Canaan’s children and citizens. It is my great honor to serve as Superintendent of the New Canaan Public Schools and I look forward to working with the Board and leadership team in order to ensure a smooth transition to the next school year.

Dr. Mary Kolek, for two years the superintendent of New Canaan Public Schools, is moving on from the district, according to multiple sources. 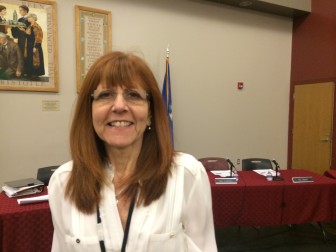 The announcement reportedly was made to staff in an email Tuesday morning. Kolek, Board of Education Chair Hazel Hobbs and communications officials in the district and superintendent’s office could not immediately be reached for comment.

NewCanaanite.com will update this article as more information becomes available.

The report follows the news last week that former West School Principal Jill Correnty’s position as Assistant Superintendent for Curriculum and Instruction was made permanent (instead of interim).

Kolek took the reins in New Canaan schools in March 2012, succeeding Dr. David Abbey, who had served in the district for 19 years.

She had started her career in South Windsor, CT as a special education teacher and served as a high school principal for six years prior to coming to New Canaan.

Kolek’s time in New Canaan has been marked by major changes—including the introduction of Common Core State Standards to the district—and difficult, often divisive decisions, such as the a closely watched budget process one year ago, determination of snow days in particularly difficult winters (especially last year) and the disciplining of a popular middle school teacher whose certification had lapsed.

In her Superintendent’s Welcome note, posted at the beginning of this academic year to the district’s website, Kolek said: “As a district, New Canaan’s standing in academics, arts and athletics continues to be among the strongest in the state and often nationally. Evidence of student achievement in both traditional testing and through an array of performances reflects our commitment to rigorous and relevant student learning, placing us in a very strong position as the state and nation transition to updated learning standards and expectations.  We are responding to these revisions in a customized and thoughtful way, having already expanded and deepened our curriculum to meet student needs and family and community aspirations.”