A New Canaan resident has lodged a complaint with the town regarding the proximity of parking spaces to crosswalks, municipal officials say, so they’re turning to a Fairfield-based traffic engineering firm to figure out whether a change is required. 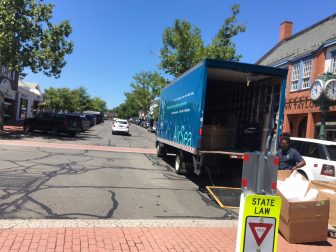 That stretch includes five crosswalks, and under state law, no car may park within 25 feet of a crosswalk, meaning that a change would appear to require New Canaan to eliminate spaces in the most desirable area of its downtown.

“Given the fact that if we change the layout it would change the number of spaces, we decided that it was best to have a traffic engineer take a look at it and give his interpretation on what the layout should be given the state statute, the town’s statute and the town’s requirements as far as P&Z in terms of spacing, angle of parking, curb length,” Mann said. 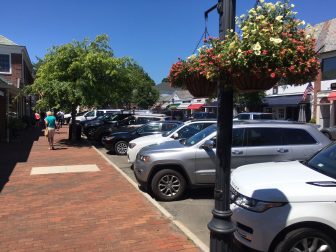 The Board of Selectmen is scheduled Tuesday to vote on a $6,200 contract with Frederick P. Clark Associates Inc. “for a conceptual parking layout plan for Elm Street from Main Street to Park Street.”

Under state law, “No vehicle shall be permitted to remain parked within twenty-five feet of an intersection or a marked crosswalk thereat.”

Asked whether data points to an accident history on Elm Street, Mann said no although, “It only takes one.”

The town specifically will ask the engineering firm whether it can “co-locate,” meaning non-parked areas near the crosswalk would be used for handicapped parking, Mann said.

It appears that the “25 feet” rule would reduce the number of spaces on Elm Street—for example, the area near the Moreno Clock would not allow for any parking at all, since two of those 25-foot “setbacks” would meet. One way to solve for the problem is to reduce the angle of the angled parking on the south side of Elm, yet as it is, vehicles backing out of those spaces must enter the far traffic lane in order to straighten out.

The town has worked very hard in recent years to increase the available parking downtown and specifically on Main and Elm Streets, offering new types of permits to employees of businesses there to get them off of those streets so that shoppers and diners can use them.

“Given the sensitivity” of what could follow from a change with respect to parking, “we are going to ask a professional to take a look,” Mann said.