Although rising senior Ryan Callahan hasn’t played soccer in a formal setting for more than six years, it didn’t stop him from giving the sport his best shot at the high school level for the first time. 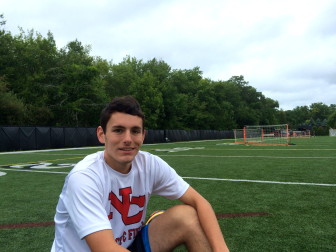 Having played rec soccer before moving to Texas for a few years, Callahan said that his interest in the sport was piqued again recently by three to four pick up soccer games a week with friends over the summer.

“I played here in the rec league as an elementary schooler. And I played it at the YMCA up until 6th grade in my town in Highland Park, Texas,” he said. “But overall it hasn’t been much. Every now and then I’ll play with some friends casually. People like Erik Burns, Michael Popper who are involved with the sport and who like it and watch it were actually a part of why I wanted to give soccer another try.”

Not only did playing with friends persuade Ryan to get back into soccer but the excitement of this year’s World Cup in Brazil also influenced him to play more. “I was kind of a convert with the World Cup. It was the first time I had watched a soccer game and I realized that I enjoyed it quite a bit,” Ryan said.

While Ryan believes that players who have been playing the sport for many more years than him will have an advantage skill-wise, he feels that he is physically up to the task with his experience on the cross country team.

“Before playing pick-up I was prepping for cross country so I had been doing long distance running as well,” he said. “I think I’ve improved my ball skills from day one but it’s still my major issue. I think with strength, speed, and running I’m on par or at least at a good level. But with ball skills I’m behind simply because other people have had eight years to get those.”