Russell, deeply loved golden retriever of Michael Dinan and Marie Maguire, died peacefully and surrounded by family at his Stamford home on Sunday, May 14, following a diagnosis of advanced and untreatable cancer. 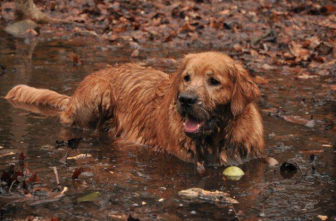 Born Oct. 8, 2006 in Weston, he was predeceased by his brother Wilbur.

In addition to his parents, Russell is survived by his brothers—Louis, Marvin and Dexter—aunt Roisin, aunt Jacky and uncle Eric, and lifelong friend Alfie.

He loved a room full of people. He loved holidays that freed his parents from work. He loved leashed walks in downtown Stamford and off-leash romps at the Mianus River Park, Tod’s Point, Lake Mohegan and Babcock Property, and attempted to greet each human passerby.

He was a savant among the housebroken: Only once did Russell pee indoors. It was in our old apartment on Bedford Street, after gorging on a bowlful of ice cubes as a puppy. He developed an uncontrollable shiver that lasted nearly one hour. Eventually, he cuddled up in bed with his dad, fell asleep and then let out a steady and impossibly long-lasting stream of water-clear pee that ended his shivering.

Russell’s fondness for ice cubes remained throughout his life.

He ate his kibble so fast that he would choke on it, and a specially designed food bowl was acquired to slow him.

He had a burnt-orange golden coat, beseeching brown eyes and heavy jowls.

Russell was so handsome that, when it came to at least one of his many fans, he quite literally stopped traffic. A man with a heavy eastern European accent who lived in the apartment building and had a Doberman named ‘Maldy’ would stop what he was doing whenever Russell appeared—in the foyer, at the elevator, on the catwalk, in the parking lot. Once, we were walking the boys along Bedford Street when the man drove past, turned his head, slammed suddenly on the brakes and called out in his trill, “Russell, Russell!” Russ speed-waddled toward the driver’s open window, his tail and whole lower half wagging forcefully.

He spent summers hiking the trails of the Mianus, typically at the front of the pack, and we called him “our official greeter” for the way he approached so enthusiastically those walking toward us—rushing past bewildered dogs to plop at the feet of their humans, awaiting praise and pets.

He often was filthy at those moments.

Russell loved rolling on his back in the dirt and muck, and he perfected what we called his “hippopotamus move,” entering a swamp or opaque still-water pool off-trail and then lowering himself on all fours so that only his eyes and the top of his head were visible.

He did the same in the Long Island Sound during winter outings to Tod’s Point in Greenwich, the beach where Russell exuberantly chased Chuck It-launched tennis balls on the wide, hard-packed strand. He fetched obsessively throughout his life, and even during his final winter at the point, Russell consistently beat far younger dogs to a tossed ball.

Tennis ball fibers wore Russell’s teeth to the point where the veterinarian urged us to switch to rubber balls exclusively.

Once, on a sweltering hot day in July, about 30 minutes into a hike with his dad, Russell went missing at the Mianus. Frantically, I called home for reinforcements and ran back along the trail screaming out for Russell—even phoning Stamford Animal Control to let the officers there know, through tears and hyperventilation, that my illegally off-leash dog had gone missing in the park. Marie and Roisin rushed to the park and came upon Russell, laying in the cool riverbed near the parking lot.

He jumped off of large rocks to fetch balls tossed into the Mianus River like the “dock dogs” of ESPN.

Russell yelped two or three times in his life. The noise he made most often was a wookie’s warble at the end of a yawn. He purred like a cat, which sometimes frightened strangers.

He loved to be rubbed under his chin and along his jaw line—an area Russell scratched so much it grew hard as leather. In his last year, Russell discovered a missing vertical slat in the railing of our second-floor landing at home, and he started laying on the wood floor perpendicular to it, sticking his head through the open slat and, in ecstasy, rubbed his jaw against the edge of the floor.

In the mornings and as part of the daily feeding routine, before arthritis had him sleeping downstairs nearly exclusively, Russell waited for his dad on the third stair down from the landing, and many minutes of petting and joking about bad breath and bedheads were passed there.

Russell was so sweet that we often called him ‘Wuzzle’ or just ‘Wuzz.’

He was also called “Our Supermodel,” “Sport Billy,” “Smedley Head” and “My Boyfriend”—that last by Marie, as Russell spooned with her in bed.

He had stinky breath, arthritis and was susceptible to ear infections and skin sores that he licked raw. His legs trembled after running. In middle age, he developed a benign hematoma near his tail and he dragged his backside on the ground to scratch it, drawing misdiagnoses of glandular problems from scores of helpful strangers.

He disliked riding in the car and grew extremely nervous if ever the TV remote was tossed between people in the living room.

He disliked a lit fireplace. He loved to be groomed.

The only meanness he ever showed was in the weeks after he became a middle child, when we adopted Louis in November 2009. Russell often snapped at Louis during that period, though their bond would grow strong enough that Louis would howl like a banshee if ever Russell was separated from him. In recent years, Russell would take his accustomed place after breakfast on the end of the sofa, and Louis would step up to groom him, licking his paws, eyes and muzzle.

He loved lying in his mom’s arms while she sat in an armchair, as though he still weighed 10 pounds instead of 80. He loved walking close to a sitting person, ducking his head down and pressing into them, eyes closed. As a young dog, he loved digging into the beach sand of Cove Island in the summer, and his favorite spot at home was the southern end of the large brown sofa in the living room.

He traveled for his first three summers to the Adirondacks for a week of camping, and there he climbed Baxter and Noonmark Mountains. One summer while climbing Baxter, he memorably snatched a sandwich from the hands of his human cousin, Cooper.

He had visited Boston and Maine, and last summer vacationed in Myrtle Beach, S.C.