With temperatures ranging from the mid-40’s to high-70’s, this spring’s weather has kept New Canaanites guessing—perhaps no group more so than local merchants. 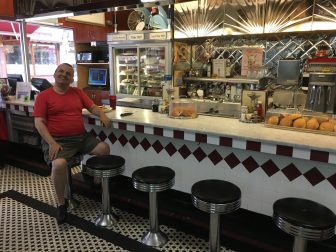 Local businesses have been feeling the effects unusual weather patterns, and though customers are still walking around, buying clothes and eating out, merchants are hoping that consistently summer-like temps arrive soon.

Despina Tsartsabalidis, manager of the New Canaan Diner on Forest Street, said that the unusual weather has slowed down business due to customers preferring to sit inside, decreasing the amount of seating available.

“It has affected the outside business,” Tsartsabalidis said. “Right now, it’s cold, no one is gonna sit outside, even though we have the heaters. Last year it wasn’t like this. It was warm last year at this time.”

Next door, Nuccia Mazzonetto, owner of Gelatissimo, said that while her business is also feeling the effects of the weather, people still want to get out of the house and walk around town.

Mazzonetto told NewCanaanite.com: “Maybe sometime during the week, it’s a little bit slower, but during the weekend, there are people and they wanna get out.”

Like food stores, retail stores also attract customers based on the season, temperature and atmosphere. While the items being sold may not be used immediately, such as a cup of ice cream, business is still affected by weather, retailers say.

At Hamptonite N.Y. on Elm Street, Manager Kristi Kerslake said that people prefer not to go on a shopping excursion in poor weather. 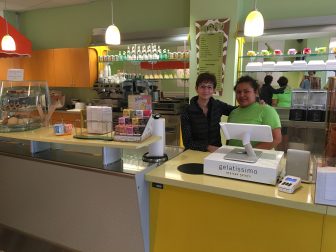 Nuccia Mazzonetto and Jeimy work side by side at Gelatissimo. Credit: Sam Stoner

Tucker Murphy, executive director of the New Canaan Chamber of Commerce, said that unseasonable weather sometimes discourages people from getting out and walking around town.

“But everybody knows that this is just a little anomaly, and the sun will come out tomorrow,” Murphy said. “We know good weather is coming. It’s just an unusual period of time.”

According to the National Weather Service, Memorial Day Weekend for those who stayed in the New Canaan area consisted of overcast, light drizzle, fog/mist, rain and clouds. This week, Thursday and Friday will be sunny, but over the weekend, it will again be rainy with chances of thunderstorms.