A New Canaan couple involved with historic preservation on Wednesday announced that it has entered into a contract to purchase the 1735-built farmhouse on Ferris Hill Road that had been slated for demolition this week. 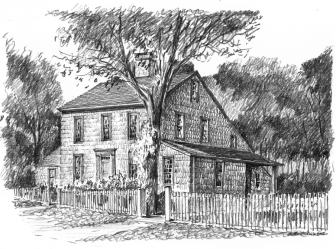 Emily and Tom Nissley “will hold the title while a preservation easement is placed on the property with the help of the Connecticut Trust for Historic Preservation,” according to an email that Tom Nissley sent Wednesday to the local press corps.

“It is anticipated that the house will be rented as soon as possible and will also be placed on the market for sale to a buyer who appreciates the historic value to the town of New Canaan,” Nissley said. 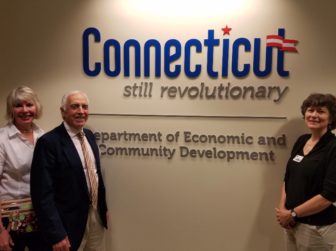 L-R: Susan Serven, Tom Nissley and Rose Scott Long of the 8 Ferris Hill Group, in Hartford on June 1, 2016, the day the historic home at that address was spared the wrecking ball. Contributed

The development marks a positive bookend to a very busy three months for preservationists, who quickly mobilized when the 2.14-acre property’s owner in March filed an application with the New Canaan Building Department to demolish the saltbox structure, following more than one year of unhappy ownership.

That owner, Max Abel, joined in a petition Wednesday to the state Historic Preservation Office to have the home at 8 Ferris Hill Road listed on the State Register of Historic Places, according to Nissley. The designation was granted in Hartford the same day, he said.

“A large group of persons from different preservation organizations, including members of the Historical Society, of the New Canaan Preservation Alliance, some members of the Daughters of the American Revolution, and of the Land Trust, have worked together to raise awareness of the opportunity to save the house as a cultural landmark in New Canaan,” Nissley said. “They will continue to care for the house and the direction that it takes as it is placed back on the market.”

The question of who would hold title on the property emerged as a major hurdle for a group of local preservationists, including Nissley, who mobilized quickly when the application to demolish came into the town, and vowed to find a way to acquire the property.

Abel had acquired the property in November 2013 for $1,250,000 with the thought of building a second home on the lot. It’s a purchase he later said he regretted, thinking at the time that neighbors would support the development of the lot as he had envisioned.

The month after he purchased the property, Abel filed an application with the Planning & Zoning Commission for a special permit that would allow the antique home to remain as an accessory structure so that he could build a new house on the property (the combined square footage would go over coverage). Though Abel worked with preservationists and made some concessions in his development plan, several neighbors objected to its specifics, citing safety and aesthetic concerns, and in some cases requesting that P&Z impose requirements regarding the preservation of the antique, according to P&Z meeting minutes from January and February 2014.

Abel said the story of 8 Ferris Hill is a perfect example of advocates springing to action when they realize they’re about to lose something important to them.

“In record time, the town preservationist community organized a campaign to save 8 Ferris Hill,” he said. “In the face of an almost impossible deadline, they pulled it together. I doubt if such a success can be replicated anywhere else. Where else on this planet can you find such an amazing group of activists with so much commitment and dedication?”

Abel gave thanks to all the New Canaanites who contributed to the effort “and a very special thank you to Emily and Tom Nissley who opened their hearts and wallet to make a critical difference.”

“Ultimately, the true winner is the house itself,” he said. “It will keep standing proud in the heart of town for all to appreciate.”

Several residents spoke eloquently about the historic and architectural importance of the home, convincing a local committee to delay the demolition by 90 days, as allowed by law. Abel himself called for preservationists to step up if they really wanted to acquire the property.

An application that went into the Connecticut Commission on Culture and Tourism to include the home on the CT State Register of Historic Places called it significant “for its contribution to the settlement of New Canaan, Connecticut.”

The application continues: “According to a history written in 1947, the land upon which the home stands was a portion of a large division belonging to the sons and nephews of Joseph Hoyt,” the application said. “This tract included approximately all of the Canoe Hill road from where it leaves Carter Street, East, West, and North into Laurel Road.