The Board of Selectmen on Monday voted unanimously to remove Kiwanis Park from a lease held by a local business that’s been operating the food concession at the Old Norwalk Road facility in recent summers.

It wasn’t immediately clear why the selectmen made the change.

Williams said at the special meeting, “My understanding is that this is because there is no business there.”

Moynihan said that Aziz “didn’t feel it was worthy of his efforts because of the low amount of business.”

“But there is some discussion about possibly some other vendors,” Moynihan said during the meeting, held at Town Hall, referring to discussions within the Parks & Recreation Commission. (Apple Cart will continue to operate at the seasonal Mead Park Lodge.)

A town committee two years ago in reviewing and making recommendations on the future use of publicly owned buildings in New Canaan Recent noted that “improvements to [Kiwanis] Park have provided significant upgrades to the swimming area, beach, and playground. Ongoing maintenance is needed and greater awareness of the facilities, particularly to young families, is warranted to increase utilization.”

The selectmen’s move comes months after Kiwanis emerged as one frontrunner in the Commission’s study of possible open-air ice rink in New Canaan. 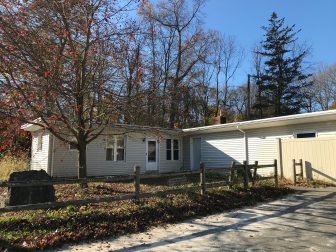 It also follows a flurry of legal activity that revolves around a residence located within the park. According to the committee’s report, the two-bedroom apartment located within Kiwanis Park was being rented by a Parks Department employee paying $800 per month to the town, and who also paid utilities, as per a lease that dates to 2012.

A legal bill issued Sept. 9 by Berchem Moses PC, the town’s counsel, notes multiple phone calls and “interoffice conferences” with Public Works and Human Resources officials, as well as the first selectman, regarding the “Kiwanis Park Residence,” as well as “legal research and analysis” and a review of “questions regarding tenants rights and asbestos.”

In response to NewCanaanite.com‘s public records request for associated documentation, town officials provided a copy of the lease and said that “interoffice conferences are meetings that took place between attorneys at Berchem Moses” and that “legal research, review and analysis are done internally at Berchem Moses and the email correspondence requested is exempted by attorney-client privilege.”