Now that she’s been vaccinated against COVID-19 virus, Rose La Viola has started doing her own shopping again. 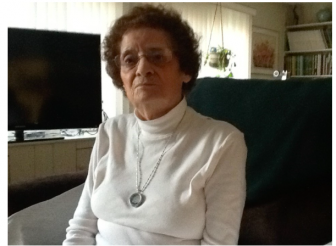 She drives herself—always accompanied and at times of light traffic—doesn’t own a walker or cane, and prefers to take the stairs up and down from her quarters at Schoolhouse Apartments on South Avenue, shunning the elevator.

She’s one of the senior living facility’s most active, social residents, an avid ballroom dancer who participates in multiple activities, according to Administrator Tatiana DeJesus.

And on Friday, she turns 100—a milestone that those close to La Viola are preparing to celebrate even as they admit the number itself belies her vitality.

“It’s so amazing,” her daughter, Tina Gardner, told NewCanaanite.com. “I can’t really comprehend that she’s 100 because she is such active person that she does not give you that impression. I remember going to the doctor with her in the last couple of years and the guy looked at the number and he didn’t believe it was the right person.”

Born Jan. 15, 1921 in Sheepshead Bay, N.Y., La Viola grew up on her family’s vegetable farm. She married her husband Michael, a U.S. Army veteran of World War II, when he returned from Europe, and the couple moved to New Canaan in 1948, settling on Summer Street. Michael La Viola went on to run the Chevron station near Center School (now C&H Auto) with his brother, Gardner said, while Rose joined the Women’s Auxiliary of the local Veterans of Foreign Wars and became a fixture working the polls on Election Day.

Gardner, 73, who shares her mom’s Jan. 15 birthday, herself went on to serve for more than 20 years as a registrar of voters in Wilton, where she lives—a career she attributes to Rose’s influence.

Grandmother to Hope and Michael and great-grandmother to Kalina, Rose La Viola has always been family-oriented, Gardner said.

Asked what the past year of the COVID-19 pandemic has been like, she said, “It’s been difficult.”

“They really sheltered-in-place there,” Gardner said of Schoolhouse Apartments. “It’s hard when you don’t get to do the little things you like to do.”

What she likes doing staying active in the Schoolhouse community and minding small but important details, DeJesus said.

“She is always participating,” she said. “Before the pandemic—because now activities are on the low end with that—she used to always try to help us in any possible way. For example, for me she distributes the flyers when we have memos from the RSC [Resident Service Coordinator] to let residents know anything that is happening. Any activities, she would go to the community room and help the RSC with putting everything on the plates and getting stuff ready. Snacks are brought in but they need to be placed nicely, everything is properly done with Rose. She has always been very helpful, with a very nice attitude and we love her very much. She is so much appreciated.”

DeJesus said La Viola is “as agile as a 25-year-old lady.”

Plans are in the works to have New Canaan emergency responders including police, fire and medical services recognize LaViola this week in a special way, DeJesus said.

Michael and Rose La Viola sold their home on Summer Street in the early-1980s and moved around until settling in the early-1990s at Schoolhouse Apartments after it opened, Gardner said. He died Jan. 3, 2002.

DeJesus said she finds herself telling La Viola that she’s “one of the youngest people I know.”

“I tell her, you look amazing and you are amazing,” DeJesus said. “I don’t have words to describe it.”

5 thoughts on “‘She Does Not Give You That Impression’: New Canaan’s Rose La Viola To Turn 100 Friday”