Though Michael Patrona first was diagnosed with kidney disease 15 years ago, he’s always hoped that it would require only medication to treat into his old age.

He needed a transplant, and faced the prospect of undergoing dialysis until a live kidney could be found. 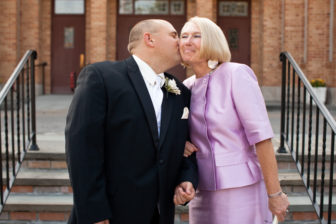 But as soon as she learned that her son needed a kidney, Patrona’s mom, Eileen Hynes, got tested, discovered she was a match and signed up to donate her organ.

“It’s kind of surreal,” Patrona, 40, said on a recent morning, days after coming out of successful kidney transplant surgery at Yale-New Haven Hospital.

“My mom is definitely a huge hero to me. She made a big sacrifice in giving up one of her body parts. I really feel like she has given me life twice, because with a kidney transplant, my day-to-day activities can pretty much resume. If I had to go on dialysis, it would have been a much harder road.” 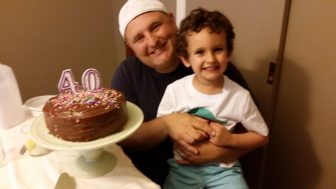 He described his mom as a “selfless person” who would “do anything for her family.”

“She didn’t think twice about getting tested for a kidney,” said Patrona, who lives in Fairfield with his wife, Carla, and their 4-year-old son, William. “She knew that’s what she wanted to do. She’s just unbelievable, not only as a mother but as a person.”

Hynes, 66, a Stamford resident and former New Canaanite who is retired from a career raising three kids and doing secretarial work across multiple office jobs (remarried, she also has three stepchildren), said “there were kind of no thoughts at all” about giving a kidney to her son. 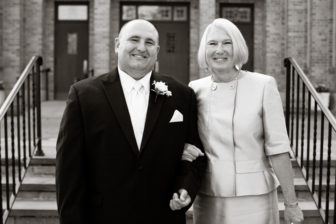 “We all knew this was coming, we all knew he had just one kidney and it was a matter of time before they would say, ‘It’s time,’ ” she said. “So when he called and said, ‘Mom it’s time,’ I just said, ‘OK let me be the first to be tested.’ Because he has a brother and a sister that probably would have tested as well, but they’re both young and they both have young families and I just didn’t want that to happen. So we went in for the testing, and that was that. There was no decision.”

She continued: “You know it’s funny, they make you talk to a psychologist, and say, ‘Well when did you make this decision to actually do this?’ and I said, ‘There was no decision, he’s my son.’ And they said, ‘OK.’ I knew for a very long time that it would come to be one day, and it’s here now. And he’s doing very well and I’m doing well and so this may have a very happy ending and nothing could be better than that.”

Hynes added: “I feel as though he is part of me, always has been, and now he has a little bit more of me than he had before.”

Patrona, who has become an advocate for kidney donation, said he’s hoping to live for another 20 years with his mom’s kidney, at which time he likely would need another transplant. Hynes said she is hopeful that medicine will have advanced enough by then that a synthetic substitute is available.

For Hynes, selflessness is a character trait ingrained in her family, and something she’s tried to pass along to her children.

Asked to describe her son, Hynes said: “He is a very gentle type of person, a teddy bear kind of man. Very loving, very giving. I hope that most of our family is that way and that’s just the way we are—altruistic rather than in it for ourselves. He is the kind of man that I was hoping he would turn out to be. I’m very proud of him and I love him.”

It’s been an uphill battle at times for Patrona, a 1994 New Canaan High School graduate who went on to earn a bachelor’s degree in education from West Chester University in West Chester, Penn., and has worked for the district back in his hometown for 17 years. Patrona was just nine years old when his parents divorced, Hynes recalled.

“And he kind of thought that he was the man of the family and he had to take care of his brother and sister, as well as me, so he worked very hard,” she recalled. “He worked hard at school. He helped me when I had to go back to work, making sure everybody was in the house and everything was calm and cool. As he got older, he was always just very helpful. As his brother and sister turned teenagers and needed rides here and there and I couldn’t do everything on my own—always helpful to his family. And I think [he is] very helpful to the families he teaches with, as well.”

On medical leave from the district now, Patrona—a longtime figure in New Canaan baseball who serves as scorekeeper for the NCHS varsity team and runs the local teams that play American Legion ball in the summer—said he is hoping to return to Saxe in the spring.

“I’m feeling great,” he said. “I am more awake, more energized. The only thing that hurts on me is the side where the incision is.”

Though his kidneys will never function perfectly, and heavy doses of medication are a fact of life for Patrona, he said that, with luck, life will return to normal soon. Patrona said he will be “immuno-suppressed” for the rest of lis life, and should know with certainty within three or four months that the kidney transplant took successfully.

According to the federal Centers of Disease Control and Prevention, one out of 10 adults suffers with chronic kidney disease, a condition in which kidneys are damaged and cannot filter blood as well as healthy kidneys, meaning waste from the blood may remain in the body and cause other problems. Most people who suffer from the disease don’t know it, and must undergo specific blood and urine tests to find out, the CDC said.

Hynes with a single kidney is expected to live a perfectly normal life, as though she still had two, Patrona said.

Hynes said that what makes her happiest is that her son didn’t have to go on dialysis.

“And it was to his advantage that it was a family member who gave it to him,” she said.

9 thoughts on “‘She Has Given Me Life Twice’: New Canaan Schoolteacher’s Mom Donates Kidney To Her Son”