That day for Elizabeth Jansen began in New Canaan as she and her mom, Peggy, packed up the car and left their house on Silver Ridge Road to drive down to the University of Richmond where Jansen would move into the apartment where she’d live for her senior year. After dinner with her mom, grandmother and aunt that evening, Jansen came back to her place set to relax and unwind with her three roommates and a few friends that she hadn’t seen all summer.

At about 10 p.m., Jansen received a text from an unknown number. It read, “Hi, Elizabeth. It’s Greg. Call me ASAP.” Greg Fisher was someone Jansen knew as a friend of her older brother, Robert.

Robert lived in Denver, Col., at the time and that day was hiking Snowmass Peak in Aspen, with Fisher and three other friends. However, Fisher was not someone Jansen had ever interacted with before. So with that, and the urgent tone of the text, she knew immediately that something was up.

“Why would he get in touch with me unless it was something serious?” Jansen told NewCanaanite.com on a recent evening when recalling that unnerving moment. “So I called him and the first thing I asked was, ‘Is Robert okay?’ And Fisher’s reply was ‘No. We were hiking and were coming down the mountain and he took a misstep and fell—he didn’t make it.’ ” 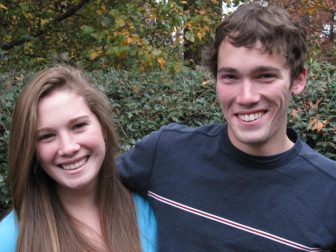 Robert Jansen, a 2007 graduate of New Canaan High School, who in his sister’s words was “a gentleman, funny and very supportive,” was 24 years old. Instantly after hearing of Robert’s passing, Jansen felt shock and denial set in.

“Those words felt very empty to me,” she recalled. “How could they be true? No, Robert was fine. But really, I just felt like I wasn’t even present in my body anymore. I remember very little of the moments that followed.”

That feeling of emptiness persisted in Jansen for the months that followed. While ultimately deciding to return to Richmond for her senior year, there was no shortage of days where she was looking for something, anything to fill the void of the loss of her brother.

For a while, the way Jansen felt most comfortable dealing with her grief was when she was eating.

“I turned to food because I didn’t really want to talk to anybody about Robert. My schoolwork and job kept me busy and focused, but the free time I had I filled with eating—food and I have a very difficult relationship.”

Prior to June 2013, Jansen never fancied herself a runner. Despite being on the track team all four years at New Canaan High School, as well as multiple seasons spent running both cross country and indoor track, Jansen categorizes all those as “extracurricular activities.”

“I was in no way a runner back then,” Jansen said with a smile. “I liked running in high school but I was by no means focused on qualifying for FCIAC’s or states or concerned with any of my times.”

That mindset followed her to college where Jansen would “barely” be able to run three miles on the treadmill at the gym. And when a close friend of hers, Katie Sears-Snoberger, suggested that she join her and other friends of theirs to run a 10K during their sophomore year, Jansen’s response included laughter and a very firm “no way.”

But that all began to change in June 2013. It was then when Jansen and dozens of family members and friends were at the Leadville Trail Marathon in Leadville, Col. They were so to honor the memory of Robert who, just one year prior, months before his untimely death, ran the course for his marathon debut with a time of four hours and 48 minutes, finishing 33rd overall. 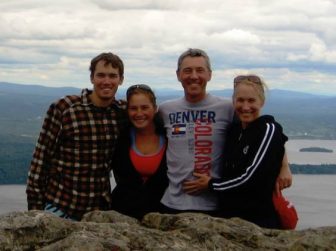 An impressive feat made even more so when taking in to account that the Leadville Marathon is deemed the second-hardest marathon in the country—primarily because of its extremely high elevation levels (the race starts at 10,300 feet above sea level and peaks at 16,633 feet) and the course’s unforgiving terrain (rocky spots, constant climbs up its mountains and paths as well as whipping winds).

Much of the Jansen group there that day partook in the Leadville Trail Heavy Half-Marathon, which is actually longer than your typical half-marathon, with a distance of 15.5 miles. Jansen had her heart set on walking the entire course as she wore long pants and a fanny pack while carrying a digital camera. But her body had other ideas.

“I had no intention of running,” Jansen said. “But during a few of the downhill parts, I started to. Then there were a few of the flat portions where I ran as well. And I remember leaving Leadville that year feeling like while the race was really hard, that I wanted to go back the next year and improve my time.”

In August 2013, Jansen ran her first official half-marathon in Boston just to prove that she could. Her time? Two hours and 21 minutes. She ran that race with an uncle of hers, though, who recorded a time of one hour and 53 minutes. So while Jansen was encouraged by the fact that she finished, having someone she knew run 28 minutes faster than her had her believing that she would never be able to accomplish such a time herself.

Jansen ran one more race that fall, then participated in the Leadville Heavy half-marathon again in June 2014, but had yet to take running seriously. That all would change with the arrival of 2015.

Like many others do every year, Jansen made a New Year’s resolution that year to lose weight. A goal of hers to inspire and give purpose for her to do so was that she wanted to be back in Leadville in June—but this time to run the full marathon. 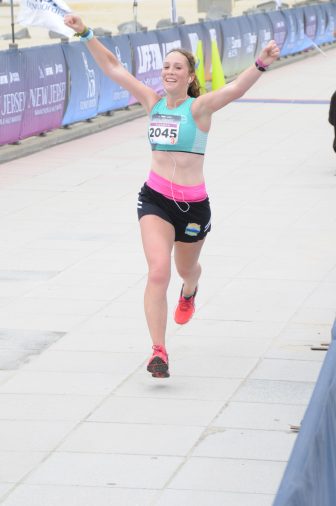 “I contacted a friend of Robert’s in Colorado, Siobhan Pritchard, who’s an ultra-marathoner herself and told her that I wanted to do Leadville in June. She went, ‘OK. Sign up right now and we’ll do it.’ She’s now my running coach. I made a weight loss Instagram account which I’m still rather active on; I went to classes at the gym; put my workout stats and running videos on the [Instagram] account. My resolution was to lose weight, run the Leadville Trail marathon and get serious about running—and I did!”

After more than two years of trying to find something positive to fill that emptiness inside her after Robert’s passing, it was becoming evident that running was going to be exactly that.

Jansen ran the Leadville Trail marathon that year in 7 hours and 39 minutes—and by the time that summer ended, had lost 25 lbs. It all was a recipe that put her on the path to participate in more marathons and improve both herself and her times.

She has since raced six more marathons including four road races in Charlotte, Providence, Oceanport, N.J., and Richmond, and two more occasions in Leadville. None more special than her Leadville race in 2016.

Jansen was only able to improve her time from the previous year’s race by two minutes, admittedly due to a lack of drinking fluids and eating that day to maintain her strength for the treacherous course. So her time was not all that memorable.

Rather, it was who was waiting for her at the finish line.

Kyle Amell, Jansen’s boyfriend of four years at the time, had gone with the Jansens and their large support group to Leadville for Jansen’s debut marathon in 2015. It didn’t take long for Amell to notice the significance this race had for his girlfriend and those close to her. So in 2016, Amell joined them all again and took part in the Heavy Half-Marathon while Jansen raced the full one.

Due to the shorter distance, Amell finished a couple hours before Jansen and then had a family friend mountain bike up the course to spot and track her progress. When Jansen crossed the finish line, she was barely able to stand or talk. Then after receiving her medal for finishing the race, she was met by Amell, down on one knee. 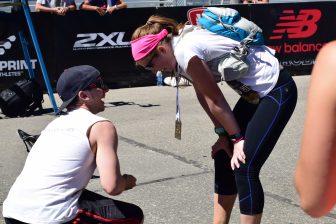 The finish line of the Leadville Trail Marathon in 2016. Kyle Amell proposed right after Jansen received her medal for finishing the race. Contributed: Elizabeth Jansen

“He congratulated me and then he proposed. So I’m all hunched over and he goes, ‘Are you going to say anything?’ And I remember just nodding my head and then finally being able to get a yes to come out. I was, obviously, overjoyed yet so out of it at the same time. It was the perfect spot for such a moment to take place. If I could’ve chosen anywhere to get engaged, Leadville would be the spot. It ties in all the things I love while also tying Robert in too. I was elated when that happened.”

Today, Jansen’s focus is set on qualifying for next year’s Boston Marathon. A resident of Boston where she and her now-fiancée Amell live together, the marathon holds a certain significance for her.

“Boston’s [marathon] is a city-wide holiday. Nobody works, everyone lines the streets to cheer on the runners. While there are other prevalent ones like New York or Chicago, in Boston that day is all about the marathon.”

To have the best chance at qualifying, Jansen needs to record a time of three hours and 32 minutes or better in her next marathon—the Beantown Marathon held in Hingham, Mass. She will enter the race with a personal record (PR) of 3:48:23, set in the New Jersey Marathon this past April.

While knocking off 16 minutes of her time may seem like a daunting task to some, Jansen is ready to face the challenge that qualifying is head on.

“Over the months and years that I’ve done this, I’ve continued to pursue things that challenge me no matter how difficult they may seem. So while Boston is tough to qualify, I’ve said to myself that with all the work and effort I’ve put in to get to this point, that I can do this!”

Whether Jansen qualifies for next year’s Boston Marathon or not, one thing is clear—her running journey will not end there. Jansen already plans on racing another marathon this fall that would be used towards qualifying for the 2019 Boston Marathon. There’s also a race back in Leadville that’s called the Leadville Silver Rush 50—a 50-mile race—that Jansen would like to participate in. Jansen will also strive towards attaining a marathon PR of three hours and 20 minutes, or even faster if she can help it.

And these are all goals for her because any time she goes out for a run—whether it’s around the neighborhood or in a marathon—it keeps her closest to Robert as the five-year anniversary of his passing approaches.

And while Jansen’s now 13,000 followers on her Instagram account would suggest that she’s helped plenty of people with her story (as have they for her as well), she would admit that her journey has, as much as anything else, helped realize the strength and potential she has in herself.

“I’m so much stronger than I thought I was. Senior year of college, when I could barely get through three miles on the treadmill and was overweight and genuinely not happy—I would’ve never thought I could do what I’ve done. Running is excruciatingly painful. It’s both very physically and mentally draining. But it’s truly my passion. And similar to dealing with a death, you can get through it. I think that’s another reason why I love running—dealing with Robert’s death was physically and mentally painful too. But, it my own way, I persevered. You just have to believe in yourself.”

For more on Jansen’s journey, please visit her blog and website: runningforrobert.com