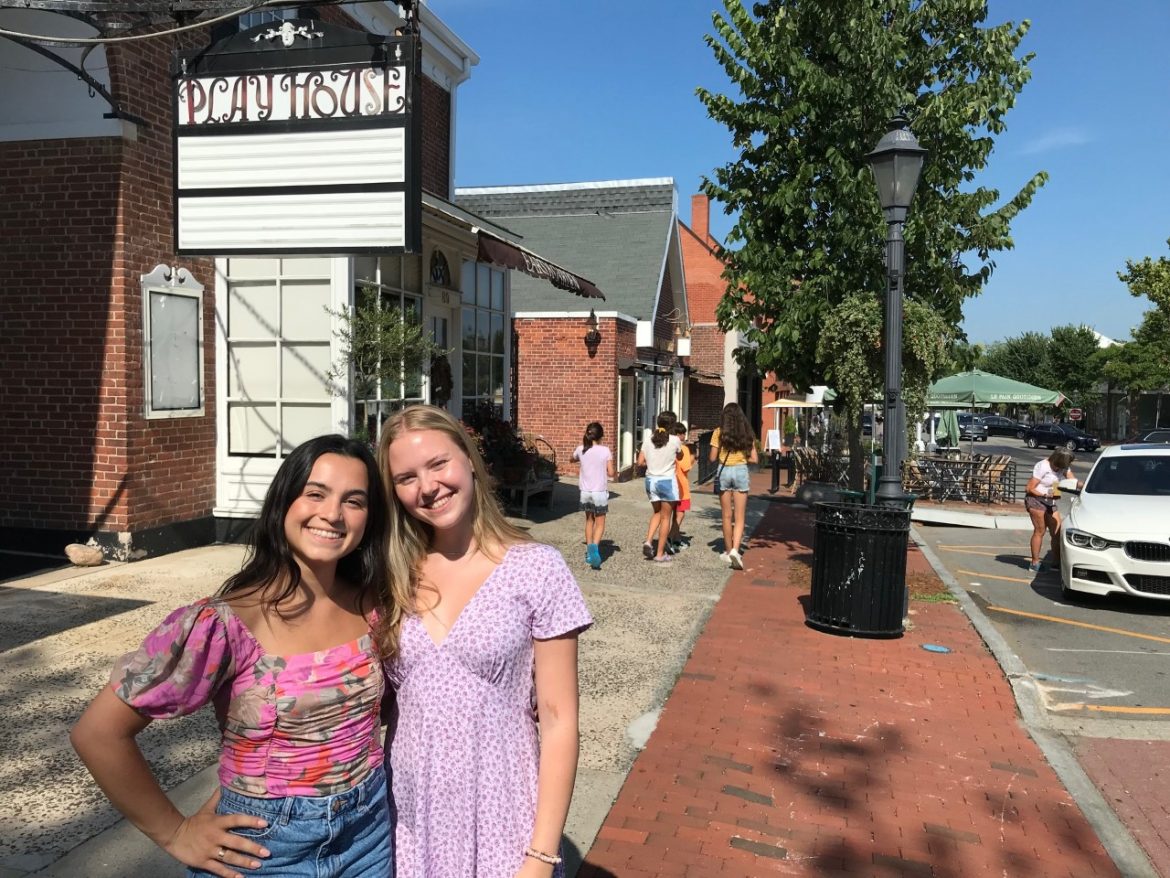 Mariana Ferreria, a recent New Canaan High School graduate who earned a bachelor’s degree this year from Boston College, had been looking last winter for “a side passion project” before going to Spain later this summer as a Fullbright scholar.

Ferreira approached Robin Bates Mason of Planet New Canaan, who connected her with 2022 NCHS graduate izzy Kaufman. Kaufman had already launched a composting program at Greenology, where she worked.

“I had Izzy explain what she did at Greenology and I was like, ‘That’s crazy because I was thinking of doing the exact same thing for other restaurants in town,’ ” Ferreira recalled. “So we decided it was perfect partnership and from there we started designing what ‘NC FWRD’ is now.”

Short for “New Canaan Food Waste Recovery & Diversion,” NC FWRD is pilot program designed to fully fund and support restaurants that are interested in diverting their food waste. It includes technical support and funding to divert food waste so that it goes to compost rather than landfills and incinerators.

With limited guidance from Bates Mason and Katie Owsley at Planet New Canaan, they secured a $3,600 grant from the New England Grassroots Fund.

The program is about more than just composting—NC FWRD is designed to connect local restaurants with waste experts who consult on how to organize inventory in order to waste the least amount of food (Center for EcoTechnology), including an audit that could yield recommendations for menus and portions—“There’s a way to reduce food waste before you even get scraps,” Kaufman said—ensuring that unused food is made available to the food-insecure (Food Rescue US) and ensuring that food scraps go into a separate bin for pickup and hauling for compost (Curbside Compost).

In the presentation they designed—itself a new skill, along with organizing and running meetings with business owners, Kaufman said—they note that about one-third of all food produced gets thrown out each year, that rotting food generates about 3.3 billion tons of greenhouse gases annually, that the United States generates the second-highest weight of food waste in the world, and that 84% of U.S. restaurant food waste ends up in landfills. It’s a waste, because food can not only help feed people and animals, but also generate power and enhance the natural environment, they say. (Locally, some successful efforts include Walter Stewart’s Market, which diverted 107,000 pounds of food in its first year of diverting food waste, and the town, which diverts 13,000 pounds of food waste per month, including at the Transfer Station.) 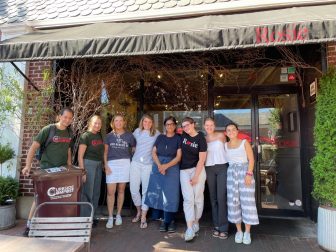 Members of the staff at Rosie, with Rosie Bonura herself fifth from left, with Planet New Canaan representatives.

Ferreira and Kaufman recently had an introductory meeting with Rose Bonura and the staff at her popular Elm Street restaurant, Rosie. Bonura said she’s “really excited” about her business’s future in composting through NC FWRD.

“I’m definitely into it,” Bonura said.

Asked whether she planned to continue with the program past a pilot stage, she said, “Absolutely. It’s really simple, because when you think about it, the food scraps that Nick [at Curbside Compost] is talking about is a wide range—you don’t have to be so careful about separating things. My restaurant, I tend to give larger portions and things come back and it kills me. I feel like, ‘Ah, we could be doing something composting this.’ I think it’s really going to be easy. We just need the bins which he’s going to supply and then take to his facility.”

Asked about a vision for NC FWRD, Ferreira said, “We are happy with one restaurant. We are happy with two. If more, that’s amazing. But there’s a couple of other goals that we have that are not necessarily ‘every restaurant in New Canaan should be composting’—while that’s the dream, there are other things happening that are moving forward.”

Those include starting the youth board on Planet New Canaan.

Kaufman noted, “It was for adults before and we were the two youngest members.”

Now, there are seven high school students who are serving on the youth board, which will serve as a way to connect environmentally minded NCHS clubs with a group that has funds, knowledge of grant funding and connections to both town government and local businesses, they said.

“So we’ve envisioned this board to connect those students who are really passionate with a group of adults to actually help them achieve their goals,” Ferreira said. “So if this project stays with Rosie or continues to grow, one impact it had is showing that youth in New Canaan actually can create change and follow through on goals that they have. It’s not as daunting and scary as it looks if you’re just connected to the right people.”

Bates Mason said that Kaufman and Ferreira “are absolutely amazing. “

“They have done so much work for NC FWRD and though Planet New Canaan is involved, I cannot express enough that they have done all the work,” she said. “New England Grass Roots Fund believed enough in their project that they received a grant for just under $4,000. Izzy is off to Syracuse and Mariana is off to graduate school in Spain and I would like to say that they will do great things in the future, which they will, but they are already doing great things.  We—Planet New Canaan—are really going to miss them.”

Bates Mason also noted that “Izzy needed absolutely zero help from Planet New Canaan, she already had it all set up” at Greenology. There, she created a comprehensive daily composting program, earning high praise from the business’s owner.

Even so, Kaufman said, she’s “had a lot of people question why I was even trying to organize the compost at Greenology.”

“They were like, ‘Why would you do such a thing?’ ” she said. “And it was the idea that something small can create something bigger. And even though this isn’t really huge, it’s still a step forward. Even if it’s a few more restaurants, it’s the start to something a lot bigger.”

Ferreira said one other major goal of NC FWRD is to “help educate people a little bit that the things you use have a life after you throw them out.”

“A lot of us, you know, you throw it in the trash and then the trash gets taken away and its’ gone forever,” she said. “But there’s so much more behind that. I’m hoping that even if it’s just a couple of restaurants, even if it’s just a couple of customers, people can start thinking, ‘Oh, why am I throwing away this food that can be turned into something of value and something that can help the Earth?’ ”