Even with a strong opening and positive reviews from locals, the owners of New Canaan’s new Italian restaurant on Main Street say they’ve taken in early feedback regarding food and overall dining experience, and have made several changes. 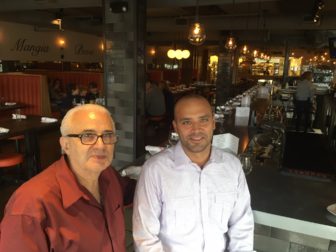 Complaints about high levels of noise led Spiga to reinstall soundboards in the ceiling at 136 Main St., and cushions have been added to seats at the row of tables up the middle of the restaurant, according to owner Dan Camporeale.

“We wanted to put out a different type of brunch,” Camporeale said. “Everybody does bottomless Mimosas and Bloody Mary’s. We’re doing things like an artichoke bottom stuffed with crab meat and a fried egg on top. Banana caramel-stuffed French toast, as well as smoothies and parfaits.”

The 131-seat restaurant opened Aug. 9, during New Canaan’s quietest time of year, in order to give Spiga a chance to figure out its staffing and operations, Camporeale said. Diners and patrons of Spiga’s bar have passed along feedback anecdotally—something Camporeale said is rare in the business and deeply appreciated by the restaurant’s owners.

“I would say ‘Thank you’ to New Canaan for the feedback, and please keep bringing us all advice, comments and constructive criticism,” he said. “It helps us and helps them.”

“We’ve opened in other towns where people have not been so generous with their comments. They might just say, ‘I’ll never come back.’ Whereas here, I really think that people want us to succeed and see it do well, so that they have another place to put into their repertoire of where they go weekly.”

The noise levels during busy nights were among the early complaints from patrons, Camporeale said. Soundboards had been in place for the predecessor restaurant in the space, Barolo, but Spiga removed them thinking that the sheetrock there would be enough to absorb noise.

“But the response from the town was, ‘It’s too loud,’ ” Camporeale recalled. “And it was a similar issue with the seats. They’re cushioned now because people had been saying they were uncomfortable.”

“We’ve had complaints on food, at times, too—and we are always trying to get the food perfect. We will never get it perfect but we are always trying to. There will be days when someone doesn’t like something, and that could just be personal preference, or it could be somebody put too much salt in something. The big message I have for New Canaan is ‘thank you’ and keep it coming.”