The sound of jump ropes cracking in succession echoes across the meadow where New Canaan High School meets Waveny. 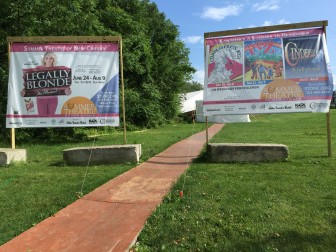 The walkway from the parking lot by Dunning Field at New Canaan High School to the Summer Theatre of New Canaan tent. Credit: RJ Scofield

But this is no school fitness program—it’s group of seasoned actors from Connecticut and New York, practicing the choreography for the musical number “Whipped Into Shape” from the upcoming Summer Theatre of New Canaan performance of “Legally Blonde—the Musical.”

“It’s all really coming together,” Ed Libonati, executive director of STONC, said with a smile as he stands near the makeshift tent and stage that for 12 summers has transformed this bit of wilderness into a highly touted entertainment venue. 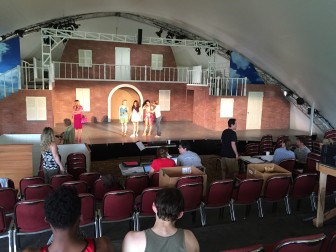 Established by Ed and Melody Libonati, a New Canaan husband and wife who moved from New York 27 years ago and sought to bring a thriving performing arts scene to both the town and county, STONC is a nonprofit organization with a highly personal history for the family, and it’s become as integral a part of the summer scene as the water towers that loom over this landscape.

Libonati, who holds many TV and theater directing credits, does not just work in theater but lives it—something his home life reflects. Melody herself has a number of Broadway credits to her name, including playing Sandra in the original company production of “Grease.” Their daughter, Allegra, is resident director of the American Repertory Theater in Cambridge, Mass., and son Christian, runs a theater company in Chicago.

Both are working alongside their parents this summer at STONC.

“It was [Melody’s] vision and her dream to make this happen,” Libonati said. “And then she put a board together of educators, businessmen, merchants, and politicians to determine if this is going to happen. We worked to put together our first show and it was a success, so we never looked back.”

That first production was Rodgers and Hammerstein’s “Cinderella,” which much like its heroine was a modest start for something with a ton of potential: That production saw 50 people audition, this year saw 750.

STONC’s productions are unique in that they take place beneath an open-air tent that covers the 60-foot stage and seats 300 seats. This includes regular chairs and picnic tables that can be reserved for groups. The tent was purchased in 2008, when STONC performed “Taming of the Shrew” and “Camelot” beneath it, later making it their “permanent” home after some modifications.

“There’s no obstruction, so everywhere is a perfect view. This particular kind of tent, a saddle tent, the acoustics are fabulous, so voices and instruments can be heard very well,” Libonati said. “It’s quite a professional rig … probably one of the biggest stages in Connecticut.”

The tent allows warm gusts of summer wind and other such seasonal novelties for those in attendance, even breezes from the occasional rainstorm.

“That’s actually my favorite. I love it when it rains [during a show],” said Katie Oxman, as she crafted props for the upcoming production of “Wizard of Oz.” “There are not a lot of places where you can see a show outside when it starts to rain and not need to run for cover. Either [the tent] is cozy because of the stars or the rain.”

Oxman, 23, lives in Pittsburg with a musical theater degree, and has been involved in STONC nearly every summer for 10 years.

“This company is really good at manufacturing magic, and there is something already magical about being in a giant tent, under stars or under rain, and then seeing a full-scale Broadway level production, and then also a super magical kids show,” she said. “You’d be surprised what they can do under a tent.”

Oxman is also choreographing “Wizard of Oz” for the second year in a row. She describes herself as “an original New Canaan summer theatre geek.”

“This is my home—not my house—this tent. I know it all so well now that it is just home,” Oxman said. “I grew up near here and I went to New Canaan High School … I was really lucky to have it in my backyard.”

Everyone from actors to stagehands for each production are contracted and paid to ensure accountability, with many working in hands-on internship positions. Many of the actors even have Broadway credits to their name. Libonati finds such measures to be necessary due to the great service a quality theater can do for the community.

“The soul of a community is through its culture and its imagination,” Libonati said. “Theater helps a community and the individual connect with each other. It is a way of communing with each other, a way of sharing a common experience; it is an opportunity for connection, and that is what we feel the Summer Theater bring to New Canaan and its extended community of Fairfield County. It is a chance for people to connect with their community and themselves in a meaningful way.”