Though it had been said that a bank accepted one local couple’s offer on a vacant 1780 home in New Canaan’s historic district, the antique house’s current owners have rejected that offer, officials said.

Members of the Historic District Commission said Wednesday that they’re disappointed the Greek Revival-style home at 4 Main St. will not see the prospective new owners take over. 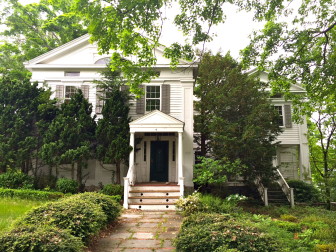 “They were putting some thought into it,” commissioner Richard Rose said at the group’s meeting, held in the ca. 1825 Town House, one of eight museums and historic buildings operated by the venerable New Canaan Historical Society (a member-supported organization). “They were asking good questions.”

Other than making (mostly safety-related) upgrades to the home’s railings, driveway and garage, the prospective new owners had expressed only a desire to restore and care for the home. Commissioners had said in March that it’d been at least one year since anyone lived there.

It isn’t clear what will happen to the 10-room, 7,000-square-foot house now. Commissioners wondered whether it will go back on the market. The local firm said to be handling the property could not immediately be reached for comment.

Tax records show that the home has been owned since 1984 by James Talbot. Respecting the current owners’ privacy, Commission Acting Chair Janet Lindstrom stopped short of giving more information than the fact of the home’s non-sale because those owners rejected an offer.

“I just wanted to update you that this is not going through, because we had thought it was going to—we were very happy,” Lindstrom told the commissioners.

“Keep your eyes and ears open, because I think it’s one of those properties [where] it would be so sad if it went down,” she added.