Anticipating that the question of requiring masks in school could become local even sooner than mid-February, the district this week will reach out to school parents to verify their own families’ vaccination status so that the data is in hand when the time comes to make a local decision, Superintendent of Schools Dr. Bryan Luizzi said Monday.

District officials will draft a plan for the Board of Education’s review that looks at “local data and metrics to make that determination for the district,” Luizzi said during the school board’s regular meeting, held in the Wagner Room at New Canaan High School.

That data will include vaccination rates, percentage of positive cases, number of cases per 100,000 and “longitudinal trends” that indicate “which way the numbers are moving,” Luizzi said during an update to the Board of Ed on COVID-19.

“We are going to be working with our district health advisors and narrow that down and figure out what those ‘cut points’ should be, as we have some experience in the past. To prepare for that, now that the second [COVID-19 vaccine] shot clinic has occurred, we are going to be asking families to indicate their vaccination status for us. So we are going to be sending something around at some point this week where they can upload a vaccination card and let us know. Those responses will be kept secure in the school nurse’s database. And it will be similar to how we house the data for other records that we collect, other vaccination records.”

Luizzi said he himself would have access to information in the aggregate, rather than person-by-person or family-by-family, across the public schools.

“Of course, we have all of our adults, all the staff, so we will get this information for our kids or families,” he said. “We will talk to our medical advisors to work through the fine details of how that looks. But we want to be prepared for the day when it becomes a local decision. We don’t then want to spend weeks trying to get this system in place.”

The comments came as New Canaan Public Schools see a rise in positive cases. At the time of the meeting, Luizzi said that NCPS had 18 students in isolation who had tested positive as well as three staff members. The figures are “up significantly” from one month ago, he said, and could be due to Thanksgiving-related travel and gatherings. All three of the staff members who tested positive are unvaccinated, Luizzi said. The schools also had 42 students in quarantine at the time of the meeting, due to close contact with a positive case.

Gov. Ned Lamont on Sept. 30 extended through Feb. 15 an executive order related to the pandemic that included a requirement to wear mask in school buildings. Luizzi said that local officials “are anticipating that at some point Gov. Lamont will make masking a local issue.”

“We are starting to see the writing on the wall around that a little bit,” he said. “Right now it’s scheduled to be mid-February that the EO [Executive Order] runs out but it may happen before that.”

Board of Ed members asked Luizzi whether Lamont asks superintendents in the state what they want with respect to masking (they tell him in any case), whether New Canaan has seen classroom spread (yes, a number of students tested positive after a teacher did), whether the idea of collecting vaccination records is coming down from the state (not formally, though the idea came out of conversations with the state public health commissioner), whether it would be “additive” for the Board itself to tell the governor or state Department of Public Health what its thinking is with respect to masks (not likely, given how much feedback Lamont already is getting from all sides), whether the Board could get data on whether NCPS positive cases are symptomatic (yes, though that’s self-reported), whether hospitalizations also are self-reported (that data isn’t town-specific, though New Canaan’s medical director has said they’re up at Stamford Hospital), whether the Board of Ed could get more information on the advisors that will be consulted as NCPS drafts its plan (yes), whether teachers who are not vaccinated should be tested twice-weekly instead of once per week (more conversation would need to be had before making that change), and whether data could be gathered on the effect of vaccines not just on the severity of coronavirus disease but also the prevalence of spread (yes). 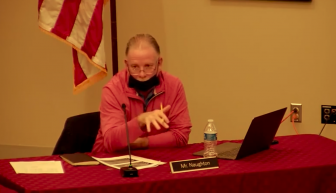 Board of Ed member Bob Naughton said he had concerns about privacy and that though he understood collecting vaccination card data from school employees, that “it’s a different relationship than parents, students.”

Naughton also said it’s “one thing” if state officials are mandating that public school districts collect the data and “voluntarily doing it is different.”

Naughton suggested getting the vaccination data among school families through a survey rather than collecting the records.

Luizzi said, “One of challenges is we are making, really, I think pretty consequential decisions based on these results, and I think it’s important to have faith and trust in the results of the information.”

Naughton responded, “I think people will be truthful if you ask them.”

Board of Ed Secretary Dan Bennett, noting that remarks on vaccination among students had been made during a public comment portion of the meeting, said, “I think there are some concerns from people that want to ensure there is not disparate treatment when it comes to education and educational opportunities and extracurricular opportunities related to vaccine status.”

“I think a lot of people view it as a personal decision among parent, child and their healthcare provider,” Bennett continued. “So I just think as we talk about drafting the policies, I think getting a little more granular an understanding not just what the policy is but how it’s implemented would be helpful and I think hopefully assuage some of the questions and concerns that parents might have.”

He referred to comments made by New Canaan resident Matthew Campbell, who had addressed the Board of Ed at the start of the meeting, saying, “To my knowledge the BOE has ’t issued a vaccine mandate in New Canaan Schools. That is why I was dismayed to learn there are bureaucrats who are trying to create backdoor mandates by arbitrarily forcing students to be vaccinated in order to fully participate in the NCHS experience. I say ‘arbitrarily’ because I sincerely hope they’re not trying to create a ‘class system’ among students, especially considering the correlation between youth vaccination and race and religion. Sadly, the recent guidelines for participation in NCTV do just that. Certainly a news anchor or camera person spends less time unmasked than the thousands of students eating lunch in the cafeteria. This simply makes no sense and is discriminatory. Vaccination is a individual choice, especially with COVID vaccine for children. Anticipating some condescending remarks about science, I pulled the latest data from the CDC website, posted Nov. 22. COVID cases among vaccinated 12- to 17-year-olds is 47.6 per 100,000. COVID deaths among 12- to 17-year-olds is, I quote, ‘not shown due to low numbers.’ The next group up, 18- to 29-year-olds’ deaths are 0.00 per 100,000 and 0.19 per 100,000 for the unvaccinated. What about our teachers? Yes it increases with age, but it’s still 0.39 per 100,0000 vaccinated aged 50 to 64. The data is clear. That is why most European countries decided against COVID mandates for youth. This is an arbitrary mandate and it is discriminatory. Frankly it shows a lack of leadership. A good executive and a good board will gather input and make decisions based on facts, and not outsource these decisions to an unelected bureaucrat.”