The Farmer’s Table has earned perfect or near-perfect marks from health inspectors since it opened on Forest Street in 2010, records show. 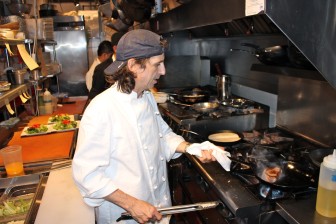 Out of a possible 100 points, the popular restaurant has earned an average of 95.9 through 15 unannounced inspections by sanitarians with the New Canaan Health Department, according to a review of the organization’s files at Town Hall.

In May 2014, chef-owner Robert Ubaldo moved The Farmer’s Table up and across Forest Street, to the larger space it has occupied since, formerly Bistro Bonne Nuit. An expanded menu of Ubaldo’s signature fresh-ingredients items attended the move.

The Farmer’s Table has never scored lower than 92 (article continues below): 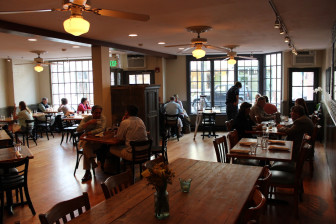 The Farmer’s Table has reopened on Forest Street in a larger space with an open kitchen. Credit: Terry Dinan

Speaking to such high scores generally and not to The Farmer’s Table specifically, Sanitarian Carla DeLucia said it would the establishment is “without any four-point violations, without temperature violations and likely without any critical violations.”

The Farmer’s Table’s minor violations include keeping beverage cans on a floor, not labeling sauces and dressings in clear containers and storing shell eggs on a middle shelf above ready-to-eat items, instead of a bottom shelf.