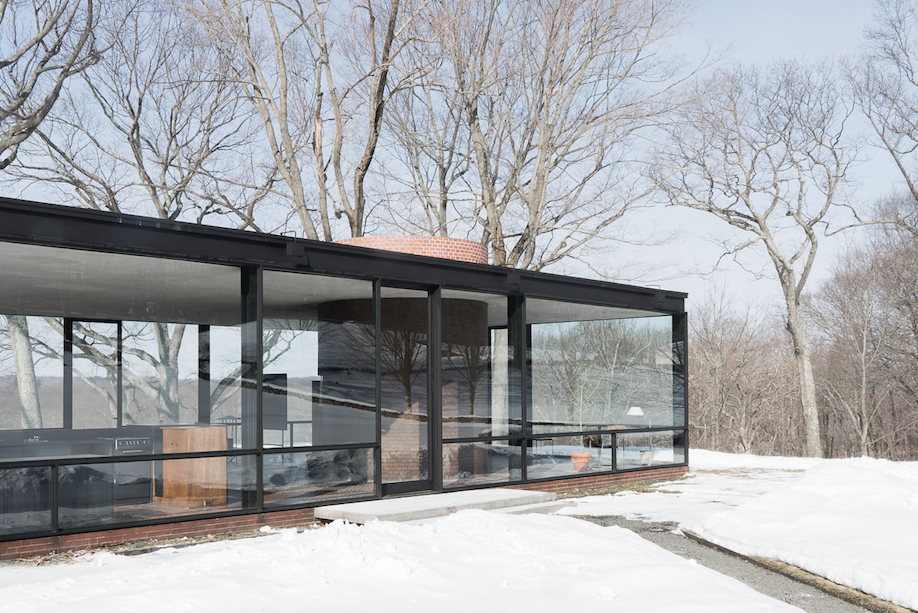 A National Trust for Historic Preservation site on Ponus Ridge that draws architecture enthusiasts and other visitors from around the world is seeking permission from the Planning & Zoning Commission to reopen in a limited way, as per COVID-19 pandemic-related restrictions.

The Glass House in May won P&Z approval to open under similar conditions for a limited period of time, has applied to the Commission for permission to have up to 16 visitors’ cars park at the 49-acre site itself, since the nonprofit organization’s small tour buses wouldn’t allow or social distancing, according to its executive director.

“[T]he Glass House proposes that, for a finite period of time, visitors be allowed to drive to the site,” Greg Sages wrote in a Jan. 27 cover letter to P&Z.

“On-site parking would be limited to 16 cars. Parking at West School is not available this year as in-school learning is in effect. This portion of the protocol requires explicit permission of New Canaan Planning and Zoning as it conflicts with condition 5c of our existing permit which states ‘All visitors shall be transported to The Glass House property by a van designed to carry no more than 20 persons including driver, guides and visitors.’ ”

P&Z is expected to take up the application at its Feb. 23 meeting.

The Glass House is proposing a two-month reopening, after which time the organization will review new guidance from the state as well as “our own internal restrictions.”

It isn’t clear from the application when exactly The Glass House would reopen if P&Z grants approval. According to its website, “the 2021 season is planned to run between April 16 – December 15, 2021.”

Under the proposal, The Glass House would again restrict visitors to the upper 13 acres of its campus, and sell “grounds passes” for specific times and durations that limit visitors to 25 at a time, with no group larger than five individuals.

The on-site parking of visitors’ cars “would be along the upper driveway which is not visible from the neighboring properties,” Sages said in the letter.

“A parking attendant will be provided at either parking location. Appropriate signage indicating safety requirements will be placed at the check-in location at the site. Glass House staff will be stationed to remind visitors about social distancing and that masks are required in the absence of a health issue.”

Under a Dec. 11 update from Connecticut Gov. Ned Lamont on Sector Rules for Reopening, museums, zoos and aquariums can open indoor and outdoor exhibits at 50% capacity.

P&Z voted unanimously in June to allow The Glass House to operate through August with visitors parking both on-site and at the nearby West School parking lot. In August, P&Z voted 4-2 to extend the operational plan through the end of tour season (Dec. 15) and to allow a one-off October wedding at the site.

One of those who voted against the application in August was Commissioner Dick Ward, a Glass House neighbor.