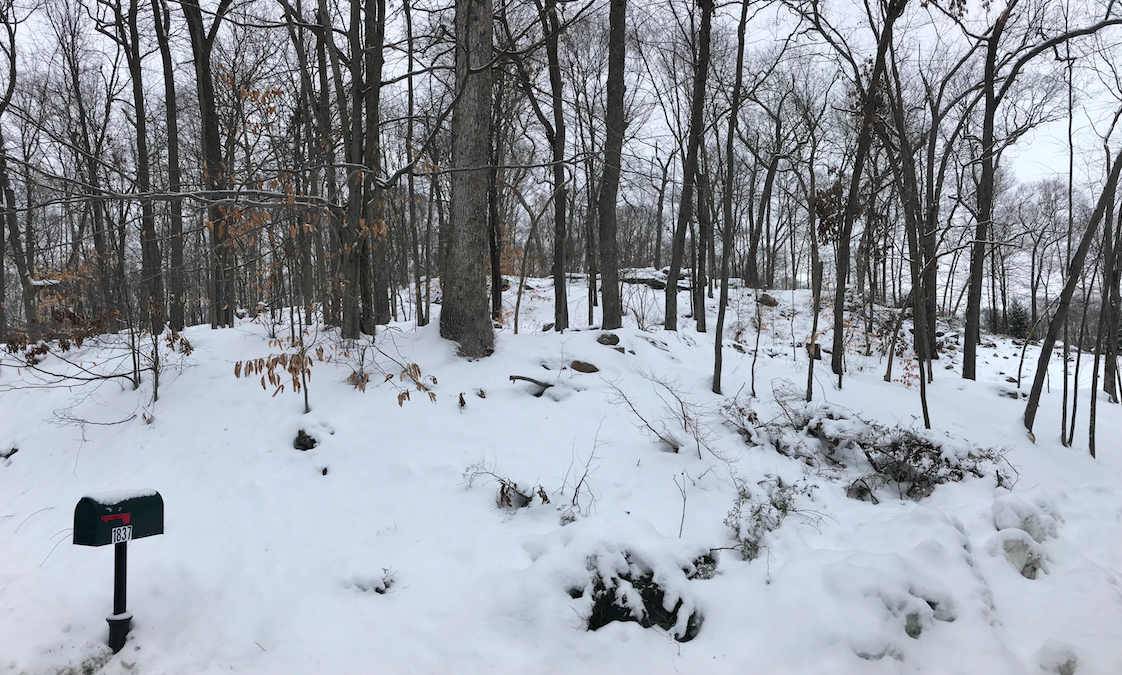 Panoramic photo of 1837 Ponus Ridge. The hilly property rises in a wood of tall trees as it runs back from the corner of Ponus Ridge at Dan's Highway, opposite the Laurel Reservoir. Credit: Michael Dinan

In a major step toward improved cell service in northwestern New Canaan, the Board of Selectmen on Tuesday voted 3-0 to approve a license agreement with a wireless infrastructure company to bring a cell tower to a wooded 5.16-acre parcel on upper Ponus Ridge. 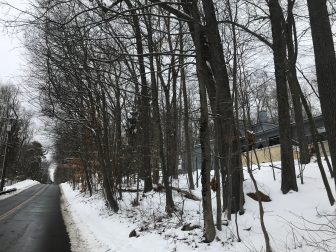 Facing north on Ponus Ridge on the approach to number 1837. The proposed cell tower will be located in the woods on the right. Credit: Michael Dinan

The combined public safety and cell tower is to be sited on the east side of Ponus Ridge at number 1837, a hilly property located just north of Dan’s Highway that overlooks the Laurel Reservoir.

New Canaan itself qualifies as a “carrier” for the public safety portion of the tower, and plans call for a traditional carrier such as Verizon or AT&T to commit to the project for when Danbury-based Homeland Towers files an application with the state agency that oversees telecom towers.

Given the detail needed for that application, it’s likely six or more months away, according to First Selectman Kevin Moynihan.

“It was a challenge with COVID last year to move this forward,” Moynihan said during the selectmen meeting, held via videoconference. “I’m very pleased to get this point.” 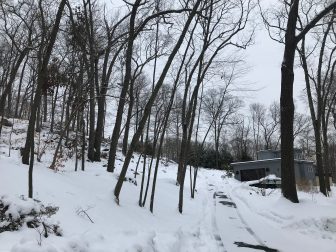 New Canaan has grappled for years with a lack of cell service in several parts of town, perhaps most notably in the northwestern and northeastern areas. Moynihan when he first ran for New Canaan’s highest elected office in 2017 had pledged to make improving cell service a priority, and began talking two years ago about installing a 110-foot-high cell tower near the reservoir.

The tower itself “will be very inconspicuous, like the one for Soundview Lane,” Moynihan said, referring to a cell tower that’s expected to be erected soon in northeastern New Canaan.

“It will be a monopine like Soundview Lane or possibly more like the tower up at Silver Hill Hospital, which is very discreet,” Moynihan said. “So this really should not be a problem, and actually the location was chosen because it really is not in view sight of any neighbor.”

Moynihan said the town had been talking to a prior owner of the property about hosting a cell tower there, yet that owner decided to sell the house last year.

“The town really didn’t want to buy a house since we already have too many buildings but we were successful in getting an investor to buy the property as an LLC,” Moynihan said.

Attorneys Joe Rucci and Amy Zabetakis of Rucci Law Group, which has offices in New Canaan and Darien, are the lawyers for what Moynihan called the “philanthropic investor” who owns the property. Tax records show the property was purchased in September for $970,000. The owner’s identity was not disclosed. Rucci Law Group is listed as managing principal of the LLC itself in Connecticut Secretary of the State records, and the deed from the property transfer doesn’t list any names associated with the 1837 LLC (which was registered June 30).

Ray Vergati of Homeland Towers said the company is “very hopeful” about bringing a traditional carrier in to support the tower application.

“It’s a desperately needed area,” he said. “You folks live there, you travel there. I don’t have to explain the critical need for these sites given the outages, the storms and so forth. Our hope is to secure the ground lease, secure the lease with the town, go forward with zoning and be able to provide public safety and cell service in the northwest section.”

Williams thanked Moynihan and Vergati for their work and called the planned tower “a huge development for the town.”

“I think, Ray, you used term ‘desperate’ with respect to the communications in the northwest portion of the town and I think that’s an appropriate term given the circumstances,” Williams said. “And I would just say, Kevin, you used the term ‘philanthropic,’ so to the owner of this parcel, thank you to that individual or individuals.”

Moynihan said that Vergati and the town are working on “other locations” for cellular infrastructure in New Canaan “and we probably will come forward with news in the not-too-distant future on that front.”

3 thoughts on “‘I’m Very Pleased To Get To This Point’: Moynihan Announces Plan for Cell Tower in Northwestern New Canaan ”