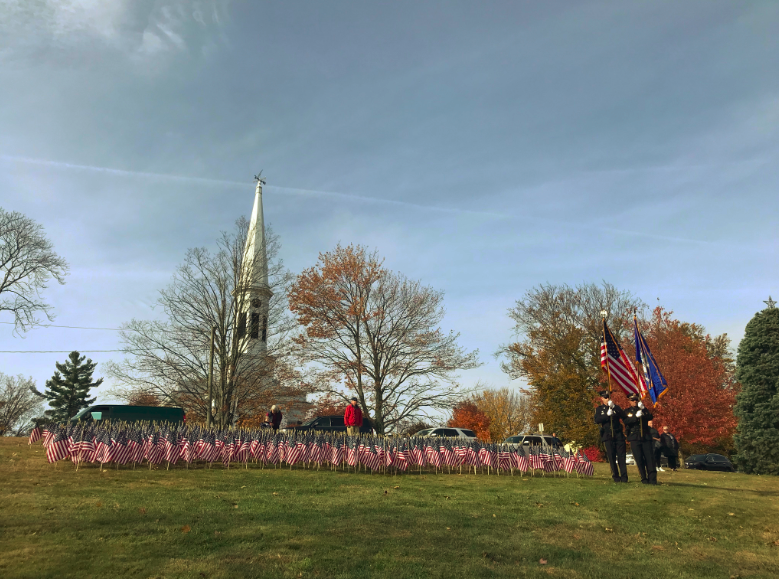 U.S. Army Col. Stephen Hamilton, chief of staff and technical director of the Army Cyber Institute, this week represented the U.S. Military Academy at the funeral of a Vietnam War veteran and Bronze Star recipient. 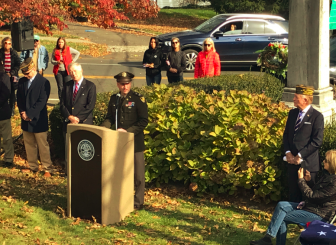 It was the third time this year that Hamilton “gave our nation’s flag to a loved one,” he said.

“Each time, I think about the sacrifices these amazing veterans made to serve our great nation,” Hamilton told more than 200 people gathered at God’s Acre on clear, comfortable Thursday morning for the town’s annual Veterans Day ceremony.

Man of those veterans “gave their life for our country in Vietnam and came home much sooner than expected,” he said. 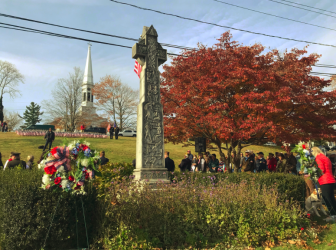 DAR members place the wreath at the Wayside Cross, at right, during the 2021 Veterans Day Ceremony on God’s Acre. Credit: Michael Dinan

An associate profession at the U.S. Military Academy and cyber officer in the Army, Hamilton was the main speaker at the solemn ceremony.

Organized by VFW Post 653 and led by the organization’s commander, Francis “Mike” McGlinn, a U.S. Army artillery officer during the Vietnam War, the ceremony included prayers led by VFW Chaplain Brian Vanderheyden, a 1965 New Canaan High School graduate and former U.S. Marine corporal and Vietnam War veteran, playing of taps by bugler Michael Mank, lowering of the U.S. flag to half-mast, tolling of bells, address by Caroline Sparico of the Daughters of the American Revolution, placement of a wreath at the Wayside Cross by the DAR and a reading by McGlinn of John McCrae’s poem “In Flanders Fields,” which in years past had been recited by former VFW Commander Peter Langenus, who died in 2020. This year, to mark the VFW’s 100th anniversary, the ceremony also included a presentation to First Selectman Kevin Moynihan of a flag that has flown at the U.S. Capitol in Washington, D.C. 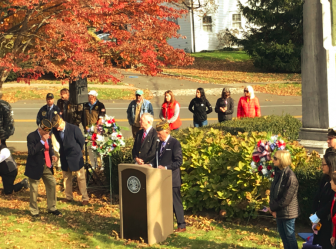 Moynihan in addressing those gathered for the ceremony noted that New Canaanites have been gathering at the Wayside Cross every year to honor veterans since the monument went up at the foot of God’s Acre in September 1923 as a World War I memorial. Toward the top of the hill, Moynihan said about 600 U.S. flags were planted in the ground to represent more than 2,200 New Canaanites who have served during wartime. They include veterans of the American Revolutionary War (131), Civil War (225), World War I (259), World War II (1,093), Korean Conflict (269), Vietnam War (147) and Desert Storm and Global War on Terror (104), Moynihan said.

“Today we honor all of those New Canaan natives who have served to help keep America free,” he said. 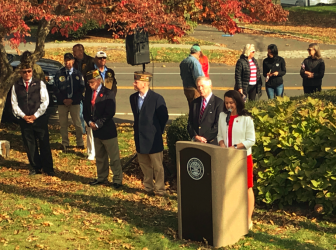 Caroline Sparico of the Daughters of the American Revolution addresses attendees during the 2021 Veterans Day Ceremony on God’s Acre. Credit: Michael Dinan

Vanderheyden said that on Veterans Day we remember those who gave “the greatest gift to our nation.”

“Their lives,” he said during a closing prayer. “Their duty, their honor and their lives are precious gifts that must be even to the future of our country and families. We honor that service and sacrifice today and carry it forward for our children, to love. We are here to remember the most honorable amongst us and we must continue to carry the burden of their sacrifices, lest we lose what true freedom is. we remember today, Veterans Day, our veterans. Dominus vobiscum. Amen”

Hamilton in his remarks said that “future war seems to have shifted” to something “less tangible” than in the past, to “the cyber domain.” 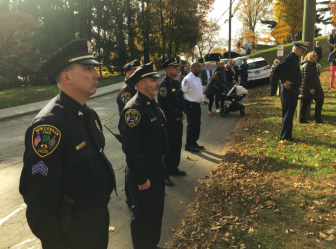 Those behind the attacks have disrupted access to and also used the Internet to create real-world problems for their targets, including destruction of machinery. he said. In 2016, Russia used social media to incite rage in U.S. citizens during the election, Hamilton said, and leveraged “troll farms” again to reach an estimated 140 million Americans per month in the run-up to the 2020 election.

“But it is not all bad news,” Hamilton said. “In 2018, the U.S. Cyber command blocked access to the Russian Internet Research Agency seeking to sow discord among Americans during the 2018 midterms. This was one of the first publicly known events of Offense cyber conducted by the U.S. against Russia.” 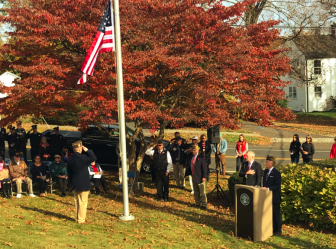 He continued, “So what does this mean for the ‘next war’? I don’t think the next war will be a clear cut war as we have seen in the past. The Army is preparing for what we call ‘multi domain operations’ where land, air, space and cyber are synchronized to provide effects anywhere on the planet, however, I think we will be sitting more in a competitive phase with kinetic war as a last resort. There will be much greater involvement of citizens as the lines are blurred between citizens expressing their opinions online compared to nation states trying to influence and turn our citizens away from our government and military.”

Hamilton said that veterans “know to remain vigilant in wartime,” and urged everyone to remain “vigilant when you get on the Internet.” 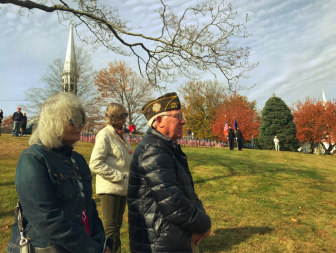 “There is no battlefield dividing lines—a simple quote, Tweet or post could have come from our adversary with the intent of getting into your head—so be careful and verify your sources of information while onlien,” he said.

“Finally, I’d like to say to all the veterans, your duty isn’t quite done—you have sown the commitment to our country, and our country needs you now more than ever,” Hamilton said. “You are patriots. Spread the word. Combat online disinformation narratives. America is the most amazing country the world has ever seen. Other nations are jealous of our free speech and our democracy. Is it perfect? No. Are humans perfect? no. But the ideals upon which we are founded are the guiding principles for which we should act. You took an oath to defend our Constitution against all enemies, foreign and domestic. With the prevalence of social media and technology in our everyday lives, the enemy can easily enter our country through our phones and computers. These enemies are ever present in online social communities, on fake news websites, and faked videos lying to our people and leading our citizens astray. Veterans are a core component of our society, spread out throughout our nation. I ask you to continue to express to all citizens how great it is to be in this country, the land of the free. Only as a unified nation will we be able to win against our adversaries and competitors in the next war, which I would argue has already begun.”

Please note: On November 27th, a number of community groups in New Canaan will place wreaths on graves in honor of New Canaan’s deceased veterans.  The annual effort is organized by the VFW and covers all of the known veterans in New Canaan’s public and private cemeteries.  The effort is supported financially by the Exchange Club, which provides the wreaths at cost, money raised from poppy sales over Memorial Day weekend and private donations. If you know of a recently deceased veteran buried in New Canaan or if you would like to contribute to the annual cost of purchasing 1,200 wreaths and bows, please contact Mike McGlinn at 203-962-1302 or email at michael@mcglinnins.com. More information here.